Large military bases operate like small cities, often with their own zip code.

Therefore, you can live and exist on the base and access shopping, entertainment, and social events all on base.

Also, military bases typically have troops, their families, and many civilian employees who all work together to keep the military installations going.

We put together a list of the eight biggest military bases in the United States, along with some details highlighting the mission of those bases.

If you are looking for the biggest military base in the United States, you must first head to Fort Bragg in North Carolina.

Fort Bragg is the largest military base between all the branches if you look at the population.

The mission of Fort Bragg is to train, equip, and deploy a wide variety of combatants.

Also, this biggest military base is the home to the Special Operations Forces and Airborne.

Fort Bragg began as a place to train for artillery during World War I.

Today, Fort Bragg is home to many units.

Furthermore, several units, groups, and squadrons at Fort Bragg help make this base the ‘center of the military universe.’

It’s also considered by many as one of the best military bases for families.

When the military needs a lot of room to deploy and train heavy forces, they look at Fort Hood.

Also, Fort Hood is large in size, but many people live and work on the base.

The establishment of Fort Hood came about because the US needed a lot of space to practice with tank destroyers during World War II.

As it happens, Texas has a lot of space, and Killeen became the space where the War Department wanted to set up this training.

Fort Hood is an Army post and is home to Divisions, Commands, Units, and Brigades.

The 1st Medical Brigade handles medical care for those at Fort Hood.

The First Army Division West, also on Fort Hood, is a field army that handles security operations and training support.

Several other groups at Fort Hood combine to make Fort Hood one of the largest military bases in the United States.

#3. Fort Campbell: On Its Way to Being Biggest Military Base

Fort Campbell got its name from an Army Brigade General.

Also, this contender for the biggest military base continues to grow rapidly.

Fort Campbell is a well-known military base and is the second-largest base in the world.

Also, officials expect the population to eclipse that of Fort Bragg eventually, which will make Fort Campbell the biggest military base.

There are several units at Fort Campbell, including the 101st Airborne Division.

The 101st is known as the “Screaming Eagles,” and the unit specializes in air assaults.

This special operations force handles helicopter aviation support, and its missions often happen at night and with a sense of urgency.

Next, the 5th Special Forces Group resides at Fort Campbell.

This highly decorated unit handles unconventional warfare, weapons of mass destruction, and deals with missions in Central Asia, the Middle East, Africa, and the Persian Gulf.

Also, Fort Campbell is home to the 52nd Ordnance Group, a response team for chemical and biological weapons and other explosive devices.

Other units at Fort Campbell are the hospital, training facilities for Air Assault, and a noncommissioned officer academy.

The Marine Corps Air/Ground Combat Center is in the desert of Southern California.

This facility has the unique purpose of providing live-fire training and readiness for the tenant commands.

The tenant commands at 29 palms are as follows:

There are both active-duty troops and Marine Reserves at 29 Palms, and there are 11 different units on base.

Some of the units include the Expeditionary Warfare Training Group, Atlantic.

There is a training group dedicated to the Pacific, as well.

Also at 29 palms is the Marine Aviation Weapons and Tactics Squadron One.

This squadron provides advanced tactical training to support the readiness of Marine Aviation.

The area used for training at 29 Palms is a shared-use area.

Furthermore, the Johnson Valley is a part of the Department of the Interior, and there is special land set aside for the Marines; the rest of the area is for public recreation.

The Joint Base Lewis-McChord base is a new installation that combines Fort Lewis and McChord.

Each of the bases themselves has been around individually for a long time, but the joining effort is new.

The most significant section of this joint base is the Yakima Training Center.

The Joint Base Lewis-McChord falls under the Army despite being a joint base between the Army and the Air Force.

The base is a mobilization center for all branches and also serves as a training facility.

Also, the location of the joint base gives the area an advantage.

The base is close to the ports in the state of Washington as well as an international airport.

Also, the joint base is home to the I Corps.

The I Corps is a part of the United States Army Pacific, and it handles the administration of the Army units in the Asia-Pacific area.

Furthermore, the 62nd Airlift Wing, which belongs to the Air Force, is at the Joint Base Lewis-McChord.

Fort Benning is one of the biggest military bases, and its size means it begins in Georgia and ends in Alabama.

Not only does Fort Bragg have a hefty combined population, but the number of active-duty troops assigned to Fort Bragg is also nearly 46,000.

When Fort Benning first came into being, it had a job to train units during World War I.

These days Fort Benning is home to several units.

For instance, the United States Army Infantry School is at Fort Benning.

The Infantry School dedicates itself to the training of infantrymen.

Furthermore, the school’s components include the 197, 198, and 199th  Infantry Brigades.

Fort Bliss trains and deploys all those part of the joint team all over the world.

Therefore, Fort Bliss is a full-spectrum operation and a part of a national military strategy team.

Also, the 1st Armored Division is called “Old Ironsides.”  This division is the oldest armor division in the United States Army.

The AAMDC organization operates on a 72-hour mission.

Also, the AAMDC has four brigades with their own separate and supportive missions.

The 93rd Military Police Battalion, the War Eagles, is at Fort Bliss.

Furthermore, Fort Bliss is home to the Mobilization Brigade.

The Mobilization Brigade handles both mobilization and demobilization. Think of this Division as the administrative side of supporting units.

Also, there are several other units at Fort Bliss. These include the 407th Army Field Support Battalion, Joint Modernization Command, and the Conus Replacement Center.

While not a large base according to population, the White Sands Missile Range deserves mention based on its sheer size.

The first atomic bomb test happened at what is known as the Trinity Site at White Sands Missle Range back in 1945.

The missile range is in the Tularosa Basin, close to 20 miles to the east of Las Cruces, New Mexico.

Also, it is about 45 miles from El Paso, the location of Fort Bliss.

You can drive through the area, but the Army closes off roads when testing.

Today, White Sands is an area where the Army does its missile testing and recovery operations.

It is an open-air range and is the Department of Defense’s largest.

White Sands is accessible to all branches of the Armed Forces and our allies.

Also, it is space for defense and technology researchers to develop, test, and evaluate weapons. Plus, White Sands Missile Range overs ample space to train. 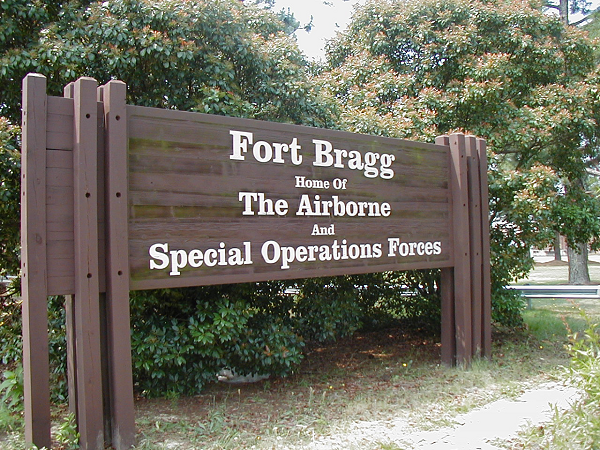 Largest Military Base In US

Check out our list of the 8 largest military bases in the US. This list is based on population, as well as physical size in square miles.

2 Replies to “8 Biggest Military Bases in the US”