There are a total of 7 military bases in Puerto Rico.

The Marine Corps nor the Navy have bases stationed here.

All bases here serve as important rallying and staging point for the United States and its allies.

Puerto Rico has been a strategic military and commerce point since the United States was founded.

It continues to be vital in operations all around the world.

Overall Mission: This is a joint training base for America’s Armed Forces and allies.

The U.S. Army, Air National Guard, and U.S. Army Reserves all use this base for training and a staging point during wartime.

The base is also used for the youth of the military, as a summer encampment to enjoy time with friends while learning about the military.

Overall Mission: All branches of the Armed Forces use this base for training and as a staging point for operations.

The base also serves as a support system for locals during natural disasters, such as hurricanes.

The base is mostly used to house U.S. Army reserve units but it does have 3 units stationed here.

Overall Mission: The base originated as a staging point for the Army Air Corps during W.W.2.

Since 1980, there have been no active duty units from any branch of the Armed Forces stationed here.

This is where the Puerto Rico National Guard to has their Officer Candidate School on the base.

Overall Mission: This is where the Puerto Rican Air National Guard is headquartered.

The base also serves as a humanitarian aid station for local natural disasters.

The base serves a rally and distribution point for U.S. Armed Forces during wartime.

Overall Mission: The main goal of the base is search and rescue in the surrounding areas.

The base also provides logistic, aerial and law enforcement services and support for any operations in the area.

It was an important staging point in wartime for the U.S. Armed Forces and its allies. 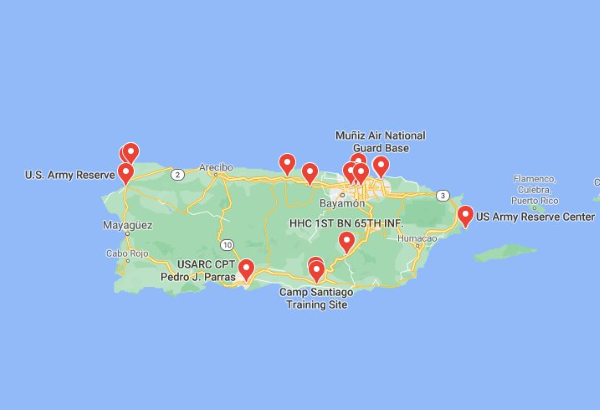 Puerto Rico is home to 7 major US military bases. They include bases for the Army, Air Force, and Coast Guard, learn more about each one here.