There are a total of 12 military bases in Oklahoma.

The Navy does not have any active bases in Oklahoma, nor do they have any detachments on other bases within the state.

The Navy does still use some of the other branches bases for training.

Being central in the United States, these bases are vital in logistics and troop movements.

It also has one of the largest Artillery training facilities in the country.

The Base is also one of the 4 bases that conducts Army Basic Combat Training.

It is a major training facility for all branches of the U.S. Military, and at 94,000 acres in size, is considered the largest military base in Oklahoma.

Overall Mission: Weapons and munitions manufacturing for the Department of Defense.

They produce, recycle, or dispose of munitions from the U.S. Government or any other source that they may receive from.

They are the largest stockpile holder of the Department of Defense, holding 1/3 of their stockpile.

Also conducts training for support and maintenance units that support that pilot programs.

The base does all the retirement phases of old aircraft, while also doing a lot of training for the new aircraft.

Here, Pilots can practice landing and taking off in smaller training aircraft.

This landing strip and small airport are vital in military pilot training programs.

Overall Mission: The base handles maintenance and overhauls for the Department of Defense.

The base is also a big training facility and logistics hub for multiple branches of the military.

The base houses the U.S. Navy Strategic Communications Wing and the Defense Logistics Agency.

Overall Mission: The base serves as a rally point for reserve battalions for the U.S. Air Force.

They will mobilize in the event of domestic issues, such as protection of public services, search and rescue missions, disaster relief, and more.

They play a vital role in storage, training, and logistics in peacetime.

Overall Mission: The base is the home of the Air Education and Training Command, and is one of the largest military bases in Oklahoma.

This base trains pilots for the U.S. Navy, Marine Corps, Air Force, and its allies across the globe.

This base is vital to the strength of the U.S. military around the world.

Will Rogers ANG Base

Overall Mission: The base was designed to be a training facility in the 1940s, they trained all branches of the military

There were a total of 16 units on the base when it was in operation.

Overall Mission: The Marine Corps has a detachment on the U.S. Army Base of Fort Sill.

On this base they train for basic and advanced artillery techniques and procedures.

The Marine Corps also has its own artillery training bases in other states, that are not detachments on another branches base.

Overall Mission: They are a support detachment of the Container Inspection Training facility in Oklahoma City, OK.

They serve as a storage and alternative training facility for the Container Inspection Group.

This group is vital in the country’s national safety, as they detect and then dispose of hazardous materials that could endanger anyone who comes in contact.

Like most other Coast Guard stations, this is considered the smallest military base in Oklahoma.

Overall Mission: The Coast Developed this program to regulate and inspect hazardous materials in water-based shipments.

This base is a rally point for instructors and their team, who then travel to locations and conduct their training. 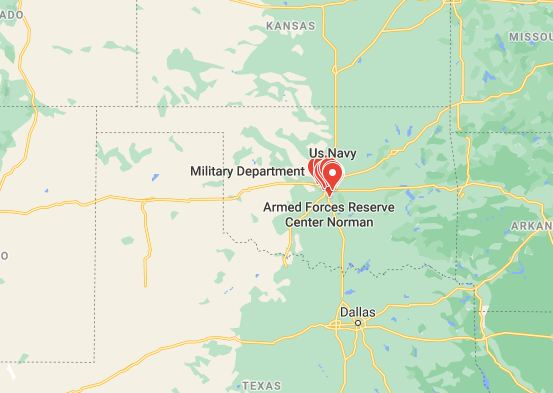 Oklahoma has 12 major US military bases that are from every branch of the military. Learn more about each base here, including when it was founded, its overall mission, and location.