As happens with many public figures, there is confusing information about Florida’s 46th governor, Ron DeSantis, and whether he served as part of the United States Navy Sea, Air, and Land Teams—more commonly known as Navy SEALs.

So, was Ron DeSantis really a Navy SEAL? No, he was definitely not.

With that said, DeSantis did serve in the military and did, in fact, work very closely with the Navy SEALs during a deployment to Iraq in 2007.

In this article, we’ll address the Florida governor’s actual association with the Navy SEALs, as well as his background and military career.

Related Article – Was MrBallen (aka John Allen) A Navy SEAL?

Who Is Ron DeSantis?

Ron DeSantis is the Republican incumbent governor of Florida.

He is likely to pursue a second term as governor for the 2022 election cycle in addition to other potential political aspirations.

Ronald D. DeSantis was born in Jacksonville, Florida, on September 14, 1978.

At age six, his family relocated to Dunedin, Florida, where he was raised.

He then on to earn his undergraduate degree (Bachelor of Arts) in history from Yale University in 2001.

Later, he attended Harvard Law School and graduated with his J.D. in 2005.

Upon his graduation from Harvard Law School and Naval Justice School, DeSantis began his military career as a Naval officer.

He spent approximately six years on active duty before transitioning to a career in politics.

Following his military service, DeSantis was elected as a Republican from Florida’s 6th congressional district to the U.S. House of Representatives.

He served as a Republican congressman in this district from 2013 to 2018 and was especially known for his fiscal conservatism.

During his time in the U.S. House of Representatives, Ron DeSantis served on several committees.

These committees and his held positions on subcommittees include:

DeSantis has held the office of governor of Florida since 2019 (elected in 2018).

In Florida, there is an election for governor every four years.

There is no established lifetime limit on the number of times a person can be elected as Florida governor.

However, anyone who has been elected to two consecutive terms as governor of the state must be out of the office for at least one full election cycle before they are eligible for re-election.

As the incumbent Republican, Governor Ron DeSantis is reportedly running for a second term in the November 2022 Florida gubernatorial election.

In 2004, Ron DeSantis was commissioned as a Reserve Naval Officer at the U.S. Naval Reserve Center in Dallas, Texas.

He was assigned to the Navy’s Judge Advocate General’s Corps (JAG) while a student at Harvard Law School and completed U.S. Naval Justice School the next year.

In 2006, he was promoted to lieutenant and worked for the Joint Task Force-Guantanamo Commander (JTF-GTMO) with the title of JTF-GTMO scheduler/administrative officer.

He reportedly worked directly with detainees, performing legal and mission support duties, at Guantanamo Bay Joint Detention Facility until 2007 when he reported to Naval Special Warfare Command in Coronado, California.

In the spring of 2008, DeSantis was reassigned to the Naval Region Legal Service in Florida.

He was appointed as an assistant attorney at the U.S. Attorney’s Office in Florida’s Middle District.

DeSantis served as a trial defense counsel until he was honorably discharged from active duty in early 2010.

He concurrently accepted a reserve commission as a lieutenant in the JAG of the U.S. Navy Reserve.

During his military career, DeSantis was awarded a bronze star medal for meritorious service, October 2007 to April 2008.

For his prosecution of court martial cases as well as federal court cases involving procurement fraud and military medals fraud, DeSantis was awarded a Navy and Marine Corps Commendation Medal.

Ron DeSantis & His Role With The Navy SEALs

Though Ron DeSantis was not a Navy SEAL, he did play a role in advising a SEAL team in 2007.

In that year, at the Naval Special Warfare Command Group in Coronado, California, DeSantis was assigned to Navy SEAL Team One.

He deployed to Iraq during the U.S. military troop surge at that time.

DeSantis played an advisory role to the commander in support of the SEAL mission in Fallujah, Ramadi, and the remaining area of Al Anbar province.

In this capacity, DeSantis oversaw the treatment of detainees to ensure humane conduct toward them while in Iraq.

It is reported that he worked to protect the rights of approximately 100 detainees during this time.

In addition, he monitored the missions of Navy SEALs and Army Green Berets in his jurisdiction to ensure they followed and adhered to the rule of law.

This monitoring included making sure that interrogations followed the rules of the U.S. military and the Geneva Conventions.

Military records substantiate DeSantis’s duties in Iraq and the Arabian Peninsula during 2007 and part of 2008, described as follows:

Therefore, though Ron DeSantis was not a Navy SEAL himself, he did play a role as legal advisor to SEAL Captain Dane Thorleifson, commander of Special Operations Task Force-West in Iraq.

Related Article – How To Check If Someone Was A Navy SEAL

For many politicians, a military service record and background can earn them a substantial amount of support among active duty service members, veterans, and pro-military voters.

Moreover, accurate federal records of military experience are important among all who have served, including politicians.

This provides confirmation of facts for the public.

It also reduces the amount of misinformation and/or assumptions related to the military careers of public officials.

Ron DeSantis’s military records substantiate his service as a Naval officer in many roles.

Since Ron DeSantis’s transition to political office, as a Florida congressman and then as the state’s 46th governor, there has been speculation that he was a Navy SEAL.

Though DeSantis did have a military career as an officer in the U.S. Navy, he was not a Navy SEAL during his time of service.

However, he did serve as close legal counsel to a Navy SEAL commander while deployed to Iraq in 2007 and 2008.

In addition, DeSantis provided mission support and legal monitoring within his jurisdiction during that time.

This was to ensure humane treatment of detainees as well as adherence to the rule of law among military personnel.

Ron DeSantis’s role in working with Navy SEALs is likely the reason that some people wrongly assume that he was a Navy SEAL himself. 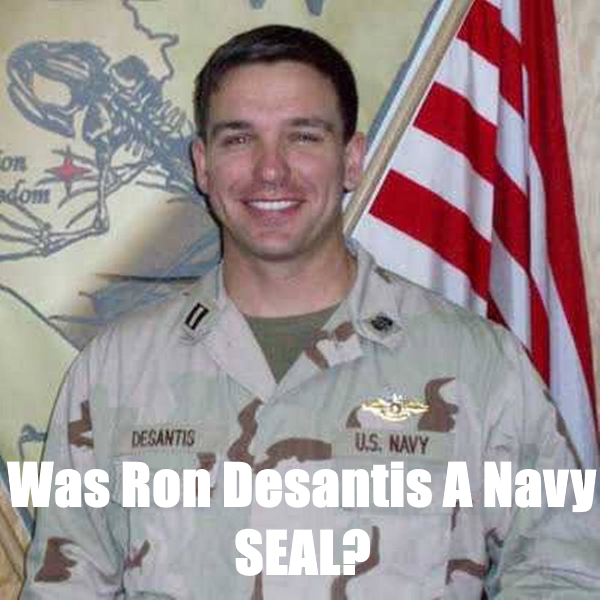 Was Ron Desantis a Navy SEAL? No, but he did serve as a US Navy JAG officer, and did work alongside a SEAL Team during his time in Iraq. Learn more here.