Since October 2020, all Army soldiers, no matter their age or gender, are required to pass the ACFT (Army Combat Fitness Test).

This test is part of soldiers’ overall military training, though minimum requirements for passing may vary depending on the type of job or unit.

The ACFT is made up of six events, designed to test combat readiness in terms of physical ability.

The standing power throw (SPT) is the second event of the ACFT.

What Is The Standing Power Throw?

During the standing power throw event, you are tested on your physical ability to toss a 10-pound medicine ball over your head, behind you, as far as possible and without crossing the throw line.

The goal of the SPT is to achieve the greatest distance.

Soldiers use specific physical techniques and strength to throw the weighted ball overhead and backward.

This event provides an assessment of a soldier’s muscular explosive power for quick movements.

These actions may be necessary during combat.

Such tasks and scenarios may include:

The standing power throw is the second of six events that make up the ACFT.

It is conducted after the three-repetition maximum deadlift and before the hand release push-up events.

Step 1 (Starting Position): Stand facing away from the marked lane start line with your heels in front of the fault/throw line. **Heels cannot be on or over the throw line.

Step 2: Grasp the medicine ball firmly around the sides with both hands and hold it at hip level. If there is moisture or debris on the medicine ball, remove it with a towel before executing the throw.

Step 3: When the lane grader and ball retriever are ready, the grader will direct the soldier to execute their first throw. The soldier may use preparatory movements. This includes flexing the hips, trunk, and knees when lowering the medicine ball between the legs.

Step 4: Soldiers are allowed two record attempts for the SPT. Once the soldier has performed two record throws, they move on to the next event.

The soldier’s feet can leave the ground during a throw. However, if they touch or go over the throw line upon landing, this is considered a fault.

Step 5: Both record throws are recorded for the soldier. The longer of the two throws counts as the record score, indicated by the start line grader.

The top score for SPT is 100 points and would measure a 12.5-meter distance or greater.

The lowest passing score is 60 points, measuring a 4.5-meter distance at minimum.

The ACFT scoring system is gender neutral. This means that the scoring scale for each test, including the standing power throw, is exactly the same for males and females.

If the soldier falls to the ground or steps on or beyond the start line, this is considered a fault and the record attempt does not count.

A raw score of 0.0 meters is noted if the soldier faults when executing the first record throw.

If they fault on the second record throw, they receive the same raw score of 0.0 meters again and are allowed one final attempt to score.

If the soldier faults on all three attempts at a record throw, their raw score of 0.0 meters remains for the SPT event.

However, if the soldier has achieved a valid score on either the first or second record throw, they are not allowed a third attempt.

If the medicine ball is thrown into a different lane, the distance recorded is at the point the ball crosses the lane line—not the point at where the ball lands.

Any score below 60 points for this particular test is considered below the Army minimum standard.

If a soldier fails to achieve the minimum of 60 points for SPT, they not only fail the individual test but the ACFT as a whole.

This means that the soldier will have to retake the entire ACFT to meet Army standards.

How Can I Prepare For The Standing Power Throw Test?

Training for the standing power throw test should include explosive movement in addition to balance and flexibility.

This event demonstrates muscle strength in the legs, core, shoulders, and back.

Maintaining proper form for this test will ensure better results and less risk of injury or faults.

There are ways that you can prepare for the SPT in order to get the best possible score on this test.

Some helpful preparatory exercises include:

Performing these preparatory exercises, as with any conditioning drills, should be done as directed to minimize the chance of injury.

Each event of the ACFT is designed to incorporate and assess physical fitness components to determine a soldier’s military training and combat readiness.

The standing power throw is designed to measure a soldier’s explosive power, balance, and flexibility.

Meeting the passing standards for this test indicates that a soldier is physically fit, prepared to fulfill their job duties, and committed to their training. 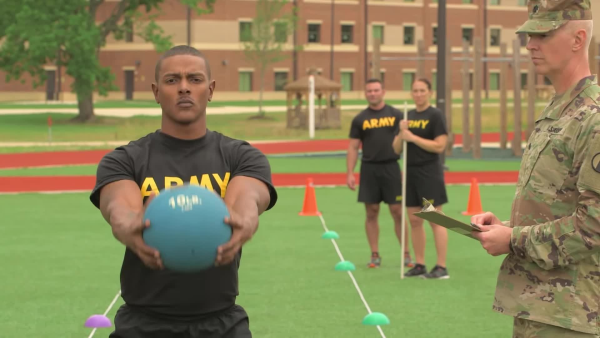 The standing power throw, or medicine ball throw, is an event on the Army Combat Fitness Test (ACFT). Learn more about the test here.