The Army has a long history that pre-dates the official start of the United States, and some of these Army facts for kids might come as a surprise.

From the beginning of the Army during the Revolutionary War to the incredible number of Army bases all over the world, the Army has a rich history to explore.

The Army goes back to 1775 when congress created the Army to fight Britain during the Revolutionary War.

George Washington was the Army’s first commander during the war, but the Army was disbanded after the war until the country realized we needed to keep the Army around even if there was not a conflict.

The Army has a lot of weapons in its arsenal. However, the M4 Carbine is the most common weapon used by soldiers.

The M4 Carbine is a compact version of the M16 rifle.

The Army’s special forces have a history back to World War II.

Also, special forces go all over the world, even during times of peace.

While we think of special forces related to combat, the soldiers spend a lot of time working with ally troops.

Many people do not realize that the Army had the job of mapping out the United States.

Therefore, the Army worked with Louis and Clark, and Army personal were some of the first Europeans to see the Grand Canyon.

Ronald Reagan was the 40th president, and he is the most recent president to serve in the Army.

During the Revolutionary War, many women served as spies for the United States Army.

Anna Smith Strong was a spy in George Washington’s spy ring, and she helped deliver information about British troops.

Close to 70 percent of the awarded Medal of Honors have gone to Army Soldiers.

The Medal Of Honor is the highest award for a soldier’s show of bravery during combat.

Pilots struggled with glare while in flight, and Lieutenant General John MacCready talked to Bausch & Lomb about a solution to the problem.

Dogs serve in all branches of the military, Army included.

As part of a tradition, all dogs have the rank of Noncommissioned Officer, and the dogs have one rank higher than their handlers.

The Army is everywhere. There are approximately 5,000 Army bases, with several hundred of them in other countries.

If learning army facts for kids is fun, consider joining the Army to be a part of the history.

The Army has strong roots from the very beginning of the United States.

Along the way, the Army evolved including its use of weapons, the use of spies, and even changed the shape of fashion with sunglasses.

The Army is sure to continue to grow, and you can become a part of its rich history. 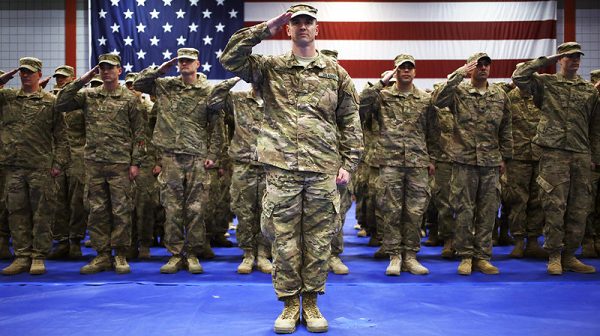 See 10 Army facts for kids, including the history of the Army, Special Forces, weapons used, and much more.