Most recruits go into the Army with the best of intentions. However, in the early days of service, some soldiers wonder about the Army Chapter 11 discharge.

There are several different types of discharges or separations from the Army, but Chapter 11 discharge has a specific purpose and set of conditions.

Related Article – 6 Ways To Get Out Of The Military Early

In the case of an Army Chapter 11 Discharge, a new soldier within the first 180 days of service qualifies for this type of discharge.

Many people refer to the Army Chapter 11 discharge as an Entry Level Separation (ELS).

Usually, the Entry Level Separations occur before a recruit makes it through basic training and is considered for an administrative discharge.

A soldier in boot camp cannot necessarily request this type of discharge if they think the military is not a good fit for them.

Instead, the Chapter 11 discharge is a commander decision based on a specific set of criteria.

Despite the Army Chapter 11 being a commander decision, there are expectations and criteria to meet before the discharge.

Some reasons trigger a Chapter 11 discharge. Also, there are opportunities for rehabilitation and counseling to prevent this type of administrative discharge from happening.

Some soldiers struggle to adapt in the Army.

This lack of adapting comes through by not performing well in training or by struggling with following orders.

The military works to shape recruits into soldiers, and some recruits cannot adapt to this new way of thinking.

In that case, an Army Chapter 11 Discharge is likely.

Lack of Aptitude and Effort

Sometimes, soldiers struggle with having the aptitude to find success in boot camp. It may not always be a lack of effort, rather a lack of ability.

Other times the ability is present, but the soldier lacks the self-discipline necessary to put in the effort to find success.

In either case, the lack of aptitude or effort is why a commander can proceed with a Chapter 11 discharge.

It is worth noting that commanders are aware new recruits will pretend to lack the effort to force a discharge, and several steps and counseling events work to prevent this.

Sometimes soldiers show a lack of character during the first 180 days of service.

Lack of character might show up as not following orders.

Other times the lack of character becomes evident as behavior and character characteristics demonstrate qualities that are not in line with the Army’s values.

Failure to Respond to Counseling

Soldiers showing signs of the inability to be successful within the first 180 days receive counseling.

The goal of counseling is to determine the problem or area of weakness. Next, the counseling serves to create a plan to set goals and the actions needed to achieve those goals.

Many soldiers do well with counseling to target specific behaviors, but other soldiers fail to respond to counseling.

Counseling is a step to prevent recruits from receiving a discharge, and failure to comply or be successful with counseling leads to the administrative Chapter 11 Discharge.

If the Army determines the soldier was pregnant when they enlisted, there will be a medical disqualification from service.

If the soldier becomes pregnant after beginning her service, she can request a discharge if she did not complete her technical school training.

A commander must meet specific criteria with the discharge.

It must be clear the soldier will not be able to participate or complete training for whatever the reasons mentioned above.

The circumstance must be enough of an issue that by keeping the soldier, the result is the unit will be negatively impacted.

There must be a good chance the soldier would be disruptive in the future and not receive promotions.

Related Article – What Happens If You Get Pregnant In The Military?

If you find you are facing an Army Chapter 11 Discharge, know you have the right to talk to an attorney. This attorney can be either a military or private attorney.

You will want to ensure the commander met all criteria before the discharge and the results of counseling did not lead to success.

Also, some prior service members look for an attorney to upgrade or change their status because there is a worry an Entry-Level Separation looks bad for the service member.

#4. What Type of Discharge Will I Receive?

The Army Chapter 11 administrative discharge does not have a good or bad label attached. Therefore, the discharge is uncharacterized.

It is uncharacterized because the recruit was not in the Army long enough to establish their discharge character.

Despite not having a character on the record, usually, a reason is listed on the paperwork. For instance, training performance might be a note for someone unable to get through boot camp.

Reenlistment after an Army chapter 11 is possible in certain circumstances.

Upon separation, military personnel receives a form called the DD 214.

This form gives codes for the discharge or separation.

There is no service characterization in the case of an administrative discharge, but a reason is listed.

If you have a code of RE 1, you can reenlist easily.

If your code is RE 2, you can still reenlist, but there are some restrictions. For instance, whatever issue caused the discharge in the first place must be resolved.

A code of RE 3 means you need a waiver to reenlist.

Also, RE 4 means you cannot reenlist in the military.

Generally speaking, most of those who join the Army find success in boot camp and their jobs.

In some cases, recruits struggle and are unable to meet the demands of the Army.

For those within their first 180 days who show signs they may not succeed, the commanders have an option to administratively discharge recruits.

This type of discharge is an Army Chapter 11 Discharge, and it is also called an Entry-Level Separation.

Commanders must meet specific requirements for the discharge, and the soldier has a right to seek counsel from a military or private attorney.

In some cases, separated soldiers could reenlist in the military at a later time, but reenlistment depends on the listed reason for the operation in the first place. 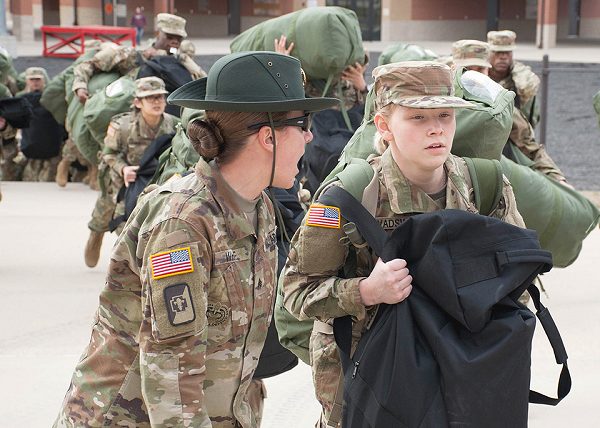 Failing to adapt to military life can quickly get you discharged from the US Army. Learn more about Army Chapter 11 discharge, including the reasons why it would happen and much more.