Florida is the 27th state admitted to the Union, and it also happens to be the state I reside in.

From its lush, tropical landscape and weather, to its white sandy beaches and cultural diversity, I personally think it’s one of the best places in the United States to live.

It also happens to be home to six Air Force bases, all of varying sizes.

Below is a list of all of these bases, including their location, units headquartered at the Air Force base, when it was built, and their official website.

In Use: 1935 – Present (Originally Valparaiso Bombing and Gunnery Base)

Overall Mission: It serves as the heart of all Air Force armories. This is where acquisition, testing, development, deployment, and sustenance of non-nuclear weapons is done. It is named in honor of Fredrick I. Eglin, a Lieutenant Colonel killed in a crash.

Overall Mission: Homestead Air Force base is home to the 482nd Fighter Wing, which is an F-16 unit providing fighter operations. This Air Force base was actually destroyed by Hurricane Andrew in 1992 and was subsequently rebuilt.

Overall Mission: It serves as an operation base for the Air Force. It is responsible for deploying and maintaining tactical emergency communication around the world in both peace and war times.

Overall Mission: Named in honor of Maj. General Mason Patrick, this Air Force base in Florida is home to the 45th Space Wing.  One of their primary objectives is the management of all launches of unmanned rockets taking off from nearby Cape Canaveral to the north.

How many Air Force bases are there in Florida?

Florida is home to six Air Force bases, from Eglin AFB, Hurlburt Field, and Tyndall AFB in the panhandle to MacDill AFB in Tampa, to Homestead Air Reserve Base near Miami, and Patrick AFB near Cocoa Beach.

Does Patrick AFB work for NASA?

Patrick AFB has provided support for NASA for over 60 years. Currently dedicated to missile launches, it serves as primary defense for the Space Coast. With existing 45th Space Wing in residence already, it was designated a Space Force base.

Is Eglin the largest Air Force base?

Located on the Emerald Coast of Florida, Eglin is the largest Air Force base in the world, measuring 640 square miles.

Homestead Air Reserve base was destroyed by Hurricane Andrew, a Category 5 storm that hit on August 24, 1992. Since that time, the base has been rebuilt and hosts the 482nd Fighter Wing.

Eglin AFB is only a few miles from Fort Walton Beach. Patrick AFB, by Kennedy Space Center, is close to Cocoa Beach. MacDill AFB is located in an urban center but boasts a recreational beach and marina on Tampa Bay. 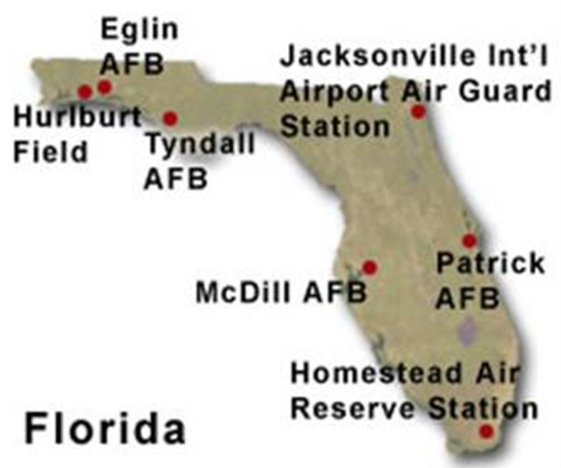