Texas is the second largest state in the US in terms of sheer size and population, second only to California (in population) and Alaska.

Being on the southern border, it also happens to be strategically important to our southern defense.

With that said, there are a number of Air Force bases located in Texas.

Some of them are quite small, and others are absolutely enormous.

Below is a list of all 7 Air Force bases in the state of Texas, ranked in no particular order.

Overall Mission: It serves as an emergency landing stage for NASA Space Shuttle orbiter and also provides airlift support and deliver bombs to combatant commanders. This base also serves as a training center for Air Force B-1 crews.

Overall Mission: This is the largest training wing for different Air Force units in US. It gives basic military training to those enlisted to join the Air Force.

Overall Mission: It is home to 17th Training Wing. This base trains members of different branches of the U.S. military including Army, Air Force, Navy, and Marine Corps in intelligence and cryptology.

Overall Mission: This is home to 82d Training Wing, whose purpose is to recruit and train Airmen and also equip them with education that enables them to deliver Air Force objectives. It is the largest training base within AETC.

Overall Mission: It provides housing options to support the transition of Air Force recruits and also offer a platform for easy integration with the military community.

Lackland Air Force Base is actually a part of Joint Base San Antonio, as well as Fort Sam Houston, Randolph Air Force Base, and Camp Bullis and Stanley.

Overall Mission: It is the headquarters of the AETC and AFPC. It serves as a training base for Air Force pilots on how to fly T 6A Texan II, T 1A Jayhawk, and the T 38C Talon. This is also home to the 12th Flying Training Wing, the 902-nd Mission Support Group, and the 359-th Medical Group.

How many military bases are in Texas?

Does Dallas have a military base?

No. The closest military base to Dallas, TX would be Naval Sir Station Fort Worth Joint reserve base. It’s located in Carswell, TX, and is just under 42 miles from Dallas.

What’s the largest military base in Texas?

How many military bases are closed in Texas?

As of January 2021, there are 98 decommissioned bases in the state of Texas. 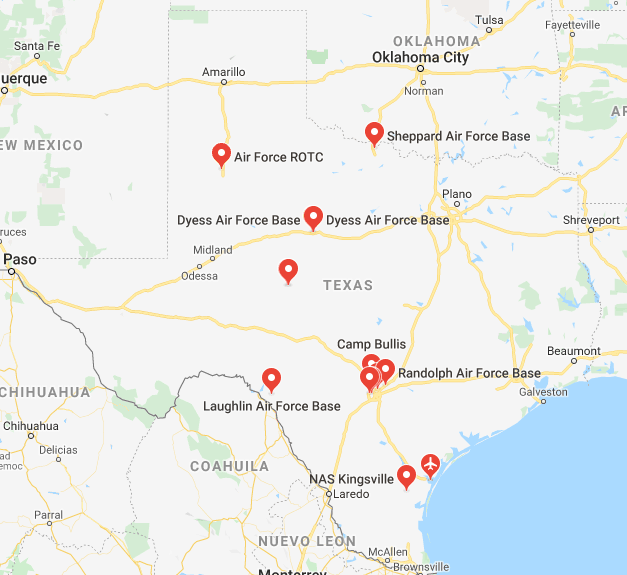 Learn more about each Air Force base in Texas, including Lackland AFB, Goodfellow AFB, Laughlin AFB, Joint Base San Antonio, and Sheppard AFB.