The chain of command exists so that the orders issued from higher up the chain flow downwards.

The Air Force chain of command, from top to bottom, goes as follows:

The President of the United States (POTUS) is at the top of the command chain in all military branches with the title Commander-in-Chief.

The power of the Secretary of Defense authority in the chain of command is second only to the POTUS.

The Secretary of Defense has command and control both operationally and administratively of all military forces.

Currently, the acting Secretary of Defense is Christopher Miller, although this will change soon due to the President-elect’s expected appointment.

Secretary of the Air Force

The Secretary of the Air Force receives their appointment by the President of the United States.

Also, the Secretary of the Air Force is a civilian, and the appointment receives approval from the Senate.

Currently, Barbara Barret is the Secretary of the Air Force.

The Air Force Chief of Staff is responsible for the USAF Active-Duty, Reserves, and Guard units in the United States and overseas.

Currently, General Charles Q. Brown, Jr. services in this position, and he works with the Secretary of Defense, the POTUS, and the National Security Council.

The Vice Chief of Staff of the Air Force presides over the Air Staff and chief of staff, handing the organization of all the USAF Active-Duty, Reserves, and Guard units.

Furthermore, General David W. Allvin is the current Vice Chief of Staff of the Air Force.

Currently, there are just over 2,000 members with the position of Chief Master Sergeant.

In the Air Force, Major Commands have their own organizations that answer to the Major Command. All numbered air forces, squadrons, and flights fall under their major commands.

General Mark D. Kelly is the Commander of the Air Combat Command, and he is responsible for ensuring all forces are ready for combat.  Also, if we are at peace, his job does not end.

The Air Education and Training Command works to train and educate members of the Air Force.

Lieutenant General Marshall B. Webbcommands this major command, which is located in Texas.

This major command handles combat support, combat missiles, all of the Air Force’s bombers, and the Long Ranger Strike Program.

The Air Mobility Command works to stay ahead of technology to ensure our warfighting concepts and systems are the best.

This major command, commanded by General Kenneth S. Wilsbach, works with allies and others to ensure stability.

Under the Major Commands are the Numbered Air Forces.

However, the NAF chain of command goes upwards to the Major Commands.

Within the structure of a NAF, there are wings, groups, squadrons, and flights, all with their own chain of command that leads to the NAF commander.

Often, the Numbered Air Forces are assigned according to a geographical assignment.

Wings have a narrow focus on a specific mission, and it is the organization that falls under the Numbered Air Forces.

A Wing is comprised of more than one group and several squadrons with one person in command.

The role of the wing is usually operational, specialized, or an air base wing.

Also, a wing has an operations, support, medical, and maintenance group.

A group in the Air Force has at least two squadrons, but only one Commander in each group.

Typically, a Colonel heads an Air Force Group. However, it is essential to remember that while there are group commanders, the groups fall under the Wing Commander’s command.

A Squadron is a basic unit in the Air Force, and it includes two flights and several aircraft.

Each Squadron has its Commander, who answers to the group commander. You would expect the Squadron Commander to be a Field-Grade Officer, Major, or Lieutenant Colonel.

A Squadron is considered a lower level of command.

Since each Squadron has two flights, you should evaluate the command and structure chain within a flight.

The flight is the smallest grouping within the Air Force. There might be over a hundred people in a flight, but it is not unusual for a dozen people to make up a flight. Also, each flight has four aircraft.

Typically, a flight commander is a captain or a flight chief.

Your first step up your chain of command includes your flight commander because they handle day-to-day operations regarding people and equipment. 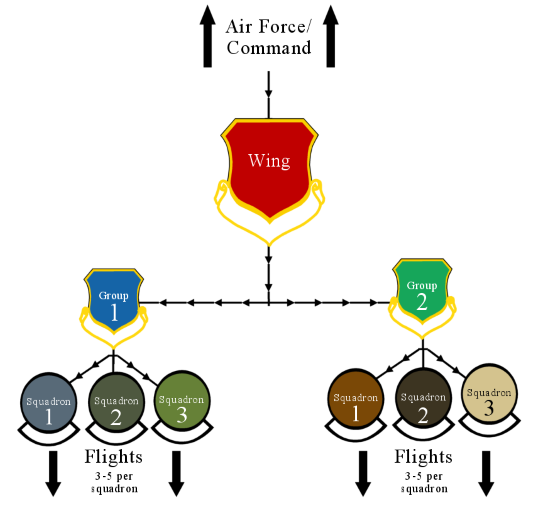