Started in 2007 by then Chief of Staff of the US Air Force General T. Michael Moseley, the Airman’s Creed was created for members of the Air Force.

The purpose and intent behind the Airman’s Creed is simple…it was established to create a strong bond between all members of the US Air Force.

Memorized by all members of the USAF, both enlisted and officers, the creed was designed to give everyone serving a sense of purpose and pride.

I am a Warrior.

I have answered my Nation’s call.

My mission is to Fly, Fight, and Win.

I am faithful to a Proud Heritage, A Tradition of Honor, And a Legacy of Valor.

Guardian of Freedom and Justice, My Nation’s Sword and shield, Its Sentry and Avenger.

I defend my Country with my Life.

Let’s go through each line of the Airman’s Creed and take a look at the meaning behind each.

“I am a Warrior.” – As part of the strongest and most powerful Air Force the world has ever seen, Airman take the fight right to the enemy. Just like a true warrior would.

“I have answered my Nation’s call.” – No matter the reason why you chose to join the Air Force, you have still ‘answered your nations call’.

“My mission is to Fly, Fight, and Win.” – The mission behind any branch of the military is simple, fight and win wars.  As a member of the Air Force, you have a unique ability to defeat your enemy from the air.

“I am faithful to a Proud Heritage, A Tradition of Honor, And a Legacy of Valor.” – Since the US Air Force was founded in September of 1947, it has had millions of airmen and women pass through the ranks. Their tradition of honor, pride, and legacy of valor lives on today.

“Guardian of Freedom and Justice, My Nation’s Sword and shield, Its Sentry and Avenger.” – The mission of the Air Force is to support and defend the constitution of the United States of America. As an Airman, you have the responsibility to guard the American people, and to seek justice through superior firepower.

“I defend my Country with my Life.” – If necessary, any Airman will make the greatest sacrifice of all when it comes to defending the country. And that sacrifice will not be taken lightly.

“Wingman, Leader, Warrior.” – As an Airman in the US Air Force, you are a wingman, a leader, and a warrior. Essentially this means that you are responsible to the man and woman to your left, and to your right.

“I will never leave an Airman behind, I will never falter, And I will not fail.” – Following on the above, Airman do not leave a fellow airman behind. Furthermore, you will complete your mission to the best of your ability, without falter, without fail.

Are you an Airman in the USAF? If so, leave a comment below and let us know what the Airman’s Creed means to you.

Sailor’s Creed for the US Navy

Keanu C.
Keanu is currently an active duty airman in the United States Air Force. Born and raised in Columbia, Maryland, he's currently a Computer Networks and Cyber-security student at the University of Maryland. Keanu enlisted in the US Air Force in September 2013, and attended the Community College Of The Air Force, graduating with an Associates Degree in Transportation.

He currently resides in Tuscon, Arizona, and has plans to attain a Doctorate in Professional Studies In Cybersecurity. 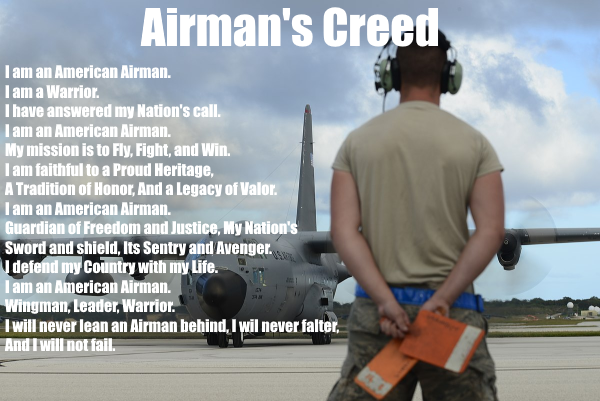