What types of war movies can you find on HBO Max?

HBO has always been renowned for delivering some of the most dramatic and entertaining content.

As a result, you can find more than a fair share of war epics and movies.

“Black Hawk Down” is easily one of the best war movies to come out in the 21st century.

The film is based on the true story of U.S. Army Rangers trapped behind enemy lines during the disastrous engagement in Somalia.

For this reason, audiences get a rare (and pretty accurate) portrayal of what it’s like to serve in special ops (Army Rangers, Delta Force, etc.).

Josh Hartnett stars in “Black Hawk Down” along with stellar performances from Ewan McGregor and Eric Bana.

“Full Metal Jacket” is considered by many quite possibly the best war movie of all-time.

Regardless of your personal opinion, it’s an awful solid (if not dark) film.

“Full Metal Jacket” is also considered one of Stanley Kubrick’s best films which is impressive since he is also beloved for “2001 A Space Odyssey” and “The Shining”.

However, “Full Metal Jacket” stands out as arguably the most realistic movie ever set during the  Vietnam War.

The first and second part of the film almost divide as chapters with various different settings and plots.

Nonetheless, it’s all connected to J.T. “Joker” Davis” and his experiences in ‘Nam.

#3. The Battle of Algiers

“The Battle of Algiers” was an extremely influential film that initially debuted in the late-1960s.

The film dramatizes the Algerian War which took place throughout the 1950s and 60s.

The presentation of the film is very unique and designed to be impartial.

In fact, the film crew even elected to bypass casting professional actors for individuals that actually fought in the conflict.

Moreover, militant groups in the past have used the film to draw inspiration and even prompted a special screening from the Pentagon in 2003.

According to reports, the Pentagon believed that Iraq forces were studying the film to learn about modern counter-terrorism tactics.

For this reason, “The Battle of Algiers” presents a docu-series vibe that seems very authentic.

It’s one of those war movies you just have to see to understand its importance in history.

Steven Spielberg is not only a talented director but also knows how to produce family-friendly entertainment.

As a result, it’s not surprising that “Empire of the Sun” is one of the more kid-friendly movies on the list even if the story is tragic.

“Empire of the Sun” features a very young Christian Bale who portrays a teenage boy (Jamie) from a wealthy British family.

While studying in Shanghai, China is invaded by Japanese forces which completely alters Jamie’s life.

The World War II drama presents a side of the war that is not often covered and is a strong introduction into what the Pacific theater was like.

Accordingly, Jamie isn’t the typical war hero yet audiences root for him with the same enthusiasm.

Christopher Nolan is widely considered one of the best and most innovative directors.

However, his credits were absent of a noteworthy war epic until Nolan decided to adapt “Dunkirk” for the big screen in 2017.

The film was released with massive anticipation considering this was the height of Christopher Nolan glory (think “Batman”, “Inception”).

Notwithstanding, some viewers and critics felt left down by the underwhelming war movie which sometimes drags longer than its 106 minutes of run time.

Be that as it may, “Dunkirk” is still highly regarded among critics and won several Oscars.

Tom Hardy’s performance is brief yet memorable along with the rest of the cast reenacting a crucial moment in WWII history.

In the end, “Dunkirk” is rare for a war movie in that it ends on a sorrow note.

Nevertheless, those knowledgeable about WWII history understand precisely the significance of the conflict.

“Hacksaw Ridge” was major redemption for Mel Gibson in 2016.

The actor and director had previously been entangled in controversy yet found a memorable, heart-warming tale to adapt – and everything changed again.

Gibson won multiple Oscars that year, including a nomination for ‘Best Picture’.

Doss was a Seventh-Day Adventist that elected to join the U.S. Army despite his religions convictions.

The Army medic saved dozens of lives during the Battle of Okinawa without carrying a firearm.

It was the only honorable way to serve the country during WWII, according to Doss, who refused to commit a violent act based on his religious practices.

“Hacksaw Ridge” is a surprise war epic for being about a pacifist.

You’ve likely heard of “M*A*S*H” even if you were not old enough to see the original episodes in the 1970s.

“M*A*S*H” is the type of show that is timeless and remains beloved by many.

The film stars Donald Sutherland and Elliott Gould as they poke fun at the absurdities of war.

The dark comedy was a major breakthrough for director Robert Altman and premiered during the height of the Vietnam War.

There are many Americans that were against the invasion and thus connected with the 1970 war satire.

Hence, the filthy language and flaws of the military personnel didn’t sit well with everyone.

In fact, “M*A*S*H” was the first feature-length, studio picture to feature the F-word.

“M*A*S*H” was so successful that it immediately spurred a spin-off TV series, that was also tremendously popular.

Now, you can enjoy “M*A*S*H” as one of the many war movies available to stream on HBO Max.

“12 Strong” is a modern war movie worth watching on a slow night.

It takes more than 2 hours to get through the story which is sometimes brutal to observe.

The trio star as Green Berets that arrive during the early days of the bloody War in Afghanistan, shortly after the events of 9/11.

“12 Strong” is based on Doug Stanton’s book – “Horse Soldiers” – which opened readers eyes to what was occurring in the Middle East.

Unfortunately, the threat of the Taliban remains active more than a decade after U.S. forces infiltrated Afghanistan.

“The Tuskegee Airmen” is an HBO original film.

Thus, you can only find it on the HBO Max streaming service.

The film originally premiered in 1995 and features an A-list cast.

“The Tuskegee Airmen” made history as the first black pilots in the Army Air Corps.

The pilots overcame racism and were essential in protecting their country during World War II.

It’s an outstanding history lesson that doesn’t get enough attention.

#10. The Life and Death of Colonel Blimp

“The Life and Death of Colonel Blimp” is the type of war movie you can even impress a film snob by knowing.

It was originally released in 1943, which is the primary reason most are unaware of the war epic.

Regardless, it’s a shame, considering that critics have gone as far as to suggest it’s the greatest English film ever made.

The story tracks the personal life and military career of a British Army officer over the course of nearly 4 decades.

Throughout that time period, audiences are introduced to the Boer War in the early 20th century along with the events of WWII.

Consequently, “The Life and Death of Colonel Blimp” observes the complicated lives of many war heroes.

It particularly pertains to the dysfunctional relationship between Brits and Germans during the period.

Lastly, one of the first films shot in color, the production value withstands nearly a century of filmmaking.

“Welcome to Sarajevo” is a must watch for any fan of Woody Harrelson.

The eccentric, 61 year-old actor delivers regardless of what role he accepts, or how diverse of a performance.

As a result, Harrelson is just as good when he portrays a war journalist covering the 90s conflict in Bosnia.

Despite carrying the reputation of an impartial reporter, Harrelson begins to have a change of thoughts after he witnesses the carnage on the front lines.

“Welcome to Sarajevo” is eye-opening yet another important lesson in the history of war.

“Paisan” is another film that will get the attention of movie buffs.

The film was produced in the mid-1940s and therefore features a very throwback quality.

The influential Italian neo-realist film was important for the career of filmmaker Roberto Rossellini.

Roseellini set “Paisan” in Italy near the conclusion of World War II.

It’s an interesting piece of cinema in that the WWII film presents more of the perspective of an Axis power.

The peculiar film is divided into separate episodes with each one developed by a different screenwriter.

The episodes in the film are designed to be just as funny as they are tragic.

If you need any more provocation to give “Paisan” a try – Martin Scorsese claims it’s his favorite movie of all-time.

It was the highest-grossing film upon its release in 1941, and continues to withstand the test of time.

“Sergeant York” is renowned for its patriotic themes that coincided with the attack on Pearl Harbor.

Thus, “Sergeant York” is definitely a unique perspective into how Americans thought and felt shortly before the country entered World War II.

Howard Hawks, one of the legendary directors from Hollywood’s golden age, adapted the film based on a true story.

Gary Cooper received an Academy Award for his performance and the film went on to win ‘Best Picture’.

“Rome, Open City” is another worthwhile blast from the past.

It’s considered one of the top war movies not only for its generation, but all-time.

The fiery and emotional film presents the horrific post-war conditions of the country.

In fact, Italy was so embattled that its iconic film industry (which emerged during the days of Spaghetti Westerns) was basically nonexistent.

For this reason, Rossellini created the film as a demonstration of resistance and persistence.

HBO Max is frequently considered among the best streaming services.

The entertainment provider not only has an extensive catalog but is constantly updating. 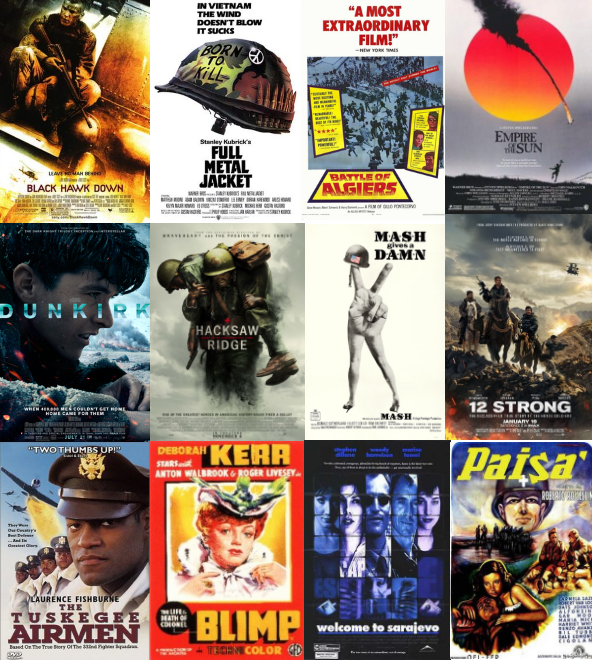 The top war movies on HBO Max include some of the most popular and critically acclaimed of all-time. Discover the 14 Best War Epics.