It is a requirement for most Linguist positions across all branches of Military.

The Military does not release specific details regarding what is on the DLAB, and for this reason you may be unsure of what to expect.

You can expect the DLAB to be difficult, but preparing well for the test will set you up for success.

Continue reading for more information on what the DLAB is, how to take it, how to study and answers to more of your questions.

What is the DLAB?

The Defense Language Aptitude Battery is a test given to individuals to judge their ability on learning a foreign language.

You do not need to know a foreign language to take this test, it is to test your ability to learn a language using audio and written test questions.

The purpose of the test is to ensure those who are wishing to train for certain foreign relations positions, can adequately learn the language for their specific area.

This exam is required for anyone who would like to attend the Defense Language Institute.

The DLAB is made up of over 120 questions divided into audio and visual sections.

Questions on the test range from selecting words that have different sounds and applying basic grammar rules to made-up words.

While you should always aim to get the highest score you can, a minimum score to enter into the Defense Language Institute is 95.

Each language is divided into a category and has a different minimum score based on that category.

The DLAB is proctored by Military personnel and your testing site will be based on the Military branch you have joined.

Testing is available at “Sister Service Testing” locations, but it generally recommended to take the test at a testing facility within your branch.

How do I take the DLAB test?

As discussed in the area above, you can take the DLAB at any Military Testing Site.

The DLAB is conducted in two stages.

The first portion of the test will be an audio test.

During this portion you will hear audio clips through a set of headphones.

Audio clips will play one time and you are required to answer questions related to the sound.

Questions vary and are based on a made-up language.

You will be asked questions surrounding which word sounds different or has different stress points.

During this time you will be given grammar rules that you must use to apply to the audio clip and question.

The second portion is a visual portion.

This portion includes applying words to pictures of items and deducting a sentence from the translated words.

Using the pictures and words you will also match the translated phrase.

You will not use the previously set up grammar rules from the section before, but can depend on using some English grammar rules.

Your score on the DLAB will show your aptitude to learn a foreign language.

To get into the Defense Foreign Language Institute you must receive a minimum score of at least 95, regardless of the branch.

Certain MOS / AFSC / Ratings have minimum requirements that are higher than the 95 score, depending on the complexity of the job, the job functions, and the area/language a person will be working in.

As previously mentioned, each language is placed into a category based on how hard it is for an English-first speaker to learn.

These categories are chosen by the Defense Language Institute, not by a specific branch.

There are four categories, Category I, II, III, and IV.

The category also describes the length of the basic course taught at the Defense Language Institute.

Category I is considered the easiest and has the shortest course, with Category IV being the most complex and the longest course.

There are six languages in Category I including Spanish, Italian, and French.

The minimum DLAB score for Category I language is 95.

The minimum DLAB score for Category II language is 100.

Category III is the largest Category including 28 languages.

A minimum score for Category III languages is 105.

Based on the categories above, having a lower score can really limit you to certain areas.

What is the Defense Language School?

It is one of the oldest language schools in the United States.

Located on Monterey Bay, it was first established in 1770 as the Monterey Presidio by the Spanish Military.

It was seized by America is 1846 and has been used by the Military in varying ways since that time.

The Army’s language school moved to this location in 1946.

Around 20 years later the Defense Language Institute was created.

The size of the school has increased substantially to serve around 2,500 Military members.

Students can graduate with an Associates of Arts Degree or certificate after being trained.

There are multiple schools at this location all of which are ran by a civilian dean.

Military members from all branches, active and reserve, attend this school.

The teachers (over 1,900) mostly consist of individuals who are native speakers in the language that they teach.

Those who are training in an Middle East languages will attend Middle East Schools I, II or III for 64 weeks.

Classes range based on the difficulty of the language and can last anywhere from 26-64 weeks.

The Defense Language School will not only teach individuals to speak, write and hear the language, they will teach them about the culture.

They will learn how to negotiate, how to haggle, how to dress, how to cook the food, listen to music and attend special events.

It is important that students learn not only the language, but how to act and interact in that area.

How to study for the DLAB

There are many websites out there that will provide study materials for the DLAB.

While there is no way to know exactly what you will see on the DLAB there are a few things that you can do to help prepare.

One of the first steps to preparing for the DLAB is to study English Grammar.

During the test you will be asked questions that may play off of English Grammar rules.

Having an understanding of these rules will assist in your ability to make determinations about the questions being asked.

Understanding how the test will be presented will help you know what to look for.

In the section above, How do I take the DLAB, we covered how the test is presented and what types of questions you may be assigned.

Understand that you will be using the rules that they provide and use the process of elimination to apply these rules to the answers available.

Also understand that audio samples will only be provided once, so listen closely.

While the Military does not offer an official DLAB practice test, there are a few sites that do, including dlabprep.com.

There is not a comparison to the real test, because it consists of a made-up language, but taking a practice test will help you become familiar with how questions may be asked and how to listen intently.

It is also important to note that places such as dlabprep.com do not use actual questions, as they are not released to the public, but similar ones based on experience.

Through taking practice tests you may find certain techniques that work better for you.

You may find that you need to keep your eyes closed in order to focus on audio or you need to place a marker to the one that you initially hear a difference on.

What is the highest score you can get on the DLAB?

The highest score you can get on the DLAB is 164.

This was recently lowered and is very hard to get.

Higher scores are generally obtained by those who have previous foreign language training and those who score high on entrance testing.

What percentage of people pass the DLAB?

It is estimated that roughly 50 percent of people “pass” the DLAB.

Pass, meaning receiving the minimum score required to get into Defense Language School of 95.

If you are not scoring high in entrance exams or performing well, you will not be asked to take the DLAB.

Therefore, those who are given the test, are seen as able to pass.

Can civilians take the DLAB?

In order to take the DLAB you must be a member of the Armed Services or sponsored by a government agency.

You must be joining the Military and cannot take it just to see how you might score.

How many times can you take the DLAB?

If you do not get a satisfying score on your initial DLAB test of at least 95 you can take the test again in six months.

The second retest (third time taking the test) can be taken without any additional authorizations after an additional six months.

You are only authorized two retests.

After that you must place a request, and depending on the branch, receive signatures from Commanders or other higher level individuals.

What is considered a good score on the DLAB?

A 95 is considered a passing score on DLAB.

A score of 95 is considered passing because it is the minimum requirement for some basic languages as well as getting into the Defense Language Institute.

While 95 may be considered passing, you want to try to reach the best score you can.

Your score will follow you around through your Military career, as they do not expire.

It can also inhibit you from getting into select career fields because of your inability to meet the language requirement for that area.

A good score will be dependent on the language category you want to study.

Any score above 110 is considered a good score and will set you up for success on being able to pick a language that you want, unless the specific job requirements require a higher score.

A score of 130 will put you above average in comparison to others who are taking the test.

Higher scores also tend to correlate to a lower attrition rate, so they are more likely to accept higher scores into the Defense Language School.

The Defense Language Aptitude Battery (DLAB) is a test required to work in foreign relations, linguist or other similar Military positions.

The test is administered at a Military Testing Site for each specific branch.

It consists of audio and visual sections with a max score of 164.

The minimum score to pass is a 95 but receiving a good score will require you to get at least a 110.

The test is difficult with roughly 50 percent of individuals receiving a qualifying score.

To improve your chances, find practice questions and become familiar with the test procedures. 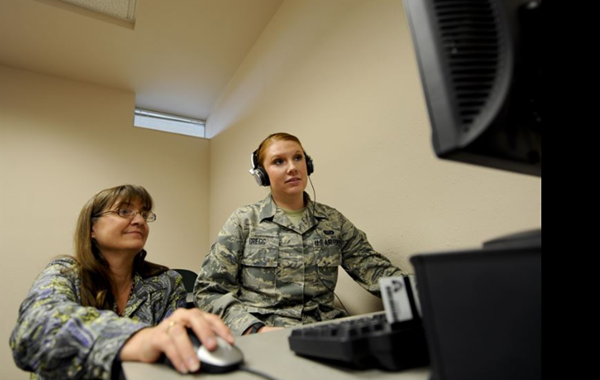 Learn more about the Defense Language Aptitude Battery test, or DLAB. Includes info on how to take the test, how to read your scores, and much more.