If you look closely, you may notice that military uniforms are worn with what appears to be a “backwards” American flag.

This can be confusing for civilians who are used to viewing the American flag with the blue star field, or canton, in the top left corner rather than the top right.

However, there is an important reason why the American flag has a reversed appearance on military uniforms.

Read on to understand the history, significance, and proper representation of the American flag as it is proudly displayed on the uniforms of military personnel.

Why Are Flags Worn Backwards On Military Uniforms?

Though the American flag patch worn on military uniforms may appear to be backwards or reversed, this is not technically the case.

The American flag is worn “backwards” on military uniforms due to the significance of the blue field that honors the nation’s states with stars.

This blue star field must always face towards the front, in the highest position of honor, followed by the flag’s red and white stripes.

The American flag patch is almost always worn on the right shoulder of military uniforms as a symbol of respect and dedication.

Therefore, on the uniform of military personnel, the blue field of stars on the U.S. flag patch must be “reversed” so that its position is in front as troops move forward.

If the flag was not worn “backwards” on the right sleeve of a military uniform, according to protocol, then it would appear as if it were retreating.

When the U.S. flag is displayed on any object that is moving, including a person in uniform, the field of blue must be displayed towards the front of the object.

In this way, the flag represents an image of blowing in the wind with the red and white stripes trailing behind the blue star field.

How To Visualize The Reverse Flag

To help with this visualization, consider that the American flag is always attached to a flagpole on the canton side.

This principle applies to the flag patch in the sense that the right arm of a service member in uniform represents a flagpole.

As the service person moves forward, the canton is in the front and the flag’s stripes “flow” to the back.

The “reverse” flag is also visible on certain vehicles and uniforms worn by personnel in fields outside the military.

For example, many U.S. aircraft and vehicles have the flag painted this way on the right side as they move forward.

In addition, official motorcade cars will also have a backwards U.S. flag attached on the right.

Fire fighters, police officers, and other personnel that represent official or patriotic institutions may also wear a flag patch.

Like the military, they must abide by strict codes in wearing the U.S. flag.

This includes placing the canton at the highest position of honor in the front.

History of the Backwards Flag

The history of the backwards flag can be traced to the American Civil War.

During this conflict, units had standard flag bearers who would carry the flag into battle.

This was a military symbol representing the courage and dedication of those who served and fought.

The flag would stream backward behind the standard bearer with the blue field of stars leading and the red and white stripes following.

These patches served as a way to distinguish them from enemy troops.

This was helpful since paratroopers often landed behind enemy lines and the flag patch allowed fellow service members to recognize them.

The military has also required occasional wearing of the reverse flag during joint-duty or international deployments to differentiate American troops.

However, the backwards flag was not a compulsory part of the military uniform until around 2003.

In that year, Army Regulation 670-1 stated that the U.S. flag patch must be worn with the stars facing forward on uniforms.

This became known as “assaulting forward.”

By 2005, Chapter 1, Title 4 of the U.S. Code made the flag a compulsory part of military uniforms, including:

Can Civilians Wear The Flag Backwards?

Civilians can wear the American flag backwards if done correctly, respectfully, and as a patriotic gesture.

All rules of etiquette and propriety should be followed when wearing or displaying the American flag.

This is intended as a sign of respect for its symbolic nature and those who have fought to protect it.

There is a U.S. Flag Code which is a law that defines and determines the proper use and treatment of the American flag.

This code includes a specific section addressing respect for this national symbol.

The law states that displaying or wearing the U.S. flag is considered disrespectful, not appropriate, and even prohibited in the following situations:

The flag code does allow for American flag patches on uniforms as part of the military, police, fire fighters, and other organizations of a patriotic nature.

Any desecration of the American flag, in any form, is considered disrespectful.

It may also be a potential violation of the U.S. Flag Code.

In general, if civilians wish to wear an American flag patch, it should be placed properly.

This means at the top of the upper sleeve or above the left breast on clothing.

Above all, the American flag should be treated with respect in all manners and at all times.

When it comes to uniforms in the U.S. military, there are special patches, medals, and insignia that are worn to represent service and unit identity.

These emblems also symbolize the pride and self-sacrifice associated with serving in the Armed Forces.

There are strict rules that govern the wearing and presentation of military uniforms.

This includes the directional facing of the American flag.

The U.S. flag appears backward on military uniforms, when worn on the right side, so the canton is assaulting forward.

This reflects the image of the American flag flying in the wind, the blue union field always moving forward to symbolize the bravery and commitment of military service members. 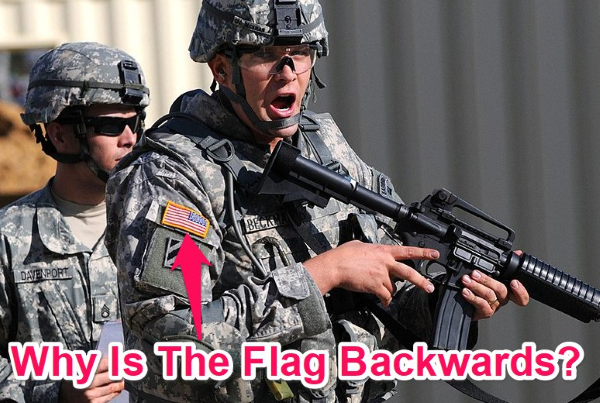 Find out why the American flag is worn backwards on US Military uniforms, including the history behind it, whether or not civilians can do it, and more.