The F-22 and F-35 are both multi-role fighters that have revolutionized the power of aircraft design and technology.

The F-22 is the epitome of air dominance and unparalleled in its design and capabilities.

Though also a formidable aircraft, the primary purpose of the F-35 is to update and replace aging models of fighter planes to ensure a strong and mission-ready fleet.

Though these aircraft share similarities, here are the top 10 differences between the F-22 and F-35.

The Air Force’s newest fighter aircraft is the F-22 Raptor.

This fighter aircraft is unmatched by any existing or projected aircraft models.

It performs air-to-air and air-to-ground missions, and fully realizes the operational concepts that are essential for modern war-fighting capabilities.

These unparalleled capabilities include:

The F-22 is designed for air dominance and rapid response, to cover massive distances and defeat threats that attempt to deny access to or impair U.S. Armed Forces.

In addition, the F-22 is an integral part of the Global Strike Task Force.

The F-35A is the U.S. Air Force’s recent fifth-generation fighter.

Its mission, like the F-22, is also to reduce vulnerability for U.S. and allied nations’ forces.

However, since the Air Force’s fleet of F-16 and A-10 aircraft have aged, the F-35A will replace these models as the primary fighter aircraft.

Its enhanced capabilities include:

As the F-35A is implemented, it will provide a stronger operational force in response to any advanced threat environment or conditions.

It also has supercruise capability due to the combination of its aerodynamic design and increased thrust.

Supercruise refers to the way the F-22 can cruise at supersonic airspeeds (greater than 1.5 Mach) without using afterburner.

The F-22’s ability for supercruise expands its capacity for speed and range over current fighter aircraft that use fuel-consuming afterburner to operate at supersonic speed.

The F-35 engine consists of:

However, its range is unlimited with aerial refueling.

The characteristics of both the F-35 and F-22 demonstrate the powerful strength and force of these aircraft as well as their advanced designs.

The maximum takeoff weight for the F-35 is 70,000 pound class and its internal fuel capacity is approximately 18,500 pounds.

The F-22, by comparison, is longer and taller than the F-35 and has a greater wingspan.

In addition, for air-to-air loadout, the F-22 armament can include:

The payload, or carrying capacity, of the F-22 is the same as air-to-air or air-to-ground armament loadouts.

This payload is with or without the two external wing fuel tanks.

F-35 aircraft have internal and external armament capabilities, and can carry a variety of weapons.

The munitions carried by F-35s vary and are based on mission requirements.

The backgrounds of the F-22 and F-35 aircraft reflect advancements in technology as well as cutting-edge aerodynamic design and performance.

After testing the YF-22 and YF-23 prototypes of the Advanced Tactical Fighter in 1990, the YF-22 was considered the best of the two and selected for development.

In 1991, engineering and manufacturing efforts began.

Lockheed/Boeing received the contract for developing the airframe.

Pratt & Whitney received the contract for developing the engines.

The aircraft went through extensive testing at the subsystem, system, and flight levels beginning in 1997.

In 2001, approval was given to enter low-rate initial production.

Operational and test evaluation by the Air Force Operational Test and Evaluation Center was completed in 2004, with approval for full-rate production in 2005.

Though the aircraft was designated as the F/A-22 briefly, it was renamed the F-22A in December 2005.

The F-35 aircraft’s background began as a design to replace the inventory of aging fighters within the U.S. Air Force, Navy, and Marine Corps.

Therefore, the multi-role F-35 fighter is intended to solve the problem of an aging fleet of tactical aircraft.

This is beneficial in that the F-35 features stealth and other cutting-edge technologies, making it an advanced fighter aircraft.

In late 2001, the decision was announced to proceed with the Joint Strike Fighter (JSF) program.

This brought the program to the System Development and Demonstration (SDD) phase.

Lockheed Martin was teamed with Northrop Grumman and BAE to develop and produce JSF aircraft.

The goal of the SDD phase of the program was to:

The backgrounds of both the F-22 and F-35 include vast developmental and research processes as well as rigorous and extensive testing and evaluation methods.

The aero-design of the F-22 aircraft is so sophisticated that it can out-maneuver all existing and projected aircraft.

Its superior maneuverability is a result of its design as well as the following features:

The F-22’s design was aerodynamically refined and rigorously tested during development for unprecedented maneuverability.

Though the F-35A is not at the level of maneuverability as the F-22, this aircraft is also agile and versatile.

The F-35A features conventional takeoff and landing, allowing it to fulfill multiple roles as a fighter aircraft at any time and location.

Its high-performance maneuverability is also enhanced by its superior capacity for situational awareness on the part of the pilot.

Lockheed Martin and Boeing are the contractors for the F-22 aircraft.

Lockheed Martin is also the contractor for the F-35 aircraft.

However, the F-35B and F-35C variants will be more expensive and closer to $100 million for unit cost.

Both the F-22 and F-35 feature advantages that allow these aircraft to be dominant forces of the U.S. military and mission success.

Here are just some of the combined advantages of the F-22 that elevate its lethality against all advanced air threats:

F-22 pilots can track, identify, shoot, and kill air-to-air threats before detection due to the aircraft’s sophisticated sensor system.

These advantages minimize the ability of enemy forces to track and/or engage the F-22 and support its unsurpassed tactical capabilities for first-kill opportunities against threats.

The F-35 possesses advantages that make it a leader in defense and as a current and future fighting force.

The F-35 also has the advantage of secure data sharing and common communication capabilities with allied forces for coalition interoperability and mission success.

This is due to the aircraft’s cutting-edge tactical data links and advanced logistics support.

The capabilities of both the F-22 and F-35 in combat and defense roles are unprecedented.

The F-22 is unmatched in survivability and lethality against air-to-air and surface-to-air threats.

This is largely due to advanced stealth technology, allowing the F-22 to protect itself as well as other assets.

The F-22 aircraft has significant capabilities in attacking air and surface targets.

It’s also expected that the F-22 capabilities will be upgraded in the future for even more prowess in combat and defense roles.

The F-35 is considered indispensable in its combat and defense roles.

Therefore, F-35 operators hold an advantage over adversaries unlike any other previous fighter.

This is enhanced as well by the aircraft’s processing power, design, sensors, and flexible communication links.

The internal mounting of the Electro-Optical Targeting System in the F-35 allows for extended range detection of air-to-air and ground threats in addition to precise ground targeting.

Perhaps the most significant combat and defense roles of the F-35 are represented by its international cooperative use and Coalition partner security.

Therefore, the F-35 reduces costly and redundant research and development while improving access to technology among strategic international partnerships.

It’s estimated that two-thirds of the life cycle cost of an aircraft is made up of logistics support.

Therefore, high levels of reliability and maintainability are essential for both the F-35 and F-22 aircraft.

The F-22 and F-35 are designed to have superior reliability and maintainability compared to any other fighter aircraft in history.

They require far less manpower to fix any issues in addition to operating more efficiently.

This system manages and integrates the aircraft’s operational performance with scheduled upgrades, maintenance, prognostics, and service support, among other monitoring and performance parameters.

F/A-22 Raptor Heads Out To The Nellis Training Range 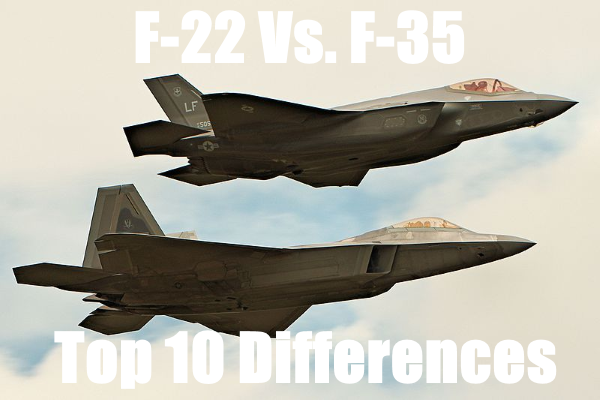 The F-22 Raptor and F-35 Lightning II are 2 of the countries newest fighter jets. Learn more about the similarities and differences of each.