These departments fall under the Department of Defense and have different responsibilities when it comes to protecting the United States.

If you are considering joining the military and have narrowed your decision down to the Navy or the Air Force, you may be wondering what the difference is.

Below we will discuss what the Navy is, what the Air Force is, details about them both and 5 key differences between them.

Continue reading for more on Navy vs. Air Force.

What is the US Navy?
What is the Air Force?
Navy vs. Air Force: 5 Key Differences
Conclusion

What is the US Navy?

The US Navy is a Department of Defense Military Branch that serves its main duties on the sea.

The Navy has ships, aircraft, and submarines that allow for an advantage in warfare.

It is one of the largest naval forces in the world with its surprisingly capable sea and air abilities.

Of those 293 deployable ships, 89 are currently deployed, including submarines.

The Navy has multiple aircraft carriers in the Atlantic, Pacific, 5th Fleet, and 6th Fleet.

They also have an Amphibious Assault Ship currently underway.

The US Navy is a multiple force threat that has the ability to mobilize at a moment’s notice.

How big is the Navy?

The US Navy currently has 336,706 active duty personnel.

The US Navy also has 103,675 individuals in the Ready Reserve.

What does the Navy do?

The US Navy has the capability to support battles in the sea, in the air, and on the ground.

They have one of the largest naval fleets allowing them to detect, neutralize, and attack threats.

Their capabilities include air strikes with their multiple aircraft carriers and large air force.

Navy personnel are also trained on ground equipment and vehicles to support ground operations when needed.

The Navy is responsible for protecting the US soil at ports and on the sea.

Naval ships patrol international waters to protect the US.

Having the capability of a naval presence allows for an existing fighting force in the event the main-land is attacked and under siege.

The Navy is one component of the Department of the Navy, (the Marine Corps is the other component).

It has one of the more complex command structures out of all of the US armed forces.

The Navy is broken into a dual command structure including an administrative structure and an operational structure.

The purpose of this is to alleviate operational commanders from administrative functions that might inhibit their ability to fully focus on commanding combat forces.

The administrative organization is responsible for training, research, maintenance, personnel, and supply chain.

The types of commands include:

There are six fleets in the Navy that are divided into task forces, task groups, task units, and then task elements.

The Navy also has squadrons for aviation units and Naval Construction Battalions (SeaBees).

Related Article – Pros and Cons Of Joining The Navy

What is the Air Force?

The US Air Force is a Department of Defense Military branch that primarily focuses on air, space, and cyberspace battles.

The Air Force was established in 1947 with the National Security Act of 1947 and Executive Order 9877.

The US Air Force is responsible for creating a superior air and space enforcement.

It is comprised of active, reserve, and guard units.

How big is the Air Force?

These demographics do not include Guard, Reserve, or Academy members.

There are 69,200 individuals in the Air Force Reserves.

What does the Air Force do?

They use intelligence, surveillance, and reconnaissance (ISR) to patrol and protect.

The use of multiple aircraft provides the ability to counter land and air strikes as well as deliver global strikes and rapid mobility.

This provides support and protection for ground troops below.

The USAF also has space operations that allow for missile warning, GPS, Space Situational Awareness, and to protect communications.

The main responsibilities of the Air Force include defending and fighting in air, space, and cyberspace.

Air Force members work both in the air and on the ground.

The USAF is responsible for being available for air strikes whenever necessary and being vigilant on protecting against air strikes or cyber attacks.

They ensure communication is secure and GPS are working properly.

Under the President and Secretary of Defense, the Air Force has the Military Departments and Unified Commands.

Under commands, the structure follows similar to other branches of the Military.

Probably the most recognizable difference between the Navy and the Air Force is their responsibilities.

The Navy is responsible for protecting ports and the sea.

It consists of deployable ships and other water vessels.

Their force is made of mostly aircraft.

Both the Navy and Air Force will have ground positions on soil, but their main responsibilities are elsewhere.

They will both have positions that are in fields such as medic and policing and both have aircraft pilots.

But even with similar career fields, the responsibilities of those specific individuals are different.

The Air Force is known for its medical evacuation by aircraft.

While the Navy has positions in naval cyber warfare, protecting cyberspace is one of the key responsibilities given to the Air Force.

Even though their responsibilities differ, they will work together when needed.

Another difference between the Air Force and the Navy is their command structure.

The active duty components of each branch fall under Title 10 of the US Code, but that may be all that is similar between their command structures.

The Air Force has a command structure that is similar to that of the Army.

Individuals in the Air Force fall under different commands, depending on their specific job.

They are organized using squadrons that are based on job function.

The Navy’s command is broken into two different functions: operational and administrative.

Navy members can actually fall under both commands simultaneously.

Operational commands consist of combatant commands that have primary duties of operations and exercises.

Administrative commands consist of commands that have the primary duty of all administrative functions such as training, repairs, and medical.

The Air Force commands all fall under the same structure, while the Navy breaks it into two separate commanding units to allow operational commands to focus on operation duties without the distraction of administrative functions.

Despite the Navy having the main responsibility of protecting the US at sea, they also have fighter pilots.

The training to become a fighter pilot in the Navy is shorter than training in the Air Force.

A large difference in fighter pilot training is that Navy members must become skilled in landing and taking off from an aircraft carrier.

Both the Air Force and the Navy follow the Congress recommendations for how many enlisted personnel can be on active duty and how many can be serving above an E-4.

For the Air Force, E-5 and above positions are competitive, and individuals must apply to open positions.

This means that an individual must take a position where someone has retired, been promoted, left for other reasons, or new positions have been allotted.

The Navy has also opened E-4 positions as competitive positions that must be applied for.

Lower promotions generally occur automatically based on time in service or time in rate, while higher ones will include a minimum time requirement in addition to testing requirements.

Additionally, the Navy does not have ranks, they are referred to as rates.

A pay grade and occupational specialty will determine an enlisted member’s rate.

An important difference in the promotional process is the ability for Air Force members to enlist at higher ranks if they agree to a longer enlistment.

This is something that is not offered in the Navy.

Another difference between the Navy and the Air Force is their National Guard and Reserve components.

Air National Guard has 54 organizations between states, territories, and the District of Columbia.

The Navy does not have an official National Guard component.

Both the Navy and the Air Force have reserve components.

There are several differences between the reserve components including size, base locations, and specific jobs.

While USAF basic training is slightly longer than Navy boot camp, the swimming requirements for the Navy means many recruits find it more challenging.

Does the Air Force pay more than the Navy?

Pay in the all branches of the U.S. military is based on rank and time in service. However, USAF enlisted members can sometimes enlist at a higher rank if they sign up for a longer enlistment period.

What is the difference in deployment policies for the Navy vs. the Air Force?

Navy personnel are all assigned a sea/shore rotation, which means a portion of their duty will be at sea, often for 8 to 12 months. The USAF has less stringent deployment policies.

Which branch of the service is better for a tech career, the Navy or the Air Force?

While the Navy offers training and placement in many tech positions, the USAF has key responsibility for military cyber security.

Do both the Navy and the Air Force have a National Guard?

The USAF has both a National Guard and a Reserve component. The Navy only offers the Navy Reserves.

It can be difficult to make a decision between the Navy vs. Air Force.

The Navy mainly supports operations in the sea but has a large air component as well.

The Air Force is responsible for protecting the United States through air operations, cyberspace, and space.

Above, we discussed what each branch does, what their responsibilities are, their size and their command structure.

Just as important, is the differences between the two branches.

Understanding what each branch does and what their differences may be will help make an informed decision on your future.

Status of the Navy

About the Air Force 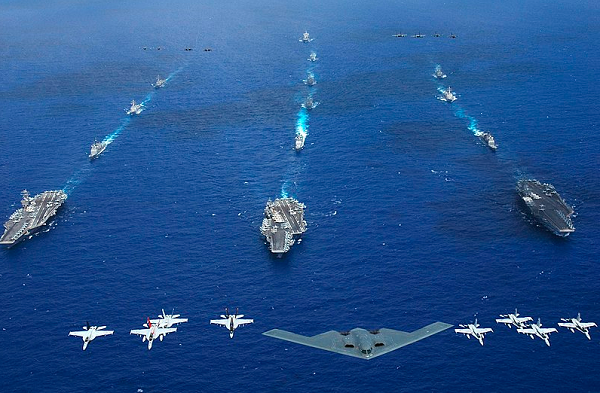 Learn more about the differences and similarities between the Navy and Air Force, including their official mission, responsibilities, command structure, and more.