There are several military installations in Texas.

It’s not shocking considering the state is the second-largest in terms of land area as well as population.

For this reason, military families represent a significant portion of the population in the Lone Star State.

Are you considering Corpus Christi, Houston, San Antonio, El Paso, or Austin because of a new assignment?

Get Texas BAH rates for every major military base and installation in the state along with nearby big cities.

Corpus Christi is an underrated coastal city in Texas.

Corpus Christi is the ideal destination for military families stationed at the following locations:

Learn more about the military bases in Texas.

Military housing is available directly on base in addition to surrounding communities.

Fort Hood is adequately situated halfway between Austin and Waco for families.

The military installation is the most populous in the world with a reported 53,416 members (2010 Census).

The Basic Allowance Housing (BAH) rate is determined based on location, military rank, and dependents (if applicable):

Houston is the most populous city in Texas and one of the highest in the country.

Houston has an extraordinary reputation in terms of culture, medicine, and research.

Additionally, military families will appreciate the ample options for housing even if the market is competitive.

Do you want to call Houston home? Explore Texas BAH rates for the city:

Austin is another booming metropolis in Texas (especially for more progressive-minded families).

The diverse, eccentric culture is driven by an arts scene that has contributed to its reputation as “The Live Music Capital of the World”.

Army Futures Command is noteworthy in that the relatively new military creation is focused on future readiness.

Texas BAH rates for Austin, TX are as follows:

BAH For Dallas / Fort Worth / Texarkana

The Dallas/Fort Worth metroplex features 2 military installations in the region:

The Naval Air Station Joint Reserve Base is located in Fort Worth.

Service members can find housing in both the metropolis and rural Texas.

Texas BAH is intended to cover most of your housing expenses for Fort Worth:

San Antonio is another underrated city in Texas.

Those that are fortunate enough to get stationed at Joint Base San Antonio will appreciate the unique culture of this destination.

There are several other military installations in the region:

San Antonio is rapidly growing as it surpassed Dallas recently as the 2nd most populous city in Texas.

Nonetheless, San Antonio is notoriously friendly to the military and does its best to accommodate new arrivals.

Texas BAH rates for San Antonio, TX are as follows:

The city straddles the Rio Grande which separates the United States from Mexico.

El Paso is known for featuring a strong military presence due to several military installments:

Fort Bliss is one of the largest military bases in the country with a massive private training space expanding into adjacent New Mexico.

El Paso has reasonable housing compared to other cities in Texas:

Abilene, TX, presents more of a rural vibe compared to other metropolises that are near military bases in Texas.

Abilene is conveniently located off Interstate 20 providing reasonable access to Fort Worth (150 miles).

In terms of the military, affordable housing is available for service members stationed at Dyess Air Force Base:

Goodfellow Air Force Base is another military installation situated in rural West Texas.

The military base is “nonflying” despite being connected to the U.S. Air Force.

Instead, Goodfellow AFB is utilized for cryptologic and intelligence training as well as firefighting training.

Goodfellow AFB is part of the military-friendly community of San Angelo, Texas.

Texas BAH rates are reasonable compared to other places in the state:

Learn more about the training operations conducted at Goodfellow AFB.

Laughlin Air Force Base falls off the radar in quiet Del Rio, Texas.

San Antonio is within a reasonable drive (150 miles to the west).

Laughlin AFB is the largest pilot training base the military branch operates in the United States.

Thus, it witnesses a high volume of takeoffs and landings on a daily basis.

Military families should consider housing directly on the base or in Del Rio, TX:

Sheppard Air Force Base is situated near Wichita Falls, Texas.

Accordingly, it represents the only multi-national staff and pilot chartered training program in the world. 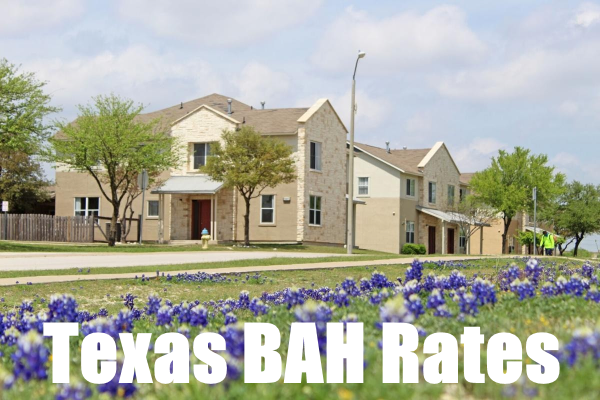