Those who serve in the military wear uniforms, and the uniforms serve a purpose. It just so happens some of the best military uniforms also look sharp and people notice.

Soldiers wear uniforms so they can recognize one another during a mission.

Also, uniforms tend to offer camouflage and protection, as well.

However, some uniforms stand out more than others.

While the title best military uniform might be a stretch for the Spanish Foreign Legion’s dress uniform, we cannot talk about uniforms in the world without discussing what is happening here.

The Spanish Foreign Legion spent time in North Africa during a rebellion, and there other military campaigns followed.

Also, these uniforms have not changed a whole lot over the decades.

The simple dress style includes a parade uniform with open lapels as well as hats with piping and tassels.

The Argentinian Mounted Grenadiers formed in 1812, but it disbanded less than 15 years later.

Then, the second Regiment of Mounted Grenadiers came into being in the early 1900s.

Typically, this is a ceremonial regiment and a Presidential Honor Guard.

The uniforms include a white belt with a matching strap that crosses the front of the body.

Also, there are buttons on the bottoms of the sleeves as well as bordering the front of the uniform’s top.

The hats are also impressive. They are tall, which is common with military uniforms.

Tall hats are meant to inspire fear by being intimidating. While that is unlikely to work in battle today, it was common a couple of hundred years ago.

Overall, the Argentinian Mounted Grenadiers have one of the best military uniforms in the world.

The Royal Regiment of Scotland’s ceremonial dress uniform pulls out all the stops.

Wearing a kilt itself is next level, and the kilt in Scotland has strong historical meaning.

The kilt is symbolic of patriotism.

Also, the uniform also features a sporran, which is a pouch that hangs at the front of the kilt.

The sporran, which is known as the Piper’s Sporran, uses white and black horsehair.

Furthermore, each battalion of the Royal Regiment of Scotland has a different color hackle, which is a hat.

Although the hackles are incomplete without Blackcock feathers.

However, band members in the Royal Regiment of Scotland wear large plumed hats.

When you put together all these unusual items, you are left with one of the best military uniforms in the world.

The United States Navy might not win any awards for their regular uniform.

However, the Navy brought back an updated version of the dress whites.

The new fit is a little leaner than the white uniform of the past.

However, there are side zippers for the top to ensure both the fit and the ability to get out of the dress top.

Plus, blue piping offsets the crisp white for a more updated look.

The Navy dress white uniform includes the dixie cup hat for those E6 and below and the classic neckerchief.

The Navy dress white uniform might be simple, but it looks sharp.

Number one on the list of best military uniforms is the Marine Corps dress blues.

Also, Marines wear a white belt with the dress coat.

The pants are blue with red trim, and the shoes are black.

There is a ton of history wrapped up in the Marine dress blues.

Also, the stiff and upright collars remind soldiers to keep their heads high.

Furthermore, the Marine dress blue Class A uniform is thought to be the most recognizable of all the best military uniforms.

There are several options for the best military uniform globally, but the United States Marines are a clear winner.

There is a lot of history wrapped up in the Marines dress blues, and between the traditions and how it fits, it stands out as the clear winner. 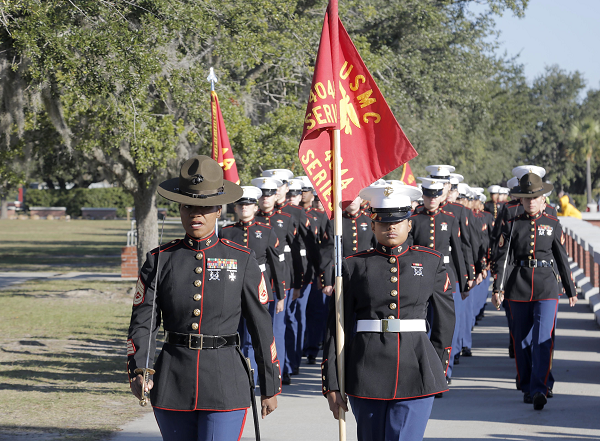 Wondering who has the coolest military dress uniforms? Check out our list of the top 5 military uniforms in the world, including the US Marines, Spanish Foreign Legion, and more.