The different branches of the military all have their own individual uniform types and regulations that they expect their members to strictly adhere to.

The Army is no exception.

They have some of the most strict and time-honored uniform regulations of any branch of the service.

Currently, the Army is the only branch of the service that does not have three uniforms but that’s about to change.

At the current time, there is only a combat uniform and a service uniform that leans more towards being a dress uniform.

So no matter what job a soldier is doing, they always wear their combat uniform a majority of the time.

That will change when the Army Greens uniform has been fully integrated into the uniform system.

Then those in office-like environments and non-field positions will wear the Army Greens instead of the more traditional combat uniform.

Starting in 2020, most new Army members will then be issued all 3 main uniforms.

The Army uniform selection will then consist of the new Army Greens, the Army Dress Uniform (formerly known as the service uniform), and the Army Combat Uniform.

This has long served as the daily uniform no matter what type of job a US Soldier performed on a regular basis.

That will not change much for most Army members even with the addition of the new Army greens.

Most Army soldiers will wear the traditional patrol cap.

Insignia must be worn front and centered and the name in the middle of the back.

Some Army specialties are allowed to wear special headgear with the combat uniform.

Those who wear berets must center the logo over the left eye and wear the excess material to the right side of the face.

They must be buttoned or zipped all the way up to the top of the chest with only a very slight portion of the undershirt showing.

The Army has a drawing demonstrating how a cold-weather coat / field jacket should look, see below:

Each color camouflage uniform has a designated undershirt color to be worn with it.

Even though it’s actually more of a greenish/light brown color in appearance.

For the newer tan camouflaged uniforms, the designated t-shirt color is called sand.

This is a very light-colored tannish t-shirt.

All Army Soldier’s combat uniform pants must match the color of the jacket or outer shirt.

The pants are required to be tucked into the boots or bloused.

The belt is very similar to the t-shirts in that it must coincide with the color of the camouflage being worn.

Only one electronic device is allowed to be worn on the belt or a belt loop.

All army members are required to wear several removable insignias on their combat uniforms.

This includes the American flag (not worn when deployed), rank, current unit, and other approved insignias.

Each Army member must be careful to never mix sewn-on badges with pin-on badges.

There are separate places on the jacket for each.

Related Article – 3 Steps For Visiting An Army Recruiter Near You

This is the newest uniform for the Army which is not expected to be fully phased in until the year 2028.

As was mentioned, it will become the new Army service uniform that will be worn in most non-field and non-deployed environments.

It is designed based on the popular Army uniforms from the World War II era.

They are currently scheduled to be released as follows:

Available for purchase through Army and Air Force Exchange Service

Issued to Soldiers upon completion of Advanced Individual Training

Details on the regulations that will be adhered to with the new Army Greens have not been fully established yet.

The uniforms will be custom measured and shipped to new military members after they have reported to their first duty assignment.

This will be a folding garrison cap very similar to that which the Air Force, Navy, and Marines currently use on their service uniforms.

The ‘Marshall’ bomber style jacket will be one of three jacket options that are currently being explored for use with the Army Greens uniform.

All of the jackets will be darkish green/brown in nature (called heritage green).

The more common ‘Ike’ jacket prototype will be a belted style jacket.

Related Article – Platoon Size – How The US Army Is Organized

The shirts will be lighter in tone than the jacket.

A soldier must have every button, including the neck button fastened.

The undershirt will not be seen if the uniform is worn correctly so the color should not be an issue.

The pants will be lighter in tone and match the color of the shirt.

Brown leather shoes are required to be worn with this uniform.

Special Forces and ranger troops will be allowed to wear brown jump boots with the Army Greens uniform.

Both men and women will be required to wear ties or a similar neck decoration with the Army Greens.

With the addition of the new Army Greens, this uniform will now morph into a more traditional Army dress uniform.

It will only be worn for more formal military occasions after that.

The preferred cap will be a beret that signifies the soldier’s particular job and will be plain in nature for those soldiers that have no specific beret assigned to their Army job specialty.

The berets must be worn so the center of the logo is directly over the left eye and wear the excess beret material to the right side of the face.

The jacket will be one of two colors.

A dark blue version is worn by general officers.

All other officers and enlisted personnel will wear a version that is a slightly lighter blue color in nature.

Only pinned on named tags, insignia, badges, and medals will be worn on the jacket.

The shirt worn under the jacket will be a white button-down dress shirt.

It must have every button, including the neck button fastened.

This shirt is very similar in nature to the dress shirt a businessman will wear under a suit.

The undershirt will not be seen if the uniform is worn correctly so the t-shirt color should not be an issue.

The pants will match the jacket and the color will be along the same lines.

The darker blue version is worn by general officers

All other officers and enlisted personnel will wear slightly lighter blue color pants.

Black leather shoes are the footwear that most will wear with the Army Dress Uniform.

Only black belts are allowed to be worn with this uniform.

Here is something that many soldiers don’t realize.

Army personnel can wear their service uniform even after they have been discharged.

This can be done up to 90 days after a soldier has left the Army.

Of course, the uniform must be worn in accordance with the same strict standards that it was worn before the soldier was discharged.

This rule was said to be made so those that have proudly served their country in the Army can celebrate homecomings and other significant events in the military member’s life shortly after their discharge.

President Trump was not a big fan of the new Army Greens but he helped push their approval through anyway.

He generally liked the style but stated they were too costly in nature.

President Trump especially liked the bomber jacket and the addition of the outer belt to the new uniform.

What uniform does the US Army wear?

Currently, the US Army has a combat uniform and a more-formal service uniform. Starting in 2020, the Army Greens will be phased in to bridge the gap for those in non-field positions.

What Army regulation covers the wear and appearance of the military uniform?

Army Regulation 670-1 dictates the proper wear and appearance of the uniform and insignia for active and reserve personnel. It also dictates the wear of the Army uniform by former service members. Learn more about Regulation AR 670-1 compliance here.

Do you have to pay for your uniforms in Basic Training?

The Army issues all your required uniform items in Basic Training. Thereafter, you will receive a stipend to replace uniform items from AAFES, or the Army Air Force Exchange Service. Learn more about what you’ll need to bring to Army basic training here.

Can I wear my old Army uniform?

Retirees and honorably discharged war veterans may wear service or dress uniforms at formal events and patriotic ceremonies. The combat uniform, however, is prohibited.

Can I wear jewelry with my Army uniform?

Jewelry permitted with uniforms is regulated for safety and conservative appearance. Soldiers may wear a watch, an ID bracelet, and a total of two rings. Females are permitted to wear earrings in dress and service uniforms. Learn more about this here.

The Army and other branches of the service are constantly trying to improve the quality of the camouflage in the uniforms that they offer to their soldiers.

The green service uniform is a nice addition to be used in environments that require a more business dress code than the everyday combat uniform. The service uniform will be reserved for formal events only.

Whichever uniform is required to be worn for the day will surely be worn with pride and distinction. 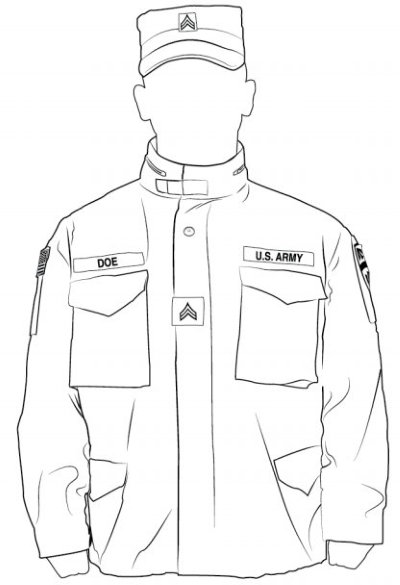 Learn more about the US Army uniform regulations for 2021, including the standards for combat, greens, and dress blues.