The Marine Corps (USMC) – like most branches – is best known for its foot soldiers.

Nonetheless, there are several other worthwhile professions to consider if you plan to enlist in the Marines.

For example, a Marine Corps Police Officer plays an important role in the branch even if it’s not as glamorous as combat.

There are many reasons why you should consider the military profession, including the opportunities it creates after your service agreement concludes in the USMC.

Learn more about what it takes to become a Marine Corps Police Officer, including entry requirements and training expectations.

It is different from USMC Military Police (MOS 5811) that assist Police Officers (MOS 5803).

Military Police (MOS 5811) lack the authority and responsibilities of Officers (MOS 5803), even if they share many of the same duties.

In general, Marine Police Officers (MOS 5803) are supervisors and coordinators.

They are responsible for not only administering military law, but also managing the Military Police (MP) under their guidance.

For this reason, Marine Police Officers do have a lot of interaction with the people they are charged with managing – USMC Military Police (MP) personnel.

The biggest difference between MOS 5803 is that only officers can serve in the position compared to MOS 5811, which is open to enlisted members.

In turn, Marine Corps Police Officers are responsible for supervising not only the enlisted Military Police (MP) but other law enforcement agencies under the USMC too.

Those that qualify and elect to become Military Police Officers (MOS 5811) transform into capable law enforcement officials with jurisdiction over military installations.

USMC Police Officers are responsible for the security and safety of the military installation, including daily admissions onto the base.

They oversee Military Police that guard entrance, patrol in vehicles and on foot, as well as monitor security footage.

There are basic and advanced requirements for each primary Military Occupational Specialty (MOS) in the United States Marine Corps.

These are the basic requirements for Marine Corps MOS 5803, Police Officer:

Secret security clearance is granted by the Department of Defense (DoD).

The investigation is extensive and looks into your personal conduct and background.

In the end, it is nearly impossible to serve in Marine Corps Military Police (MP) with skeletons in the closet.

Thus, make sure you qualify for the USMC MOS 5803 and discuss any concerns with a local Marine Corps recruiter beforehand.

Its purpose is to provide highly qualified civilian and military police to ensure the security of the Marine Corps and U.S. installations across the globe.

The police academy trains personnel for both the enlisted Military Police (MP) along with Officers.

You can only become MOS 5803 by becoming commissioned as a U.S. Marine Corps Officer.

Thus, you have 3 different methods to obtain commissioning:

The Marine Officer Training Program – The Basic School (TBS) is the first destination on the training path.

Next, recruits progress to the Basic Police Officers Course (BPOC).

The instruction consists of classroom and hands-on learning.

Moreover, recruits get to learn and practice police patrol, response to calls for service, and traffic management.

The Military Police Basic Officers Course provides an introduction to the duties and responsibilities of MOS 5803.

Recruits get the chance to learn about anti-terrorism and force protection, policing, communications, and law.

In addition, recruits may specialize in other areas of law enforcement, including:

Learn more about the Marine Corps Police Academy and the Basic Officer’s Course.

What Happens After Training?

In general, most Marine Police Officers advance to their first assignment following the competition of the Military Police Basic Officers Course.

The most common role is to provide security and law enforcement for a military installation, as well as deploy manpower.

Marine Police Officers (MOS 5803) have the primary responsibility of securing the base and keeping the surrounding area safe.

They also must enforce the laws of the land including military law.

These first responders can also deliver first aid or other basic medical assistance in the event of an emergency.

They are usually equipped and trained to work alongside military working dogs (MWD).

While it may not sound like the most exciting profession while serving the military, the civilian career opportunities are outstanding.

There is little surprise that civilian law enforcement is in high demand.

Thus, employment exists at the federal, state, or local level.

Former USMC Police Officers usually have their pick as your destiny is whatever you prefer to make it.

Some prefer to work for a larger law enforcement division at the federal level, including the FBI and CIA.

Meanwhile, others prefer to leave the military and operate in a less hostile region like for a state or local municipality.

Regardless, Marine Corps Police Officers (MOS 5803) do not have trouble securing civilian employment, unlike some Military Occupational Specialties.

Furthermore, since MOS 5803 only consists of officers, you can anticipate an even stronger likelihood of placement.

However, some officers elect to leave law enforcement altogether and have success finding employment in other management positions.

The United States Marine Corps features its own division of law enforcement.

The USMC Military Police (MP) is open to enlisted personnel and officers.

However, only officers can achieve the position of MOS 5803 – Police Officer.

The Marine Corps Military Police Officer role is largely based on organization, personnel management, and supervision.

Police Officers have the primary responsibility of keeping the military installation (and surrounding area) safe, along with secondary duties.

Recruits receive all the skills and training they need at the Military Police Academy in Missouri.

Those that are selected to join as Marine Corps Police Officers (MOS 5803) appreciate a bright outlook for future civilian employment.

As a result, most Marine Corps Police Officers advance to careers at the federal, state, and local level following their time in service. 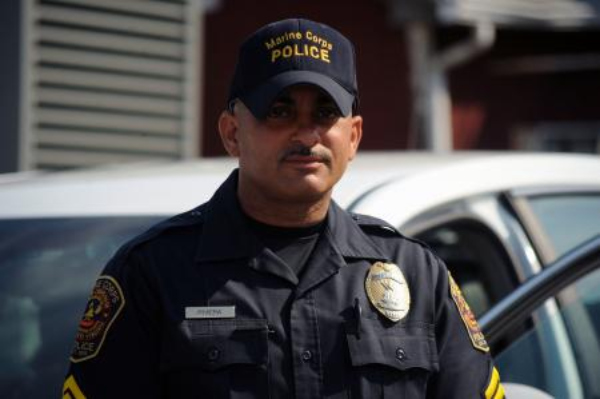 Learn more about how to become a Marine Corps Police Officer, including the requirements, training, civilian career opportunities, and much more.