Even the military needs members willing to step forward as model representatives to police the base and keep individuals safe.

After all, most Marines will not have weapons on them while stationed at their main base, so everyone is very vulnerable in the event of crime or an attack.

This is where Marine Corps Military Police, or MOS 5811, come into action.

MOS 5811 is the designation for Marines who are military police officers.

These servicemen, and women, are responsible for policing military bases all over the world.

They do most of the same things that police officers do in the civilian world but are dealing exclusively with military members and their families.

While deployed, military police may get unique patrol opportunities, security details for VIPs, and be exposed to incidences while manning the gates that go in and out of bases.

Additionally, Marines in the 5811 MOS have several opportunities available to them for more advanced training.

Requirements and Qualifications
Training and Career Path
Pay And Benefits
What’s Life Like as a MOS 5811?
Civilian Career Opportunities

Which one you attend depends largely on where you life. For the majority, anyone living west of the Mississippi river will attend MCRD San Diego, and anyone east will attend Parris Island, SC with a few exceptions. All women will go to Parris Island.

After basic training, all Marines who are not infantry will attend Marine Combat Training for 3 weeks.

Individuals interested in becoming military policemen, will be sent to United States Army Military Police School where they will attend the Law Enforcement Military Police Course under the Marine Corps Detachment at Fort Leonardwood, MO.

The training lasts up to 20 weeks where Marines will learn everything from firearms handling, defensive driving tactics, penal codes, military laws, and security prevention tactics for a military installation.

Additionally, Marines will spend several hours doing patrols and on-the-job-training while at the school and when first arriving at their duty assignment.

After a period of time with their unit, Marines in the 5811 MOS may be eligible to attend more advanced training and schools to increase their skillsets.

They must be willing to undergo rigorous training and be prepared to step forward and be the frontline who stands between attackers and military service members.

How Much Are Marine Corps Military Police Paid?

Marines in the MOS 5811 are not eligible for any special pay apart from the basic military pay, dependents pay, and the occasional hazard pay.

Those pay adjustments are varied by location and individual so they will not be discussed in this article. However, the basic pay for all members of the military from ranks E2 through E4 will be added in this article.

This is simply due to the fact that almost everyone interested in joining the military police as their first MOS will be between the ranks of E2 and E3 by the time they attend and complete the basic Law Enforcement Military Police Course.

However, Marines interested in lateral moving to this MOS after 2 years may be around the rank of E4, so they have also been included in this pay chart.

The pay scales for these ranks are shown below.

It is important to note that members of the Marine Corps receive additional incentives to help compensate for the low starting wages.

Additionally, they get free, or discounted, room and board and receive at least 2 free meals per day with the possibility of having 3 to 4 meals per day.

These are all benefits that are free and not deducted from the initial pay for single Marines.

This is one of the few military occupations which require someone to be on duty 24 hours per day 7 days per week.

An individual serving as a military policeman, or woman, will become accustomed to working shift work with a schedule being something like, 4 nights on 3 days off, and 3 days on with 4 nights off.

Of course, this will vary by command and the needs of the Marine Corps, but shift work will be a common part of life for anyone serving as a 5811 marine MOS.

What can be expected while on shift? Well, every shift will be different.

One aspect of being a policeman, or woman, in the military, that is uniquely different from their civilian counterparts, is the fact that Marine Military Police are often tasked with standing guard duty at gates.

Therefore, a shift may be nothing more than monitoring a gate post for up to 12 hours, verifying credentials of persons entering and exiting the base, and keeping a lookout for any suspicious vehicles or activity.

When not standing post at a gate, military policemen, and women, will be tasked to patrol sections of the base.

The base will be sorted into patrol zones where a varied number of officers will be required to patrol and monitor those zones during their shifts.

Their uniforms will have a badge on the pocket, and they will be wearing a service belt that consists of their sidearm, nonlethal force weaponry, handcuffs, and any other tools and equipment that may be necessary to safely perform their job.

Their daily lives are never the same and, much like policemen and women in the civilian world, they may encounter a multitude of unique problems daily.

While deployed, military police may be asked to stand guard duty at gates, escort VIPs around dangerous territory, or establish positions of security and overwatch in a city for specific events.

Two recent persons who served in the 5811 MOS found the job to be enjoyable, but they both agreed it could be stressful and extremely demanding.

They both enjoyed their time serving as military policemen, but desired to pursue other careers outside of the military.

One of the reviewers mentioned that it was difficult having to relocate regularly and the transition of going to a new unit was stressful and undesirable.

This is something worth considering for anyone interested in joining the military.

Marines that serve as military policemen, and women, are more than prepared to enter the civilian world and pursue a career as a law enforcement officer for their hometown, their county, or as state policemen for the state that they call home.

It is an easy transition and some agencies are even offering bonuses and pay incentives for personnel who have military police backgrounds.

Police officers are expected to have a job growth of 5% with annual salaries of $63,380 nationwide.

This is a lucrative salary with plenty of growth opportunities for anyone interested in advancing their careers as law enforcement officers.

Additionally, time in military service can be counted towards retirement for anyone interested in serving a full 20 years as a police officer.

For individuals not interested in continuing their time as police officers, careers abound in private security.

These firms may be able to pay better than local police agencies, but this is situational.

In addition, Marines who have left the military police may find opportunities to work for government contractors in countries abroad.

Finally, there are several federal agencies in need of military members who have a thorough understanding of how to write police reports, follow the chain of custody, and handle evidence without tampering with it.

If none of these options sound promising, then Marines will find many opportunities are available for using their Post 9/11 GI Bill.

There are countless schools and training programs around the country where Marines can use their GI Bill to complete a school and immediately find work with a trade or vocation.

College and 4-year universities are also an option for anyone who is looking to pursue education through their GI Bill.

How To Become A Marine Corps Police Officer 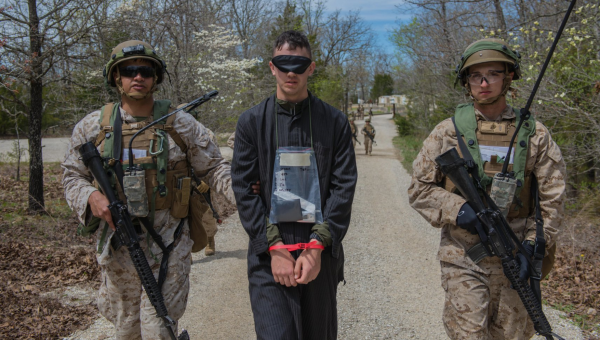 Learn more about what it takes to become a Marine Corps Military Policeman, including the basic requirements, training, civilian career opportunities, and more.