Did Joe Biden have military service prior to becoming the 46th President of the United States?

It’s important to some citizens that the Leader of the Free World has served in the Armed Forces.

After all, the President acts as Commander-in-Chief, determining all crucial military decisions.

Learn more about the history of Joe Biden and his military service.

Did Joe Biden serve in the military?

No, the current President of the United States never served in the military.

Rather, President Biden was fortunate to avoid military service thanks to his studies in higher education.

During the Vietnam era, the military draft existed yet several exemptions were granted.

For example, U.S. citizens could receive a draft deferment due to a medical condition.

As a result, President Biden was not in the Vietnam War.

Rather, he received the classification of I-Y which meant Biden would only need to serve the military in the event of a national emergency.

Therefore, Biden was disqualified from service because of asthma as a teenager.

However, his son – Beau Biden – did serve in the U.S. military.

Beau Biden, the late-son of Joe Biden, did serve in the U.S. Armed Forces.

He was a major in the Delaware Army National Guard during the War in Iraq.

Beau enlisted in the U.S. military in 2003 and moved up the ranks to Army Major in JAG corps.

JAG Corps represents the department of the U.S. Army composed of officers that are also lawyers.

For this reason, the oldest son of Joe and Neilia was deployed to Iraq in 2008.

He was a recipient of the Bronze Star during his time of military service.

Furthermore, Beau Biden represented Delaware as the 44th attorney general from 2007 to 2015.

Tragically, Beau was lost a battle with brain cancer and passed away in 2015, at the age of 46.

For reasons unknown, Hunter Biden decided to join the US Navy as an officer at the ripe old age of 43.

While the age limit to become an officer in the Navy is typically 42, it is possible to join via an age waiver.

Since he is the son of a powerful politician, it was relatively easy for him to receive one of those waivers.

Hunter Biden had a past drug-related incident, he also needed to procure a moral waiver.

Hunter was commissioned as an Ensign on May 7, 2013, and was assigned to a reserve unit based out of Norfolk, VA.

However, just a month later he was given a random drug test, which turned up positive for the presence of cocaine.

As a result, his brief military service was cut short, being officially discharged in February of 2014.

There are many frequently asked questions about Joe Biden military service in Vietnam.

The Vietnam War was unpopular partly because it was the only U.S. invasion to-date to instill a draft.

Consequently, many felt it was unfair who got drafted (and thus required to serve) and those that elected to remain back home.

Nevertheless, here are answers to your questions:

The draft deferments were granted during his time as an undergraduate at the University of Delaware.

President Biden was assigned 1-Y classification which meant he would only get drafted in the event of a national emergency.

Joe Biden has been transparent about his Selective Service records for years.

According to the documents, Biden was “disqualified from service because of asthma as a teenager”.

There were several medical exemptions provided to U.S. citizens that were incapable of serving in one regard or another.

Thus, President Biden was not in the military and never saw combat in Vietnam.

Is Joe Biden a good Commander-in-Chief?

It may depend on who you ask, however, the President does have connections to the military even if he never personally served.

His oldest son, Beau, was a distinguished Army veteran while another (Hunter) also enlisted in the Armed Forces.

Additionally, Biden witnessed how Barack Obama handled the role while acting as his Vice President from 2009-2017.

Joe Biden – the 46th President of the United States – did not serve in the U.S. Military.

Instead, Joe Biden was able to avoid military service due to a medical exemption.

It was confirmed that Biden was disqualified from service due to asthma during his stint as Vice President under the Obama administration.

However, President Biden was very proud of his late son – Beau – who did serve in the U.S. Army.

Beau Biden was an Army Major in JAG Corps and received a Bronze Star. 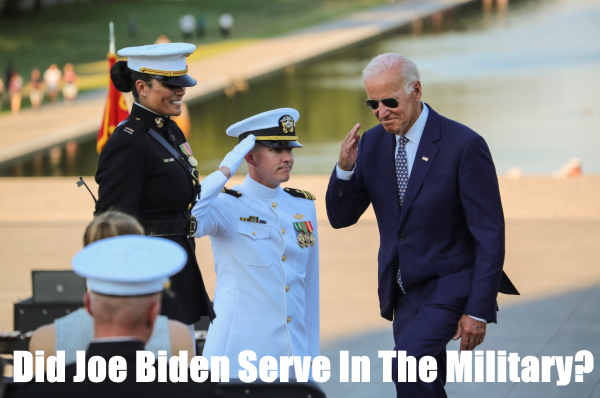 Did Joe Biden have military service prior to becoming the 46th U.S. President? Get the truth along with some of the biggest misconceptions.

2 Replies to “Joe Biden Military Service: Did He Actually Serve?”