“Kilroy was here” was everywhere during World War II.

The reference, accompanied with a graffiti sketch of a long-nose lurker, was a meme 50 years before the invention of the Internet.

In fact, soldiers found the military graffito scrawled on everything from rail cars to bathroom stalls.

Discover the meaning of “Kilroy was here” and 6 other things you didn’t know about the original military meme.

“Kilroy was here” was a popular military graffito during WWII.

The graffito consisted of a bald-headed man with a long nose snooping over the top of a wall with the common saying.

Soldiers from WWII report that “Kilroy was here” graffito was so prevalent that it transformed into a type of meme, decades before the invention of the Internet.

The ominous message appeared on everything from rail cars and battle-torn walls to bridges and bathroom stalls.

For this reason, veterans of World War II began referring to the bald man as Kilroy.

The same, traditional pose of Kilroy lurking over a wall with his nose draped over and fingers curled around the edge was usually followed with a witty message.

Thus, soldiers were more or less sharing ancient memes with each other to stay entertained as well as distracted from the horrors of war.

According to a former editor at Newsweek, “The outrageousness of the graffiti was not so much was it said, but where it turned up.”

The original creator of “Kilroy was here” remains under speculation.

However, the unusual history of “Kilroy was here” (more details, below) traces its origins to World War I, perhaps even earlier.

“Kilroy was here” began to lose prominence after the 1950s, however, the symbol remains recognizable.

The graffiti can still be spotted around the globe even if modern artists are unaware the image has roots in military service.

In fact, the platinum-selling 11th studio album from Styx (featuring the hit single “Mr. Roboto”) was titled Kilroy Was Here.

The phrase remains noteworthy in pop culture and – potentially – the first meme ever created.

Here are 6 other things you may not know about the meaning behind “Kilroy was here”:

“Kilroy was here” was not originally created by American soldiers.

Rather, the oldest known versions of the military graffito dates back to World War I.

It’s reported that Australia, New Zealand, and British forces etched the same image on walls with the caption: “Foo was here.”

Later, during World War II, British servicemen continued to sketch the image on any surface they could utilize as a canvas.

However, the difference was British troops referred to this bald headed, long-nose character as “Mr. Chad”.

It appears that U.S. soldiers began noticing the military graffito during this time period, and embraced their own version of the creeper.

Thus, “Kilroy was here” was born and the meaning of the term was never the same again.

It became a symbol of pride for soldiers that wanted to notify opposing forces there wasn’t a place in Europe they couldn’t reach.

As a result, “Kilroy was here” images usually included amusing terms sketched in the most obscure locations.

Is it possible that “Kilroy was here” was the first meme ever created?

Of course, WWII presided the Internet but that doesn’t mean troops still needed a method to maintain morale.

Consequently, the “Kilroy was here” meme was an opportunity to provide soldiers with a quick laugh.

The 4 years U.S. servicemen were involved in WWII were tough, dangerous, and isolated.

As a result, “Kilroy was here” served as cheap entertainment for disgruntled soldiers tired of rations and being away from home.

Even better, the phrase offered hope and reassurance to arriving platoons that American soldiers had been in the area.

“Kilroy was here” was even spotted on the side of a missile that had penetrated enemy territory.

#3. “Kilroy was here” concerns the Enemy

It’s well documented that axis-nations were disturbed by the frequency of the image throughout Europe.

Both the “Kilroy was here” and “Mr. Chad” memes appeared to hint at an ominous figure.

The British version, Mr. Chad, reportedly derives from the Greek symbol for Omega.

Omega, and the imagery of Kilroy, suggests that “someone is watching”.

It’s a connotation that Adolf Hitler appeared to take seriously.

In fact, it’s believed that German intelligence considered the phrase a code name for a high-level Allied spy.

Meanwhile, Josef Stalin reportedly became so incensed with a diagram on a bathroom stall that he ordered whoever sketched it be shot immediately.

It’s true, the two dictators regarded Kilroy as a master spy, the equivalent of a yet to be created James Bond.

The debate over the origins of “Kilroy was here” is the most controversial element of the meme.

In fact, the American Transit Association featured a radio contest in 1946 to determine the real Kilroy.

The contest resulted in more than a dozen men coming forward and claiming they were the inspiration behind the sketch.

The winner of the contest, James J. Kilroy, claimed he created the phrase while employed at a shipyard.

Kilroy reportedly sketched the words in yellow crayon inside a tank he was continuously told to reinspect.

Meanwhile, another Kilroy (Francis) claimed the term was inscribed over the wall of his barracks as he recovered from the flu virus.

Lastly, one final wild theory argued that the term was wrote on various parts of ships as they were produced at the Fore River Shipyard in Massachusetts.

Once rations became less common, the joke of “Kilroy was here” faded from memory of WWII vets.

However, that didn’t prevent the saying from repeatedly turning up in various forms of pop culture.

He appears in a poem by Peter Viereck who states: “God is like Kilroy. He, too, Sees it all.”

Later, the graffiti appeared in a 1975 episode of M*A*S*H along with a recent sneak appearance in the opening credits of Community.

Perhaps the most famous appearance of Kilroy in pop culture was an appearance in Peanuts.

The 1967 comic features Snoopy drawing the bald headed figure, keeping the meme alive for another generation.

#6. And there are even more names…

British and American troops may argue over which figure came first, but it’s not the only name associated with the image.

“Foo was here” was another meme that traditionally accompanied the image of a bald-headed man.

Foo was considered a gremlin by the Royal Australian Air Force that apparently came up with the name based on the acronym of an unpopular Forward Observation Officer.

Most historians claim that “Foo was here” predates the American version by 25 years or more.

“And so was Smoe” was another phrase that sometimes followed “Kilroy was here”.

The term was a reference to Joe Shmoe and, while utilized nearly as much as Kilroy in Europe, didn’t experience the same type of pop culture resurgence.

Meanwhile, other countries have their own interpretation of Kilroy:

Kilroy, however, will always remain more endearing in the hearts of Americans.

“Kilroy was here” was a meme before most even knew what that term meant.

The phrase traveled all throughout Europe as soldiers sketched the drawing on everything and anything.

The military graffito was popular during WWII as a boost to troop morale.

Kilroy was often accompanied with funny sayings and even sketched out ruthless dictators.

Adolf Hitler viewed the cartoon as a threat to national security, assuming he was some type of master spy.

Today, “Kilroy was here” remains relevant in pop culture even though many do not know its origins as a meme in the military. 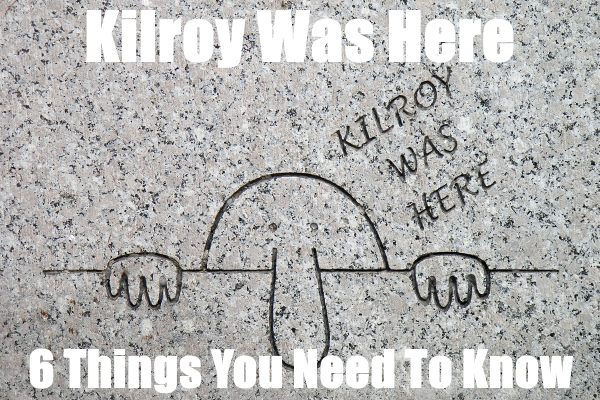 Kilroy was here was graffiti used by soldiers in WW2 that might have been the worlds first meme. Learn more here.