The entire month is reserved for military personnel along with veterans that have served this great nation.

National Military Appreciation Month is a tradition every May.

The month-long observance is dedicated to active duty service members along with military retirees and veterans.

Therefore, it’s important to acknowledge this special event and demonstrate appreciation toward a fellow service member.

Military Appreciation Month was established in the late-20th century to acknowledge the tremendous service of troops.

For this reason, it’s recognized along with other holidays reserved for the military (i.e. Armed Forces Day, Veterans Day).

The military anniversary remarks an incredible accomplish as well as sacrifice service members make for their country.

Therefore, Military Appreciation Month is designed to recognize military personnel of the following branches along with the contributions of spouses:

The history of Military Appreciation Month is recent as the observance became official in 1999 (more details, below).

The U.S. Congress designated May as National Military Appreciation Month in 1999.

The observance was created to generate more public support for the amazing sacrifice of service members and spouses.

As a result, the month is May a special opportunity to demonstrate support for military personnel.

It’s crucial to recognize troops – past and present – for their duty to the country.

Military Appreciation Month was established by the late-Senator John McCain.

The military awareness campaign was the proclamation made by President Clinton.

Each year, the president makes a proclamation reminding Americans about the vital role U.S. Armed Forces play in protecting the nation.

In May 2000, the month long observance was celebrated for the first-time.

Congress selected May because several other military observances, like Memorial Day, are also acknowledged in that month.

Military Appreciation Month happens over a month (May).

What is the difference?

The day-long celebration is comparable to the month long observance.

However, the history of Military Appreciation Day actually date back further (1949, to be precise).

The traditions of the military holiday include barbecues and picnics.

Military Appreciation Month, on the other hand, was only recently recognized by the U.S. Senate.

Regardless, both events are special opportunities to acknowledge the sacrifice and achievements of service members and veterans.

The event draws appreciation for the important role service members play in the establishment of the United States.

There are several other military holidays / observances (more information, below) that take place during May.

As a result, make sure to acknowledge each event separately while reserving the entire month to appreciating the efforts of military personnel.

Veterans and spouses also deserve recognition during May.

Military Appreciation Month is important because it:

Furthermore, civilians may feel like thanking a veteran for their service yet not understand how to properly approach the individual.

Perhaps they are afraid of making the veteran feel uncomfortable or offended.

However, there are several easy ways to thank a veteran for their service:

All of these methods (and more) are honorable and respectful ways to acknowledge military service.

May is designated Military Appreciation Month.

What does this mean?

The month is reserved for honoring active duty troops and veterans.

Meanwhile, it also extends to acknowledge the sacrifice and contributions made by military spouses.

There are several military observances and holidays that take place throughout May.

These events in May, include:

Military Spouse Appreciation Day occurs the Friday before Mother’s Day – another noteworthy observance for the sacrifices made by military spouses.

Armed Forces Day occurs the third-Saturday in May.

The purpose of the military holiday is to acknowledge the men and women serving the country.

Therefore, the purpose is slightly different from Memorial Day (May) and Veterans Day (November).

Memorial Day is one of the most popular national holidays that takes place the last weekend in May.

The holiday also usually serves as the unofficial start of summer and, therefore, a fantastic time to vacation with family.

There are several inspiring quotes about military service.

For this reason, simply quoting one to a veteran might make their day.

Often, ordinary people (aka civilians) do not know how to properly thank military personnel for their service.

Consequently, quotes about military service allow us to put words to our feelings.

“No man is entitled to the blessings of freedom unless he be vigilant in its preservation.”
-General Douglas MacArthur

“Guard zealously your right to serve in the Armed Forces, for without them, there will be no other rights to guard.”

The, the inspiring comments from Joseph Campbell:

“A hero is someone who has given his or her life to something bigger than oneself.”

And, finally, from the mouth of Winston Churchill:

“We sleep safely at night because rough men stand ready to visit violence on those who would harm us.”

Elmer Davis summarized it with “this will remain the land of the free so long as it is the home of the brave.”

What is the best way to celebrate the event?

Military discounts save money on travel and entertainment, along with products and services.

These companies include Fortune 500 businesses along with nationwide brands and services.

Hundreds of retailers offer discounts on products that vary from 25 – 75%.

As a result, it never hurts to find out what deals are being offered this National Military Appreciation Month.

For example, Memorial Day is notorious for offering veterans discounts or free meals at participating restaurants.

NASCAR recognized the month along with their annual Salutes Together with Coca-Cola program.

Service members protect the United States from enemy threats and sacrifice a lot in the process.

These include Armed Forces Day and Memorial Day. 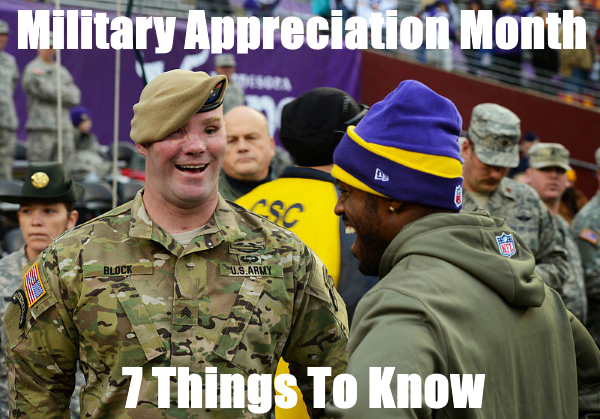