The new list of USMC bonuses includes several opportunities for incentives in the Marine Corp for 2020.

Also, the 2020 fiscal year begins October 1, 2019, so some bonuses appear to start last year, but they are still a part of the current fiscal year.

Often the Marine corps bonuses are related to Military Occupational Specialties (MOS) for both new recruits and those either staying in or making a lateral move into a high-demand field.

The first is when you first agree to be a Marine.

The second is when your term is up and it’s time to decide if you wish to reenlist, often referred to as a re-enlistment bonus.

Check out the details below to find out more.

A recruit may receive a bonus in two different ways at the beginning of their enlistment.

These bonuses are a Shipping Bonus and a MOS Bonus.

One way to obtain a bonus at the beginning of your career is by agreeing to attend boot camp during a specific month.

First, if you agree to ship to boot camp during the months of December to May, you will receive a $3,000 bonus upon graduation.

Also, if you agree to ship to boot camp the other months of the year, you may be eligible for a $2,000 bonus.

To qualify, you must be eligible by meeting some expectations.

However, you must be at least 17 years old at the time of enlistment but under age 29.

You must be a legal resident, have your high school diploma, and pass a physical exam.

Furthermore, you must score at least a 50 on the Armed Forces Qualification Test (AFQT).

Another signing bonus that makes the Marine Corps bonus list is related to the Military Occupational Specialties (MOS).

Also, a recruit who joins and agrees to fulfill a specific MOS for the duration of their enlistment contract is eligible for this bonus.

The Selective Retention Bonus (SRB) is an incentive for enlisted members to reenlist so the Marines may retain personnel with critical skills.

Typically, the higher USMC bonuses go to those positions that are the most difficult to fill.

The SRB in the Marines is calculated by taking into consideration the MOS, rating, and zones.

The zones are as follows and are related to active duty service:

Also, for each Zone, there is only one payment. If a service member receives a Zone A bonus, they would need to move to a Zone B bonus later.

For Marines who qualify for the SRB must serve in the MOS of which they received the bonus.

Also, for those who fail at this requirement may have to pay the bonus back.

However, there are some exceptions.

There are four kicker incentives for 2020 broken down by Zone.

The four kickers include the following:

This bonus is available for those who reenlisted for four years by the end of September 2019.

Please note – the abbreviate LM indicates a Lateral Move Bonus, which we discuss in more detail in the following section.

Lastly, the following tables are the reenlistment Bonus Kicker for the different Zones concerning MOS and paygrade.

For Marines from Corporals through gunnery Saregeants with qualifications in certain areas and who reenlist for 48 months may qualify for a $20,000 kicker.

In this case, there must be an agreement the Marine will stay in a specific field for the first two years of the new contract.

Any Marine if Zone A or B who is an Air Traffic Controller as a primary MOS I eligible for a $20,000 kicker as long as the reenlistment is for 48 months.

Also, this kicker is in addition to the MOS bonus listed in the charts above.

There are two retention USMC Bonuses that focus on Marines serving as Sqaurd Leaders in the Infantry that include a bonus of $20,000.

Also, this bonus is in addition to the MOS reenlistment kicker in the charts above.

The first is the Squad Leader Development Program is or Marines who reenlist for 48 months additional service time and makes a lateral move as a squad leader.

Lastly, the second lateral move in this category is the Squad Leader OpFor kicker.

The Lateral Move Bonus information is included in the reenlistment details.

If a service member agrees to change their MOS over their military career, they must both complete the school or training related to the new MOS.

Furthermore, the contract of service must be fulfilled to avoid re-payment.

The lateral move program allows Marines to either stay in their MOS or move to a different area.

Some MOS’s are closed for reenlistment.

Therefore, when a MOS is closed, and a Marine wishes to continue service, they need opportunities to find something they enjoy doing.

Furthermore, the Lateral Move Initiative allows Zone A Marines to reenlist for 72 months.

Those Marines who do take the 72 months in addition to one of the Lateral Move listed in the chart above for Zone A will receive an additional 40,000 bonus.

However, the Lateral Move Initiative cannot be combined with another kicker.

Also, the Lateral Moves listed in the reenlistment USMC bonuses section are a push for specific fields to move into areas such as Intelligence or Cyber Defense.

Lastly, a lateral move does depend on qualifications, including the ASVAB score. If your score is low, however, you may retake the test.

There is more than one opportunity to earn a bonus in the Marine Corps.

At the beginning of your military career, there are enlistment incentive USMC bonuses.

One of these enlistment incentives is called a Shipping Bonus.

The other is a MOS bonus, which is related to the career field you agree to enter.

Also, the Marines prefer to retain personnel in specific career areas, and they look for Marines with the necessary skills.

The amount of the bonus depends on the job itself as well as the years of service.

This bonus is called the Selective Retention Bonus.

Also, under the umbrella of Selective Retention Bonus are four kicker programs.

These kicker programs include early reenlistment and look for Marines in the area of Aviation Maintenance, Air Traffic Controller, and Squad Leaders.

The Kicker Bonuses are useful to give an added incentive, on top of the retention USMC bonuses, to fill a specific MOS with highly-skilled Marines. 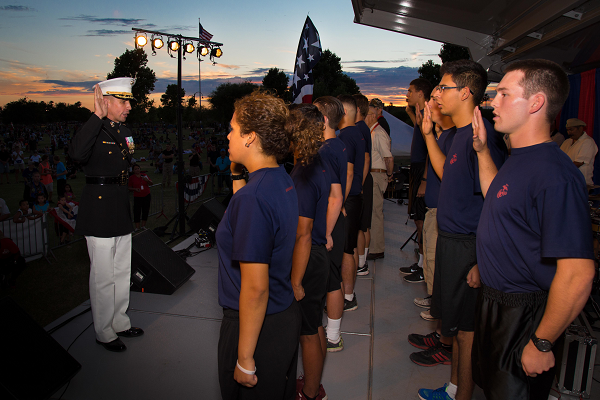 Learn more about the various Marine Corps bonuses available for both enlistment and re-enlistment, MOS-specific, and retention bonuses.