Marines are stationed at sites throughout the world to help defend the United States and its allies.

The Marine Corps Security Force Regiment (MCSFR) aims to keep national assets safe from enemies of the United States with a concentration against terrorists.

The Marine Corps is the strongest forward-deployed fighting force to support naval and security operations.

Below are the five things you need to know about Marine Fleet Anti-Terrorism Security Teams.

#1. What Is the Marine Fleet Anti-Terrorism Security Team?

With a focus on anti-terrorism, FASTs need to handle a wide variety of operations.

To make it as a FAST team member, a Marine needs to be skilled in several areas to include:

These units deploy throughout the globe to support Naval and anti-terrorism missions.

They separated the globe into three different operating areas for deployed FAST Companies.

These three stations are vital in providing security and services for the United States and its allies worldwide.

The term team may seem like a small force, but with around 300 Marines per FAST Company.

Each company comprises six platoons of 50 Marines, each company has of fighting power.

The Marine Corps established FASTs back in 1987 with a different mission in mind.

Throughout the team’s early history, it was used throughout World War II to provide security for essential locations such as bases in what is now known as Naval Amphibious Base Little Creek.

With the rise of worldwide terrorism in the 1970s and 1980s, the United States saw the requirement for establishing a force dedicated to combating terrorism.

The Fleet Anti-terrorism Security Team was officially established in 1987 to combat the rising threats.

They deployed the 1st FAST Company to Rodman Naval Station in Panama in 1988 to defend it from a Cuban special operations unit that wanted to sabotage United States POL stockpiles.

To become a member of a Fleet Antiterrorism Security Team, there is extensive training involved to transform a civilian into a FAST member.

You need to talk to your local Marine Corps recruiter and show interest in becoming a security force member to start the process.

Once medically cleared, they will assign you a recruit training ship date.

All enlisted Marines attend recruit training, which transforms them from a civil to a basic Marine.

Next, you will attend the School of Infantry to gain your primary military occupational specialty (MOS) 0311 Marine Rifleman.

The follow-on school is the four-week Security Force School, where you would either become a MOS 8152 (Basic Security Guard) or 8154 (Close Quarters Battle Team Member).

To be selected as an 8154, the candidate must volunteer and pass selection.

The Close Quarters Battle school is an intense eight-week course where the Marine learns to engage enemies in a closed environment.

You may think that this may be the end of their training, but you would be wrong because there are a few more high-level schools that FAST members attend before hitting the fleet forces.

The following school that an 8154 will attend is the tactical driving school.

Next comes a high-risk personnel school where the Marine will learn to become a bodyguard for a high-valued person.

This school teaches the Marine how to properly defend and protect high-risk personnel in a close quarters environment.

Another exciting course they attend is the Helicopter and Rope Suspension Techniques Master Course.

While attending this course, Marines learn how to fast rope from a helicopter for fast deployment.

This training would come into play if they deployed a Fleet Antiterrorism Security Team to take control of a naval vessel or an embassy.

With a concentration in close quarters combat and personnel protection, FAST members’ gear is specialized for their mission set.

Like standard infantry units, they equipped FAST members with M4s, M27s, Beretta M9s, Squad Automatic Weapons, and other mission-oriented weapons such as shotguns for breaching.

Each Fleet Antiterrorism Security Team member must be trained in non-lethal weapons and techniques at the Non-Lethal Individual Weapons Instructor Course.

Each Marine is sprayed with OC spray during the course while defending themselves with a baton against targets during an obstacle course.

Any Marine who attended the training would tell you it was a miserable experience.

The life of a FAST member is fast-paced and consists of consistent training to improve the unit’s efficiency and combat readiness.

During training operations, it is common to see role players and simulation ammunition used for realistic training.

The simulated ammunition is like paintball rounds, except that issued weapons can use them.

The Marine Fleet Antiterrorism Security Team has been a part of several essential operations throughout the last few decades.

Below are the notable missions that Marine FASTs have been a part of:

Every day, Marine Fleet Antiterrorism Security Team members are ready to take on any mission that is thrown at them.

Thanks to their hard work, dedication to duty, and hardcore training.

Marine Fleet Antiterrorism Security Teams are highly skilled warriors that have dedicated their lives and training to anti-terrorism operations.

These Marines are dedicated to going through months of basic and advanced training to become FAST members.

These skills range from tactical driving school to fast roping from a helicopter onto a naval vessel.

No matter the clime or place, A FAST can deploy at a moment’s notice to assist in security, special, or close quarters combat operations.

Throughout the three regions of FASTPAC, FASTCENT, and FASTEUR a FAST can be anywhere in the world in minutes.

If you are looking for an adventure and would love to see the world, becoming a FAST member is an excellent opportunity.

On their off time, FAST members can experience the local cultures and see things that some people can only dream of.

If this sounds interesting to you, talk to your local United States Marine Corps recruiter today. 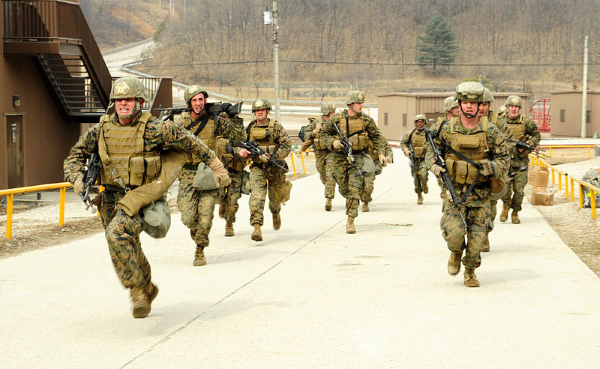 Marine Fleet Anti-Terrorism Security Team, or FAST Teams, are a specially trained division of Marines that respond to rapidly developing missions around the world.