If you are in the Army, TIMS has likely come up in conversation.

However, the term TIMS meaning might not be evident for everybody.

The Army works hard to build a sense of teamwork a bond among soldiers.

Related Article – What Is A POG In The Military? And 5 Other Military Terms

What Does Army TIMS Mean?

TIMS stands for “This Is My squad.”

This term came about after an initiative to build cooperative and strong teams in the Army.

The idea is those who serve on a team are bonded and share a connection.

It is within this connection that leadership can see potential among teammates and efficiently solve problems that arise.

TIMS creates a culture that is necessary for Army strength.

This strategy of developing teamwork and team culture comes from a proposal titled “Army People Strategy.”

The best strategy has a focus on identifying the unique talents of every soldier.

There is a recognition that the strength in the Army stems from the individual skills of soldiers.

The Army TIMS strategy stems from the idea that individual ownership and the overall team’s strength are crucial.

For example, soldiers are accountable for their personal development and growth, but the team relies on members working together and investing in the team culture.

Also, leadership within the team requires the support of team members.

With TIMS, new team members socialize and acclimate to their new team.

This is a point where members get to know each other, and the team leader takes charge of those introductions.

This introduction is the moment to establish team culture and dynamics.

Also, as team leaders receive promotions, they join a new team, and someone else takes their place. This rotation keeps leadership fresh.

Leadership is vital with TIMS because high-quality leadership leads to confidence and success within the rest of the team.

Related Article – What Is A Navy Squid? 11 Slang Nicknames For Navy Sailors

There are other army sayings to know, as well:

Those who are not on a solid team might hear the phrase ‘Bravo Foxtrot’ being thrown around. This phonetic spelling stands for ‘buddy [email protected]’ and references somebody who does not have another soldier’s back. Pretty much, this phrase is the opposite of TIMS.

Another term to know is ‘Friendly Fire.’ Typically, ‘Friendly Fire’ means accidentally shooting or injuring a soldier on the battlefield when you’re on the same side. However, when referencing another person, it means a soldier who is not well-liked.

Lastly, another term to be aware of is ‘Fast Tracker.’ This term references a person who rises to leadership positions and ranks rather quickly. In this case, it often has a derogatory meaning as it suggests there is a lack of experience to go along with the leadership role.

TIMS is an Army term that references the unity within a team. The acronym stands for “This Is My Squad.”

The focus on teams evolves in the Army.

The idea is to build leadership skills within the team and focus on building a team culture that fosters an environment of growth and building upon the strengths of the individual members of the group.

Leadership within the team does not just revolve around ‘telling people what to do.’

Instead, the role of the lead is to work to create an environment where the team members willingly invest in the outcomes necessary for a strong team. 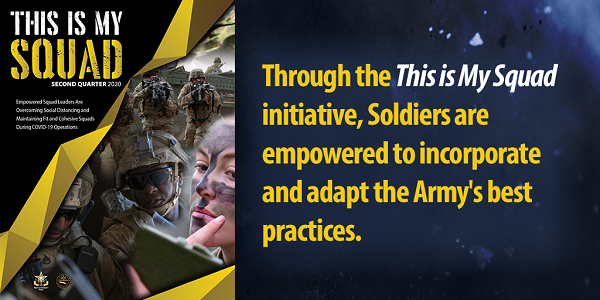 This Is My Squad, or TIMS, is a saying in the Army that was brought about after an initiative was started to help build strong teams.