In the first portion of the training, you will learn close quarter hand-to-hand combat.

This will be done through what is known as the Marine Corps Martial Arts Program (or MCMAP).

In this write up, we’ll give you a full explanation of what MCMAP entails and what you’ll be expecting as you will be taking part in the program.

This is a required program for any trainee who is on the path of becoming a Marine.

You want to be ready to fight in any situation, especially when no weapons are involved.

In fact, it’s you that is the weapon. Using the effective techniques that you’ll learn in MCMAP, you will be more dangerous than the enemy expected.

Let’s dive right into this to discuss what MCMAP is and what you’ll learn throughout the program.

As mentioned before, MCMAP is short for Marine Corp Martial Arts Program.

The program was installed in 2001 and has since trained countless Marines and Navy trainees (attached to Marine units) on how to utilize hand-to-hand combat skills.

They also learn defensive techniques for hand-to-hand combat as well as defending themselves from enemy attacks.

Hand-to-hand won’t be the only thing they’ll learn.

Trainees will learn how to attack using weapons of opportunity, bayonets, rifles, and other weapons that could be used in combat.

This will allow trainees to develop the skills they need and also sharpen themselves mentally while in combat mode.

They will learn how to use force responsibly, lead and work with a team.

Even though a related program focused on hand-to-hand combat existed prior to 2001, MCMAP has been more effective than ever before.

And compared to the Marines of the past, the newer generation is learning more effective techniques that will put them one step ahead of their enemy combatants.

2. What sort of martial arts are taught at MCMAP?

There are a wide variety of martial art disciplines that are taught at MCMAP.

We’ll be taking a look at some of the more popular ones so you get a good idea of what you’ll know during the MCMAP program.

Let’s go over some of these disciplines and what you can learn from them:

This form of martial arts teaches basic submission moves and holds. There will come a time when a fight will end up on the ground.

Of course, you’ll be learning escape techniques so you can gain the upper hand by easily escaping an enemy’s choke hold and countering their attacks.

You will learn basic takedowns to ensure that you bring the fight to the ground and put an end to it sooner rather than never.

A form of martial arts that is standard of the Israeli Defense Forces, Krav Maga is actually a combination of some of the other disciplines taught by MCMAP (including boxing, aikido, judo, wrestling, and karate).

This discipline is among one of the most punishing to an enemy and rightfully so.

You’ll learn different devastating strikes that can cause serious damage.

The strikes will focus on the most vulnerable points of an attacker’s body including the eyes, neck, throat, groin, knees, and fingers.

This is just a sample of the many strike points that you can engage in.

Judo or “the gentle way” might not be as gentle as you think. But it requires you to take down or throw your opponent, effectively redirecting their attack.

This also includes some submission moves such as a joint lock or a choke.

To better explain this discipline, it’s boxing mixed with kicks (hence the name).

This will allow you to use more than just your hands when you are in close quarters combat.

You will learn basic punches and kicks, allowing you to deliver multiple combinations that will end a fight quickly (and not too well for the enemy dumb enough to fight you).

3. What Are The Different Levels Of Belts At MCMAP?

When Marine trainees are going through MCMAP, they will be issued a tan belt.

This is the equivalent of a white belt in any normal martial arts discipline.

They will receive this after going through the initial training which includes 27 hours of training with no prerequisites.

Here are the rest of the level belts and what is required to attain them:

This is issued after 25 hours of training. Gray belts will have an intermediate level of understanding MCMAP basics.

Other requirements include the completion of the “Leading Marines” program via the Marine Corps Institute or MCI.

Depending on the instructor, practitioners will need to do a report on the famous Marine Raiders.

You will retain this level after 25 hours of training as a gray belt.

At this level, you will have an intermediate level of understanding some of the multiple disciplines taught by MCMAP.

At this level, you can be able to instruct recruits if you so choose.

However, the trainees must be at the lower belt levels in order to receive instructions from you.

After attaining the green belt, you can train for a total of 33 hours in order to receive a brown belt.

This will signify an advanced understanding and knowledge of several disciplines.

Like green belts, they can also become instructors but must report to their senior level instructors and abide by their recommendations.

There are six degrees of black belts. But as the highest level belt, you have an understanding of various disciplines that are taught by MCMAP.

You will also become a senior level instructor that teaches trainees and Marines who want to reach a higher belt level.

4. Are all Marines required to go to MCMAP training?

Yes. In fact, all Marines are required to undergo 27.5 hours of MCMAP training.

This will usually occur during the first four weeks of basic training.

The final week of MCMAP will occur on Week 4. At this point, they will test their martial arts skills and earn a tan belt.

Beyond that, they can choose to elevate to another belt level.

5. How long does it take to get a black belt in MCMAP?

The short answer: it depends. It may depend on whether or not you want to attain one.

When you do, you’ll be required to go through many hours of total training.

6. How effective is MCMAP?

It can be effective when executed properly.

Since you will be focused on various disciplines, you’ll be able to end a hand-to-hand combat situation fairly quickly.

Even at a tan belt level, the basic moves might just be enough to neutralize an attacker.

MCMAP is required for all Marines going through basic training.

But it’s one of the most effective martial arts trainings in the world. As a Marine, you must train yourself to be a weapon yourself.

Not every combat situation will require a bayonet or a rifle.

Once you have an understanding of the disciplines that will be effective in combat situations, you will be ready for the times when you have no choice but to fight. 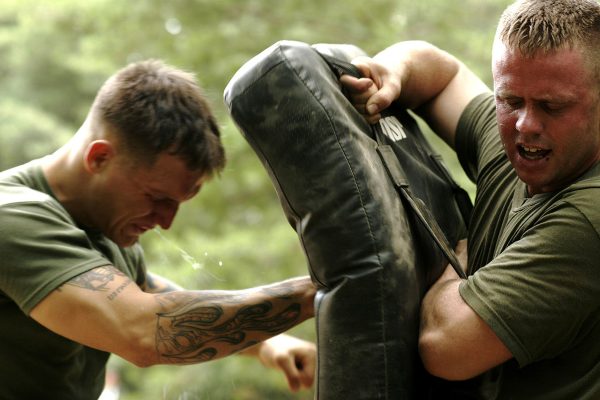 Learn more about the Marine Corps Martial Arts Program (MCMAP), including the types of training conducted, belts awarded, and more.