Here’s the complete list of Military Bases in Alaska, including their functions and stationed units.

It is a support and training base and is a key player in the Red Flag training exercises.

It has hosted and continues to host numerous Air Force wings, and is expected to receive over 50 of the new F-35 fighters in the coming years.

In Use: 1940-Present (Operating as part of Joint Base Elmendorf-Richardson since 2010)

It is home to the Alaskan NORAD facilities.

It hosts several air units with the intent of being immediately able to provide worldwide support and air dominance.

Overall Mission: Clear Air Force Station Base is primarily a radar monitoring station, designed to track ICBMs and other threats along the west coast.

In this capacity, it serves as an early warning station operated by the USAF.

It is located deep in the Alaskan wilderness, with only a few small communities nearby.

In Use: 1941-Present (Operating as part of Joint Base Elmendorf-Richardson since 2010)

Overall Mission: Fort Richardson is the Army portion of the Elmendorf-Richardson Joint Base in Anchorage.

The Army’s mission on the base is to provide training and readiness for global deployment.

It hosts almost 8,000 soldiers and is one of the largest training camps in the United States.

Several special forces units are stationed and trained there, including the “Arctic Wolves.”

Overall Mission: Fort Greely is a small but essential base over 100 miles south of Fairbanks.

It’s core function is to test and launch anti-ballistic missiles, which are designed to shoot down larger ICBMs.

It can also function as an extreme cold weather testing site for propulsion systems and other equipment.

The Coast Guard assumed control of the base in 1972.

It currently hosts 18 different coastguard units, in a combination of aircraft, helicopters, and cutters. 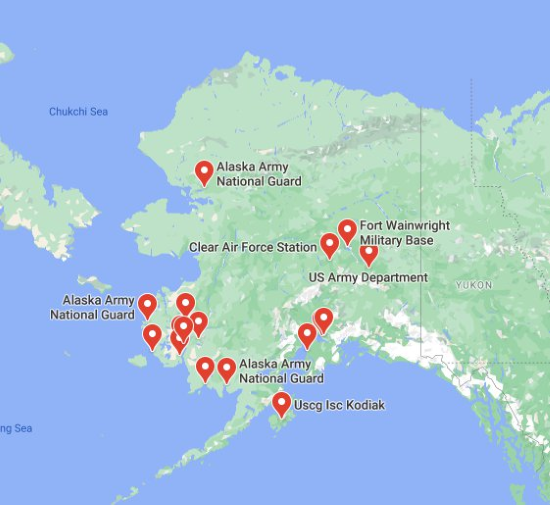 See a list of every major military base in Alaska, including Army, Navy, Air Force, and Coast Guard bases. AK is home to 7 major US Military installations.