Florida has a total of 16 active military bases, with all branches of the armed forces represented. They also have several Coast Guard operating bases.

Here we’ll list all the major military bases in Florida, complete with their location, stationed units, and core missions.

Overall Mission: Eglin Air Force Base predates the founding of the Air Force as its own branch of the military.

It started as a bombing and gunnery base and continues much of that mission today.

Eglin is the home station for the Air Armament Center, which is responsible for the acquisition, development, testing, and deployment of all air-based weapons used by the Air Force.

It is also one of three produce centers controlled by the Air Force, and is actually the largest military base in Florida.

Overall Mission: Hurlburt Field AFB branched off from Eglin AFB in the 1940s, and is 11 miles away to the southwest.

They also host the Air Force component for USSOCOM.

Overall Mission: Patrick AFB started as a Naval base, but was transferred to the Air Force in 1948.

It is located between Cocoa and Satellite beach.

It hosts and trains F-22 fighter squadrons, as well as maintenance crews and air traffic controllers.

It hosts two air wings, as well as branches of USSOCOM and the United States Marine Forces Command Central.

Its core mission is to provide short notice deployment of F-16 fighter squadrons.

It is also a staging area for emergency relief efforts for natural disasters in the southern hemisphere.

Overall Mission: Camp Blanding is a core training area for the Army and National Guard, as well as Special Forces squadrons.

Overall Mission: Air Station Clearwater oversees the air space and waters all around Florida and in parts of the Caribbean and Gulf of Mexico.

They work closely with the DEA and ICE by providing air support with Jayhawk helicopters.

They also perform search and rescue options around Florida and in the Gulf of Mexico.

Overall Mission: District 7 is actually a collection of 28 bases and operating stations throughout Florida, overseen by a central command in Miami.

The various station 7 bases are instrumental in thwarting drug trafficking through the east coast and the Gulf of Mexico.

They also work closely with INS and ICE.

Overall Mission: Blount Island Command has a unique, and relatively new objective when it comes to naval operations.

They host a Maritime Prepositioning Force, which loads and deploys ships with either tactical or humanitarian supplies, which then wait at sea for a destination.

They provide specific training to various types of troops through other branches of the military.

They’re also open to civilians and provide specialized training for civilians.  NAS Pensacola is also considered one of the largest military bases in Florida from a geographical perspective.

Overall Mission: NAS Jacksonville is a key hub for US naval operations in the Gulf of Mexico and other areas of the American southeast.

It is also the operating base for the Fleet Readiness Center Southeast.

NAS Jacksonville is also a core training facility for numerous certifications for both pilots and ground crews.

Overall Mission: The NAS Key West Navy Base in its current form was built in 1940, but Naval presence and operations in the area date back to 1832.

The base currently serves as a training and support facility for anti-submarine air support.

It also performs monitoring and surveillance of the air and sea around the area, and is rated as one of the best military bases in Florida to serve at.

Overall Mission: Mayport Navy Base is the dedicated home port for 22 ships, including a destroyer group, and an LCS squadron.

It has the ability to homeport up to 35 ships in total.

It is a key part of the East Coast’s readiness and deployment facilities.

It is also home to NAVAVSCOLSCOM, which trains aircrews, technicians, and numerous ground crew roles.

It is also home to several Air Force training units that work in collaboration with the Naval Aviation School.

The base also hosts the Pensacola Naval Hospital.

It also provides support and training for several other branches of the military, including the Air Force, Marines, and Coast Guard.

Overall Mission: AUTEC, or the Atlantic Undersea Test and Evaluation Center, is a research base headquartered in West Palm Beach, but many of its facilities are off the coast in the Bahamas.

Fleet readiness is one of its primary functions and regularly tests submarine officers and crews.

Overall Mission: The Naval Air Warfare Center is a research and testing facility, specializing in devices and software used by the US Navy and Marine Corps.

They oversee the development of training systems used by those branches.

Unlike some of the other bases in this article, this particular location is considered the smallest military base in Florida.

Overall Mission: The Naval Support Activity Panama City base is a research and readiness facility.

It hosts the Naval Surface Warfare Center, which is a research and development facility specializing in developing strategic technologies for surface warfare. 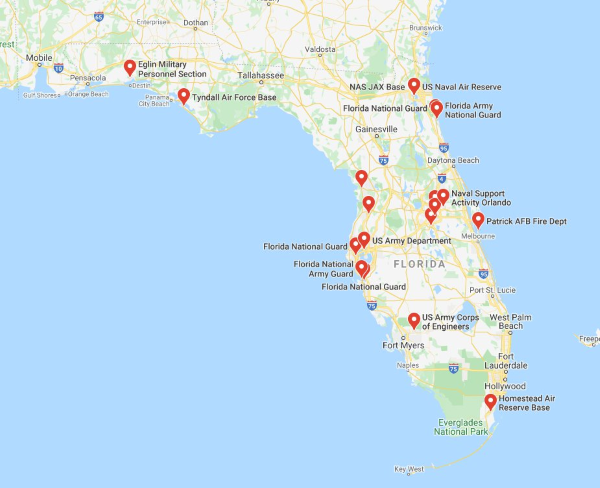 Check out our list of all 17 major military bases in Florida, including bases for the Army, Navy, Air Force, Marine Corps, and Coast Guard. Includes info on each base, including when it was founded and what units are stationed there.