California is a large state, and with that comes a large number of military bases.

The state holds 8 Army bases total, 5 of which currently house Active Army units, 2 of which house Reserve or National Guard units or training, and one of which is completely inactive at this time.

Many of California’s Army bases were founded during the time of the second world war, while a couple were formed in the early-to-mid 1800s.

These various founding dates show that every base in California has a rich history as well as a unique way of running today.

Most of the bases in California are active, or at least semi-active. Active bases have units stationed year-round, while semi-active bases serve as a place for history and for occasional Reserve or National Guard training.

Each of the state’s Army bases is shown below along with their location, years of use, mission, well-known units, and a link to their official site for any additional information you may need.

Overall Mission: Fort Irwin has a few main goals in its mission. These include conducting “tough and realistic” training, preparing Brigade Combat Teams for combat, and taking care of soldiers, families, and local civilians.

Overall Mission: Monterey works to provide BASPOS support to everyone they serve, as well as to enhance readiness.

Overall Mission: Fort Hunter Liggett’s main mission is to be a place to “live, work, and train.” They work to build mission readiness and quality of life for their soldiers and families along the way.

Overall Mission: Camp Parks PRFTA runs under Fort Hunter Liggett. It is known for its academics and battlefield stimulation, as well as its Military Intelligence facility.

Overall Mission: Camp Roberts began as a WWII base, and is mainly used for training National Guard troops today. It also provides space for civilian hunting and fishing.

The following California Army base no longer hosts units or training of any kind, but they are open to the public as a historical site:

Overall Mission: Fort Haan started as a place for training, ad later added a Prisoner of War camp as well as an Army hospital. 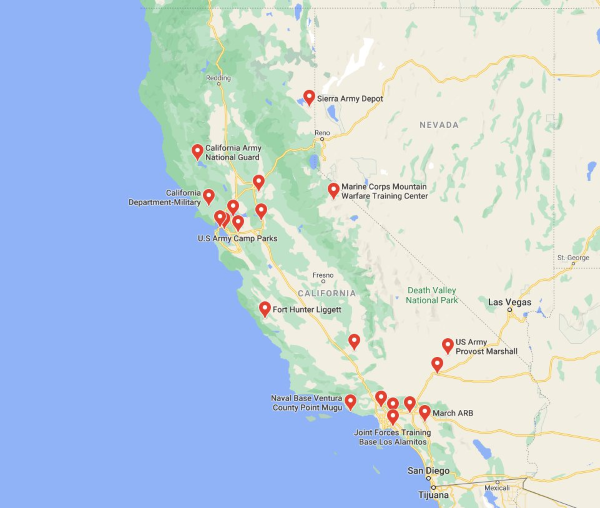 California is home to several Army bases, all necessary to the security of our nation. See a list of all 7 Army bases in California, including details of each and when they were founded.