Colorado is a unique state in that its location is perfect for many military operations and is primarily utilized by the Air Force.

With the exception of a few Army installations, the Air Force dominates this state in many ways that you don’t even get to see with a strong emphasis on the Space Wing.

Popular locations like the mysterious and impenetrable Cheyenne mountain and the widely praised Air Force Academy make Colorado a very popular state for those who go there for their service.

Let’s see what military bases in Colorado there are, and what makes them so interesting.

At just over 214 square miles in size, Fort Carson is actually the largest military base in Colorado.

It’s revered for its hospitality and ability to help train soldiers to a very high level.

Those who train at Fort Carson are often tested in various exercises and simulations to make sure they are ready to serve under a wide array of conditions and circumstances that are hard to replicate anywhere else.

Fort Carson has been a large center for deploying troops to the Middle Eastern conflicts for many years with its large facilities and ample space.

In an attempt to destroy and reduce the stockpile of chemical weapons that the US has possession of, Pueblo was established to ensure those weapons had a proper place to be stored and kept safe.

This is one of only two chemical weapons storage facilities in the country and is playing a vital role in ensuring the safe and complete disassembly of many old and dangerous chemical weapons from past wars.

As the depot is on their way to the destruction of over 2,600 tons of mustard gas agent, they are nearly complete in fulfilling the needs of what the base was set up to do.

One of the most famous landmarks for the Air Force, the Air Force Academy AFB is unique in that it is as much of a place of education as it is an Air Force Base.

The base is where new cadets go to get their basic training and can even complete college coursework to receive a degree in science with the accompanying rank of Second Lieutenant in the Air Force.

This academy is a very prestigious location in the eyes of both the Air Force and universities as a whole as it only takes in the top candidates who have a bright future in the Air Force.

Whereas most AFB’s focus in housing and operating specific aircraft for use by the Military, Peterson has the unique mission of hosting the Air Force Space Wing.

This unique base is the site where organizations like NORAD and USNORTHCOM are able to monitor various satellites and intelligence information to act as the first line of defense when missiles are launched anywhere in the world.

The base also has a traditional runway space that is shared with a local airport for when the base needs to have aircraft come in for any given reason.

In a very similar way to Peterson AFB, Buckley AFB is a base that is focused on helping the Space Wing keep eyes on the skies with a network of satellites that can be monitored from Buckley.

From a tactical standpoint, it’s considered one of the most important military bases in Colorado.

The 460th Group involves a number of smaller entities that help to take care of defense issues like missile detection, operation logistics, and even advancing medical readiness for troops.

While it is a technical Air Force Base, Buckley does not really focus on any particular aircraft maintenance or combat readiness operations.

As Colorado shows it’s true colors from a military perspective, the Air Force realized that it is the prefect place to set up operations for their space wing.

Just like it’s siter bases Buckley and Peterson, Schriever AFB is the home to the 50th space wing who is responsible for monitoring and controlling a wide array of satellites.

What makes this base unique is that it lacks any runways as the operations at the base are solely concerned with monitoring the satellite network of the space wing.

Fort Knox is usually the gold standard for secure installations, but anyone who knows anything about Cheyenne mountain AFB knows it can’t hold a candle to this immensely tough installation.

Built into a mountain with reinforcements added to make this base both incredibly hard to get into and one of the safest places in the result of nuclear attacks, Cheyenne Mountain is the natural home to NORAD and many secret operations.

As this base is located beneath a mountain with a number of impenetrable security checkpoints, there is no actual airfield as all operations conducted by every Military branch are conducted inside the heat of the mountain.

While it’s probably one of the most important bases in the country, Cheyenne Complex is actually the smallest military base in Colorado. 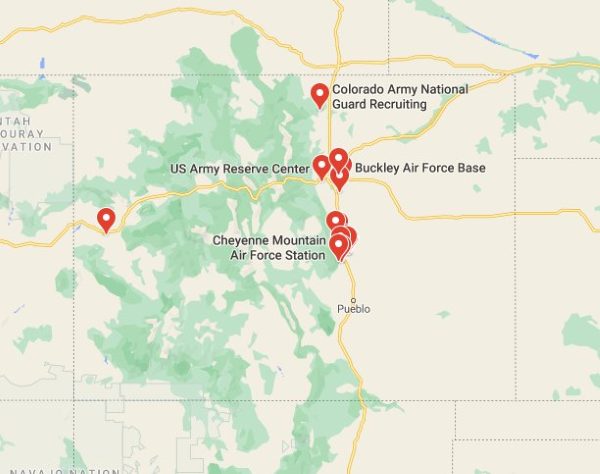 Colorado is home to 7 important military bases. They include bases for the Army, Air Force, and Space Force, but the Navy, Marine Corps, and Coast Guard do not have bases in CO.