There are a total of 19 active military bases in Virginia, including some of the oldest and most famous in the country.

Most of the bases are Army or Navy, but all five branches are represented with bases in Virginia.

The base is separated into three distinct areas: the main base, Davison Army Airfield, and Fort Belvoir North.

Many of the base’s functions involve intelligence and readiness.

Overall Mission: In 2010, Fort Eustis was merged with Langley AFB and now comprises the Army portion of the Langley-Eustis Joint Base.

Their primary mission is providing training and logistical support for the airborne and aviation divisions of the US Army.

The base closed briefly in the time between WWI and WWII but reopened when America joined WWII and has remained open since then.

The base hosts the Army Quartermaster School, as well as the Ordnance and Transportation Schools.

Overall Mission: Joint Base Joint Base Myer–Henderson Hall, has existed in some form since 1791, first as Fort McNair, and has absorbed Fort Cass, Fort Myer, and Henderson Hall as part of recent BRAC initiatives.

It is the base of operations for most military and security operations around the nation’s capital.

The honor guard for Arlington Cemetery is also stationed here.

It is operated by the US Army but is used by all branches of the Armed forces.

The base’s 42000 acres are used for a wide range of maneuver training, including urban operations.

Fort Pickett also is host to annual NATO exercises between the National Guard and elements of the Canadian Army.

Overall Mission: Warrenton Training Center is actually a series of four separate intelligence and communication facilities overseen and operated by the US Army.

The CIA, NSA, DoD, and DoS all perform classified operations out of the Warrenton Training Center.

The base is also a key part of the nation’s emergency communication system and tasked with maintaining communication capabilities in the event of all emergencies, including nuclear attack.

Overall Mission: Little Creek-Fort Story Joint Expeditionary Base was created by the Little Creek and Fort Story bases being merged in 2009.

It is the primary base for all Atlantic amphibious forces.

It is the largest amphibious operating base in the world, with over 15,000 personal and 27 home-ported ships.

Overall Mission: NSWC Dahlgren is the largest of six bases that make up the Naval Surface Warfare Center.

They are tasked with research, development, and testing of surface to surface munitions, but other units at the base perform strategy and readiness tasks.

Almost 6000 scientists and engineers are stationed at the base.

Overall Mission: Norfolk Naval Shipyard, which began life as Gosport shipyard, and has throughout its life been controlled by the British, American, and Confederate armies.

Its current mission is the repair and modernization of US Navy ships, with a particular focus on nuclear ships and submarines.

It is currently the only east-coast facility that builds and refuels nuclear aircraft carriers and is one of only a few in the nation capable of dry-docking an aircraft carrier.

Overall Mission: NAS Oceana is a master jet base, and hosts all navy fighter squadrons operating in the east coast/Atlantic region.

There are a total of 14 strike fighter squadrons based out of NAS Oceana, as well as  number support and training squadrons and ground units.

NAS Oceana also operates a carrier landing training platform, which enables training pilots on landing on a carrier without the risks to equipment or personnel associated with training on a ship under sail.

Overall Mission: The primary purpose of NWS Yorktown is the storage and loading of weapons and ammunition.

It is host to a total of 37 different units, which work together to provide logistical and technical support to Atlantic operations, as well as supplies and ordnance.

Overall Mission: Langley is currently the USAF portion of the Langley-Eustis Joint Base.

The mission of the USAF at Langley-Eustis Joint Base is to have aircraft ready for immediate global deployment to secure American air superiority.

The base houses approximately one-quarter of all F-22 Raptors in operation by the USAF.

Overall Mission: MCB Quantico is primarily a training, education, strategy facility, and is the home of the Marine Officer training school.

The DEA and FBI also have their primary training facilities on MCD Quantico.

The base also hosts the US Marine Corps’ Combat Development Command, which is responsible for developing and testing strategies for the US Marines.

Overall Mission: USCG Base Portsmouth is the result of the closure and combination of two other USCG Bases.

The primary missions are search and rescue missions and hurricane readiness.

Overall Mission: USCG Air Station Washington houses the Commandant of the Coast Guard, and is responsible for transporting USCG and other key personnel.

They provide onsite training for the Coast Guard and other agencies, as well as sending trainers to other facilities.

They also produce assessment and standardization programs for all other Coast Guard bases. 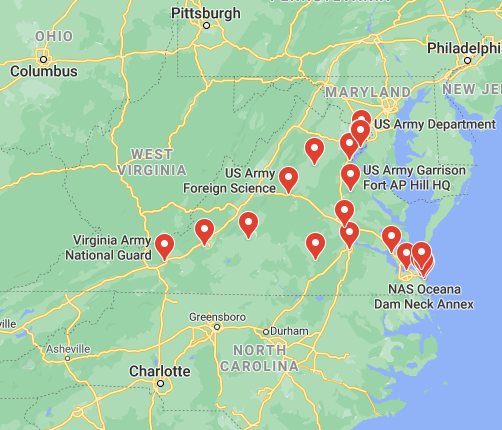 Virginia is home to 19 major US military bases. Learn more about each VA military base, including ones for the Navy, Army, Air Force, Marines, and Coast Guard.