There is a small number of US military bases in Italy, but each installation plays an essential role both for the United States and for US allies.

Italy currently has 1 Air Force Base, 3 Army Bases, and 2 Navy Bases. These bases range in history with founding dates between 1911 and 2013, as well as purpose with missions that include combat, airborne, support, engineering, and more.

Each of the US military bases in Italy is outlined below.

If you’d like to learn more about any specific base, follow the link to its official site (also provided below).

US Air Force Bases in Italy

Overall Mission: This base’s main unit is a Fighter Wing with all other units serving as their support.

Their mission is to “prepare, sustain, and deploy” combat-ready teams.

As an international base, they also strengthen NATO, deter and defend against enemies, and secure the US homeland.

US Army Bases in Italy

Location: Between the cities of Livorno and Pisa, Italy

Overall Mission: This is a small support base that works in the field of Logistics.

They store and maintain weapons and vehicles for US military forces, and move them when they’re needed for combat or other essential missions.

Overall Mission: This is a newer base that was built in 2013 to consolidate the forces of the 173rd Infantry Brigade Combat Team (Airborne).

Their mission is to gain “peace through strength.”

It’s also an energy and environmentally friendly base, and it keeps Italian ally relationships a main priority.

Overall Mission: This base is nearby Caserma Del Din, and they serve similar purposes.

Caserma Ederle is a joint base, however, with US Army units and Italian forces serving together.

This base is home to Airborne, combat-ready troops as well as the command in charge of all US Army installations.

US Navy Bases in Italy

Overall Mission: This base near the Mediterranean Sea is considered the Navy’s “Hub of the Med.”

It’s home to Italian forces as well as over 32 US commands and activities, so its missions vary greatly based on the team completing them.

Some of their focuses include Force Protection, Warfighter Support, Resource Management, Quality of Life, Sailor and Civilian Development, and International Relations.

Overall Mission: This is a large Navy base in Italy with over 50 different commands.

It has a convenient location near the Naples International Airport for potential air missions.

As its name suggests, it mainly focuses on support through various activities including Medical, Engineering, Communications, and more. 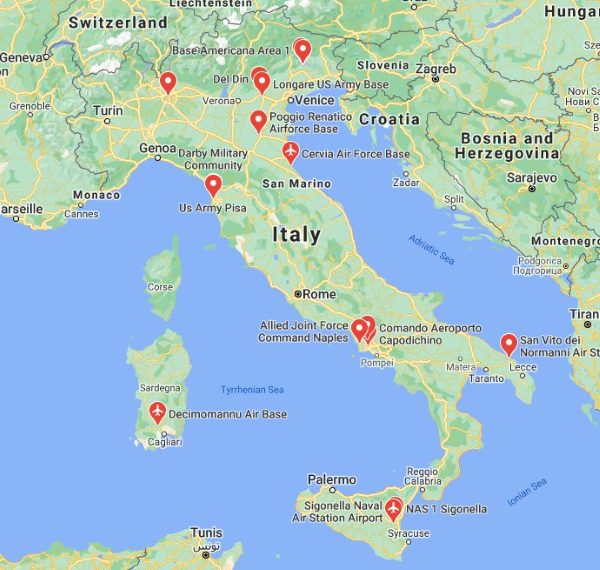 Italy is home to 6 major US military bases. Learn more about each American base in Italy, including bases for the Army, Navy, and Air Force.