Are you planning to enlist in the US Army as an active duty or reservist?

Or are you taking the National Guard route where you serve your country one weekend a month and two weeks a year?

Either way, you’ll be embarking on a 10 week journey known as Army Basic Training, or BCT.

In this guide, we’ll lay out the Army Basic Training Schedule for each phase of training.

If you are a parent or a spouse of a future soldier that will be headed to basic training soon, you’ll get a glimpse of what they’ll be going through.

There is no doubt that this training will be mentally and physically challenging.

But nevertheless, it will mold the enlistees into soldiers who will be serving in one of the world’s largest military forces.

If you want a preview of what will happen once you set foot on one of the five posts where your training will take place, keep reading.

Related Article – What To Bring To Army Basic Training

What Are The Phases Of Army Basic Training?

There are three phases of Army Basic Training. Incidentally enough, they are named phase red, white, and blue (the colors of the United States flag).

Each phase is a single block of multiple weeks. Let’s take a brief look at each of them:

Red Phase: This will occur in the first three weeks of basic training.

White Phase: Starts at week four and concludes at the end of week five.

We’ll be doing in-depth with what happens during these phases.

The reason why these phases exist is because it will allow soldiers to move onto the next one when they have successfully passed their test.

Towards the end of each phase, trainees will be tested on what they’ve learned so far in training.

“Week Zero” and Week One

This is where it all begins. “Zero Week” is what happens prior to the beginning of the red phase.

At this point, you will be given immunizations, physical exams, complete necessary paperwork for the enlisting process, and other in-processing tasks.

You will likely undergo a drug test to ensure that you are free of any drugs or illicit substances.

A positive test will be grounds for discharge from the United States Army.

After your processing is complete, the beginning of the Red Phase starts in week one.

Here, you will learn of the Army’s Core Values, traditions, and ethics.

And you’ll also be issued an M16, which will be your best friend throughout the training (and even in the combat field when the situation arises).

You will learn how to properly disassemble, maintain, and assemble your rifle.

A good soldier is someone who knows their rifle like the back of their hand. You will also take part in the first of a handful of regular PT sessions.

These PT evaluations will see where you stand in terms of physical fitness.

Remember, you will be evaluated on a regular basis up until your final evaluation towards graduation.

On the third day of week one, you’ll learn basic drills and marching.

Aside from your fitness evaluations, you will often be tested on your knowledge of basic drills and marches.

For the last three days of the week, it will mostly be classroom time where you’ll learn everything from the Army’s Core Values, ethics, and more.

You will learn various hand-to-hand combat exercises that will be useful in close quarter battles.

On day two, you will ascend the victory tower and put your mental and physical abilities to the test.

You will also learn first aid training so you can care for yourself and your fellow soldiers in the event of medical emergencies.

You’ll learn map reading and land navigation, which will be a must-have skill when you are operating behind enemy lines.

The final week of Phase Red will feature more combat training. You will learn how to use a bayonet, a useful weapon in close quarter attacks.

After learning those skills, you’ll go through the assault course using the bayonet.

You’ll also take part in nuclear, biological, and chemical (NBC) training. And you’ll get to spend a little bit of time in the “gas chamber”.

Of course, there is no better way to approach the end of the Red Phase with a trip around the obstacle course.

Near the end, you will also receive your first phase test.

You’ll be tested on the skills you’ve learned during the phase (which will be the same towards the end of every phase you go through).

If you pass, you move on.

This week begins the first of two weeks of the white phase. The week begins with an 8 kilometer foot march and more marksmanship training.

At this point, you should be comfortable with using your rifle and being able to take the best care of it.

Throughout much of this week, it will be focused on marksmanship.

This will give you plenty of quality time to build an appreciation and respect for your weapon.

The final week of the white phase will have two days of BRM pre-qualification followed by a qualification day.

Towards the end of the week, you will be tested for what you’ve learned so far in the white phase.

This week marks the beginning of the final phase. The first day of the week will be another evaluation of your physical fitness.

You’ll also learn and familiarize yourself with the weapons being used by the US Army.

You’ll also be working on buddy exercises such as the buddy movement techniques and squad defensive live-fire exercises.

Week Seven will help you build the confidence you need in becoming a soldier. Especially if you are in a combat situation.

You’ll learn how to recognize threats and neutralize them properly.

The week ends with trainees running through the confidence course.

The name itself is intended to test their confidence through mental and physical challenges.

It’s a great morale booster for everyone and you and your fellow soldiers in the making will encourage each other to push through.

Victory Forge is the name. And you will be taking part in two foot marches. One will be 10km and the other will be 15km.

You’ll also take part in activities such as the drill and competition ceremony and the night infiltration course.

The last three days will be dedicated to personal time and rest.

The final week is here. This includes an inspection, out-processing, and personal time.

Family day will be the day before graduation.

And finally, the big day where you graduate from basic military training and earn the title of soldier.

You may be graduating from basic training at Fort Benning or Fort Jackson.

With that said, but no matter where you train to become a soldier, you will open and close one chapter of your military career in basic training.

If you are planning on becoming a soldier, you now have a deep understanding of what basic training will be like for ten weeks of your life.

As a soldier, you will have the honor and the duty to serve your country for as long as you want.

The training will be tough for all.

But you’ll come in as a volunteer wondering what you were thinking to a soldier that is mentally sharp, ready to defend America at a moment’s notice, and proud to serve the country you love. 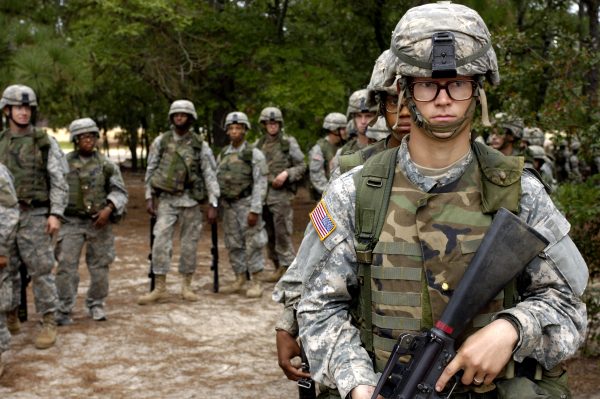 See the Army Basic Training schedule, including details on each phase, and what happens on a week by week basis.