Drones offer many advantages over traditional warfare tactics with the ultimate goal of reducing soldier fatalities.

Though there is plenty of controversy regarding the government use of military drones it is not something that is going away.

Global spending on unmanned aerial vehicles is expected to nearly reach $100 billion in the coming decade.

Learn more about drones the military currently uses and reasons why UAV operators will continue to be in high demand in the future.

Why The Sudden Explosion of Military Drones?

The U.S. government has experimented with advanced weapons that could be used on the battlefield for decades.

Gaining any advantage on the battlefield is fundamental to survival and winning wars.

The most profound innovation in military warfare in the last several decades, if not the last century, is the introduction of unmanned aerial vehicles (UAVs).

Unmanned aerial vehicles, or drones, have powerful capabilities when it comes to surveillance and reconnaissance.

Furthermore, military drones are capable of sending missiles or bombs in drone strikes.

The primary advantage of UAVs is that the device does not need an onboard human pilot.

Consequently, the U.S. Military has relied upon drones for several coordinated attacks that in the past would have required more soldiers on the ground.

The theory is that drones can save military lives yet there are plenty of critics that add they also take innocent lives in the process.

Settling the drone controversy is a subject for another article, so in this one, we will focus on the specific types of UAVs the military currently uses on the battlefield.

The U.S. government is the largest leading in military drone spending with an estimated $2.2 billion currently dedicated to UAVs.

By the end of the decade, the U.S. government currently plans to spend close to $3 Billion on military drones.

It’s also estimated that the government has several more billions in UAV spending that do not get reported because of classified programs.

The use of unmanned aerial vehicles is skyrocketing with no end in sight.

After learning about the military UAVs listed (below) you also may want to consider what it takes to become an operator for the Army or Marines.

The Avenger by General Atomics supports a ground control crew of two members.

The military drone is primarily used by the Air Force.

It is powered by a turbofan engine unlike previous models like the MQ-9 Reaper.

Updates on the Avenger enable it to support internal weapons storage and reduce trails of it being in the air.

After a successful first flight in 2009, the General Atomics Avenger was deployed to Afghanistan.

The AAI RQ-7 Shadow is primarily for the U.S. Army offering reconnaissance and surveillance capabilities.

The UAV is launched from a trailer-mounted catapult and requires arresting gear on an aircraft to recover the device.

Army troops have sought an effective battlefield drone since the cancellation of the Alliant RQ-6 Outrider.

The impressive range of the smaller drone helps support Army operations though it is restricted in bad weather conditions.

The Navy version is known as the X-47B while the original drone is called the X-47A Pegasus.

The U.S. Navy is among the last branches to get on board with incorporating military drones into operations.

Northrop Grumman X-47 is a demonstrater drone after a successful first launch in the early-2000s.

General Atomics MQ-9 Reaper (also called Predator B) is one of the most popular military drones.

The United States Air Force primarily uses the MQ-9 Reaper though it is also used by the Navy, CIA, and NASA.

It is considered the first “hunter-killer UAV” with a design that promotes high altitude and long endurance missions.

The MQ-9 Reaper made headlines in 2008 when it was announced the Air National Guard in New York was beginning a transition from converting F-16 pilot fighters to Mq-9A operators.

There are plans to keep the MQ-9 Reaper in service until the 2030s due to its outstanding and dependable operation.

General Atomics has another offering with the MQ-1 Predator which is primarily used by the Air Force and CIA.

The MQ-1 Predator is one of the original military drones with an initial conception in the early 1990s.

The military set out to produce an aerial reconnaissance UAV with high powered cameras and other sensors.

A final design is so effective that the MQ-1 Predator has seen combat in Afghanistan, Pakistan, Iraq, Serbia, Yemen, Syria, and Somalia.

The drone is considered a “Tier II” MALE UAS which means it provides medium-altitude, long-endurance capabilities.

It was retired in 2018 after years of service with the MQ-9 Reaper taking over several of its former operations.

The U.S. Navy embraced the design of the MQ-8 Fire Scout after initially not being blown away by early versions.

It features a four-blade main rotor different from the RQ-8A UAV.

The military drone is capable of surveying an impressive 40,000 square miles of terrain each day.

To put it in perspective that is the area of Iceland or South Korea.

The RQ-11 Raven is a short distance and slow-moving military drone yet it offers several advantages based on its sleek and unassuming design.

Several branches of the military use the RQ-11 Raven including the Air Force and Marine Corps.

It is launched by hand and powered with a pusher configuration electric motor.

The Raven UAV is a fitting company-level device with cruise speeds between 30-60 mph.

Another lightweight and simple drone is the RQ-12 Wasp.

The miniature UAV has the tiny dimensions of a little over one foot long by two feet wide.

It offers two onboard cameras delivering real-time intelligence to the operator.

AeroVironment RQ-20 Puma is a small, compact UAV that is battery powered.

The military drone is hand-launched with a small range of a little under ten miles in distance.

The compact UAV is for surveillance and intelligence gathering thanks to its infrared and electro-optical camera.

Army, Marine, and Air Force operations all depend on the RQ-20 Puma for surveillance.

It is able to operate even in extreme weather conditions which adds value to the UAV.

Boeing Insitu RQ-21 Blackjack, also known as the Integrator, is for the U.S. Navy.

The small drone offers a twin-boom, single-engine monoplane for operation.

It is relatively new having taken its first flight in 2012.

The RQ-21 Blackjack got selected by the Marine Corps over other military drones at the time competing for the attention of the branch.

Its forward reconnaissance capabilities is instrumental to Marine operations.

The Lockheed Martin RQ-170 Sentinel is for the Air Force and CIA.

Unfortunately, there are not many details regarding the design or specifications of the RQ-170 Sentinel.

The information remains confidential since the UAV is stealth aircraft fitted with aerial reconnaissance equipment.

Experts say the RQ-170 Sentinel is comparable to the RQ-3 DarkStar and Polecat versions.

The military drone does not carry weapons making it exclusively used for stealth operations.

Military drones serve an increasingly important role on the battlefield.

The U.S. government is reducing fewer ground troops (and ideally saving more lives) by implementing UAVs in the line of fire as opposed to ‘boots on the ground’.

The future of military operations seems destined to get fought with machines like drones instead of human lives.

Do you think that’s a good or bad thing? What is your personal take on using UAVs for military operations, including launching drone strikes? 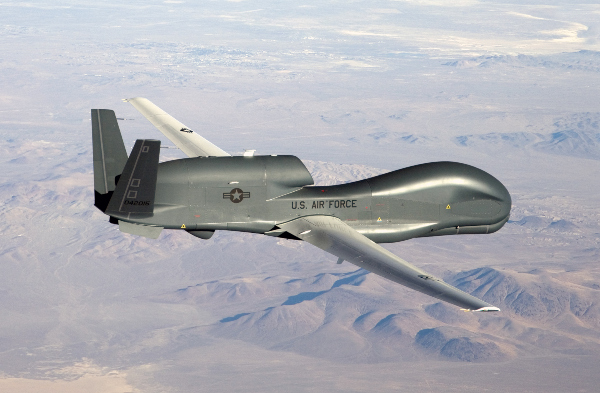 Learn more about the various drones and UAV's used by the US military, including their specs, cost, first flight, and much more.