Military personnel must follow standardized regulations for appearance to project a professional and unified image when in uniform.

Men in the Armed Forces are required to have short haircut styles for low maintenance, practicality, and cleanliness.

Short hair is also less likely to be caught by weapons, helmets, or even the hands of an enemy.

Here are 20 options for military haircut styles for 2022.

The brush cut with fade works with different hair types. The hair on top of the head must be shorter than 2 inches and the sides are cut very short, similar to the flat top style.

The fade is created so the hair along the sides and back of the head end at the natural hairline.

The hair is gradually tapered down until the sides and bottom of the hairline are reached.

A burr cut is similar to the induction haircut in terms of hair length. This is a uniform clipper cut, typically with a guard size of 1 or 2.

All the hair around the head is cut to the same length and it is easy to care for and manage this haircut.

A butch cut is similar to a burr cut in that all the hair around the head is cut to the same length.

However, this style is a bit of a longer uniform clipper cut, with a typical guard size of 3, 4, or 5.

The buzz cut has become a military standard since World War II, but it was a common haircut for American troops well before then.

Traditionally, a buzz cut refers to clippers applied to all hair on the entire head, typically with no guard.

Buzz cuts can be performed with low clipper guards, but the hair is still cut to be the same length all over.

The buzz cut became part of induction into the U.S. military. This is where the “induction” haircut originated.

The crew cut is considered a conservative, short, and classic hairstyle. With this haircut, the top of the hair is faded from the front to the crown.

This leaves slightly longer hair in the front. The sides and back are typically cut to a uniform length with a clipper guard number between 2 and 4.

The nape is usually tapered.

The crew cut was popularized by troops during World War II and it continues to be a common choice for military haircuts today.

This hairstyle is associated with athleticism and patriotism.

The dramatic undercut style is considered more modern than many military haircuts.

It differs from other cuts, such as the regulation haircut, due to the lack of a fade.

This creates a contrast between the extremely short hair at the sides and back and the longer hair on top.

The flat top cut gets its name from its appearance. When the hair is brushed up, it forms a straight, flat surface on the top of the head.

The sides and back of the hair are tapered for a flat top cut.

A square finish of the hair at the edges of a flat top creates a “boxy” look.

If the hair at the edges is finished by rounding off, the flat top look is a bit softer.

This creates a beveled look or rounded flat top.

The high and tight haircut may be the most recognizable as a military hairstyle, and the U.S. Marines in particular.

This is a type of fade haircut with a hard edge between the top hair and faded sides and back.

The back and sides of the head are cut with clippers using guard number 1 or no guard at all.

The clipper cut begins above the temples, indicating the “high” aspect of the cut. The closeness of the fade indicates the “tight” element of its name.

The hair on top is a bit longer, going straight around the crown to the front hairline, similar to an oval shape.

The top hair is cut to an even length with a guard size from 2 to 5, and this patch of hair is sometimes called a “landing strip.”

The high fade haircut consists of a strongly tapered fade.

This style is achieved by tapering the hair quickly until approximately 1 to 2 inches above the bottom of the hairline is reached.

At this point, a low guard clipper would be used to finish the cut.

Recruits receive an induction haircut at boot camp. With this haircut, the whole head of hair is cut by a clipper without a guard.

This leaves the head with just stubble. There are other terms for this haircut, including a “mighty fine,” “on the floor,” or “Army’s number one haircut.”

Though the induction cut may seem severe, it serves dual purposes.

Practically, it greatly reduces the likelihood of head lice within close quarters and barracks.

Psychologically, it presents a look of uniformity and equality among recruits, which can influence their cohesive spirit.

After graduation from boot camp / training, troops can choose a different regulation-approved haircut.

Related Article – Why Do They Shave Your Head In The Military?

The Ivy League haircut derives its name from its popularity among students of the 1950s attending Ivy League universities and preferring a conservative, neat hairstyle.

This is considered a classic haircut with the back and sides being shorter than the top. It is similar to a crew cut but a slightly longer version.

The Ivy League is considered a graduated cut with the top done by scissors to leave a bit of length.

Then the back and sides are tapered and finished with a fade.

The length on top allows for more styling options, making this a continued popular choice for a military haircut.

A long buzz cut fade haircut leaves the hair a bit longer at the top. A fade is created with hair clippers set to middle guard numbers.

A low fade would be a cut in between a regular fade and high fade.

With a low fade haircut, the hair is tapered until approximately between one-half to one inch above the bottom of the hairline.

Like the military, most law enforcement personnel must meet regulation standards which includes their hairstyle.

The police officer haircut is approved for the military as well.

Essentially, this cut consists of a short crew cut with a high bald fade.

The term for this haircut doesn’t refer to general military regulation or standard.

Rather, it is a specific haircut in which the hair on top is left a bit longer, so there is a clear definition between the top and the back and sides which are tapered sharply.

With a regulation cut, the hair on the sides and back of the head are cut closely or even shaved.

This leaves a visible scalp, which is known as a “whitewall.” Then the hair is neatly parted on the side to create a straight line from front to back.

There are variations of this haircut determined by the “height” of the whitewall:

The shaved sides and short hair on top cut is similar to the induction haircut except that the hair on the head is not uniformly cut all over.

A short comb over and low fade haircut consists of longer hair at the top with a clean part to the side.

The fade starts lower on the head for the sides and back.

#18. Side Swept with Shaved Undercut

The side swept with shaved undercut style is similar to the dramatic undercut hairstyle.

The top hair is longer with the hair at the sides and back of the head shaved.

The hair on top is cleanly parted and swept / styled to the side. 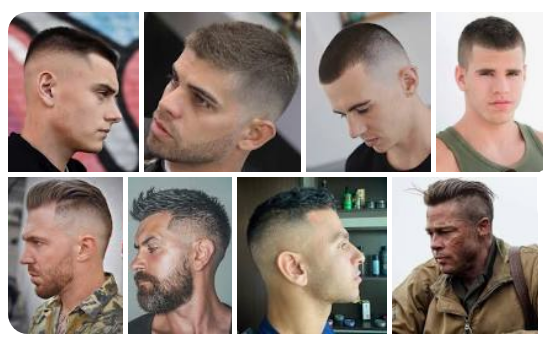 If you're looking for the best military hairstyles for 2022, consider these 18 hairstyles.