What is a typical salary for military pilots?

The question is commonly asked when people are considering becoming a pilot in the military.

There are numerous careers in the military, and becoming a pilot is considered one of the most prestigious.

Military pilots not only get to fly the most advanced aircraft in the world, but earn a good salary doing so.

As a result, learn more about a military pilots salary, including additional forms of compensation you may not be aware exists:

It’s important to understand how a military salary works because it’s not the same in the civilian world.

Personal salaries are generally kept private in the civilian world whereas in the military, everything is transparent and begins with rank.

For this reason, military pilots are not paid according to job title or responsibilities but, rather, determined by a basic pay scale model.

However, your military rank is not the only factor which determines a pilot’s salary.

The longer you serve, the more you earn as a military pilot.

Furthermore, the higher the rank the better pay which often motivates military personnel to seek promotions.

Then, there are also special bonuses and military benefits to factor into the yearly salary.

What is the average salary for a military pilot in 2023?

As previously mentioned, the pay is highly contingent on several factors.

Time in service, your rank, and bonuses can all factor into the ultimate take home pay for your average military pilot.

Notwithstanding, the average base salary for a military pilot is $89,700 per year.

Of course, the base salary increases when you factor in other benefits.

As a result, a pilot’s salary can also be determined by education, certifications, experience, and other factors.

Accordingly, it’s not uncommon to earn 6 figures as a military pilot, especially after gaining some flight experience.

Nonetheless, to find out precisely what you’ll make, it’s important to know about the various types of pay that factor into a salary.

The salary for military pilots is not straightforward.

The precise amount you’ll earn is dependent on numerous factors, including the types of pay you receive:

The base pay is determined by military rank as well as number of years in service.

It’s universal across all service branches and thus not intended to place the value on one military profession over another.

At first, flight pay is not much yet can increase to over $1k a month by the time you leave service.

Moreover, serving the military provides other incentives such as money for food, housing, and other expenses.

These allowances are tax exempt and usually calculated by location, pay grade, and other factors.

For example, the Basic Allowance for Housing (BAH) is determined by zip code, military rank, and number of dependents (if applicable).

Benefits of Joining the Military

Additionally, there are numerous benefits to joining the military.

For starters, military service includes health care coverage along with a retirement plan.

Moreover, service members may continue their education or take advantage of the Post 9/11 G.I. Bill after leaving the military.

What’s fantastic about the G.I. Bill is you don’t have to attend college to use it.

For example, you may redirect the funds toward costs for flight training, vocational training, or other flight programs.

Furthermore, you may also elect to transfer remaining funds from the Post 9/11 G.I. Bill to a military spouse or dependent.

The military benefits you can expect to receive as a pilot, include:

Finally, serving in the military entitled you to hundreds of discounts at retailers, restaurants, and for travel expenses.

Did you know that pilots are required to be officers in the military?

It allows you to earn a higher military salary, but also means more requirements and responsibilities to become a pilot.

Accordingly, you can discover what it takes to become a pilot in the Air Force or U.S. Navy by reviewing eligibility requirements.

There are also pilots in the Air National Guard and U.S. Air Force Reserve.

The other requirements vary depending on military branch.

Regardless, expect to have to complete several physical and psychological evaluations, along with an officer training program and flight school.

In general, pilot salaries are pretty close across all branches of the military.

Pilots in the Air Force, Navy, and Marine Corps are commissioned officers that earn the same pay depending on military rank and years of service.

With that said, military pilots salary also becomes variable depending on special pay, allowances, and bonuses.

Learn more about military pilots salary based on service branch:

Air Force pilots earn their compensation based on a pay scale.

Entry level officers (O-1) are referred to as a Second Lieutenant, like in the U.S. Army and Marine Corps.

Commissioned officers receive pay based on rank and time in service.

While poor performance may prevent officers from getting promoted, in general, moving up rank is more than plausible.

As such, it’s possible to continue and earn a higher salary as you make a career out of the military.

Meanwhile, the Air Force Reserve also trains pilots and it’s anticipated that Space Force will have its own division soon.

Naval officers also receive pay each month based on military rank and experience.

Officers in the U.S. Navy are divided based on the following ranks:

Additionally, Ensigns (or the entry-level rank of a Navy officer) may qualify for other allowances and special pay.

Are you conflicted between joining the U.S. Navy or Air Force as a pilot?

Compare the similarities and differences between a Navy and Air Force pilot.

The U.S. Coast Guard has some really qualified and talented pilots in its own right.

These pilots must navigate difficult conditions, including the ability to fly in all types of weather.

And, like the other military branches, the salary is first determined by rank and military service.

Nonetheless, the Coast Guard also invests heavily in its pilots and does everything possible to retain them after their initial 11 year commitment.

For this reason, you may qualify for a significant retention bonus when it comes time to reenlist.

USCG pilots (who start out as Ensigns) earn 2 monthly amounts which is related to their aviator status.

Accordingly, the Aviator Careers Incentive Pay (ACIP) is significant once you gain some flight experience.

Pilots in the Marine Corps (USMC) begin with the rank of Second Lieutenant, like USAF pilots.

These officers earn pay which is predetermined by the USMC pay scale.

Service members in the Marine Corps generally have a window in which they must get promoted to the next rank, or leave service.

It’s because the Marine Corps, like other service branches, is required to only have a certain number of service members at each rank.

Accordingly, it presents the opportunity to progress up the ranks and earn a higher salary, as a result.

Military pilots in the USMC have a few different pathways they can consider to becoming an officer:

Furthermore, Marines have the ability to receive higher pay through bonuses and allowances.

The Army has pilots as well yet these individuals are classified as Warrant Officers, which is technically under the rank of a commissioned officer.

The reason for this is Army helicopter pilots are designated as officers by warrant (or, in other words, having a specialty) compared to earning the position by commission.

For this reason, Army pilots earn a lower salary compared to pilots in the other military branches.

Meanwhile, it’s also possible to join the Air National Guard as a pilot.

Your career as a pilot does not have to end with military service.

In fact, most military pilots eventually leave the military and find a rewarding career in the civilian world.

The good news is that former military pilots can find a wealth of available jobs.

It’s true that private companies like to hire military pilots thanks to their unrivaled experience and training.

Moreover, former military pilots are usually seasoned and cool under pressure thanks to their time in service.

For this reason, military pilots should consider the following careers:

Former military pilots have the option of working for the U.S. government or a state/local jurisdiction.

Additionally, corporations and other entities offer the best opportunities for high compensation.

Here are some frequently asked questions regarding the salary for military pilots:

What is military pilots salary for 2023?

There are several factors which determines precisely how much you’ll earn in the military.

Thus, a typical entry-level O-1 Ensign / Second Lieutenant can anticipate earning between $3,470 and $4,375 per month.

Of course, monthly pay increases when you factor in flight pay, hazardous pay, and other bonuses.

These salaries also cover the earnings for drone pilots, which is currently in high demand.

What are the highest paying cities / states for military pilots?

There are some places that pay better than others for pilots.

As previously mentioned, your base salary is determined by military rank and years of service.

However, your location may also factor into earnings, especially in terms of BAH and for civilian employment.

How do you calculate a military pilots salary?

First, the pilots salary is determined by military rank and years of service.

Meanwhile, allowances are tax exempt and also contribute to the salary of a military pilot.

Lastly, there are also military benefits and hazardous pay that are factored into the salary.

How much do fighter pilots make?

The amount you earn as a pilot in the military depends on several factors.

First, basic military pay is universal across all service branches and is calculated based on rank and years of service.

Then, other types of special pay and bonuses contribute to the high earnings of a military pilot.

As such, it’s not uncommon for military pilots to earn 6 figures after developing some experience and moving up the ranks.

Despite the risks and dangers, it’s well worth considering a career in the military as a pilot because of the higher than average earnings. 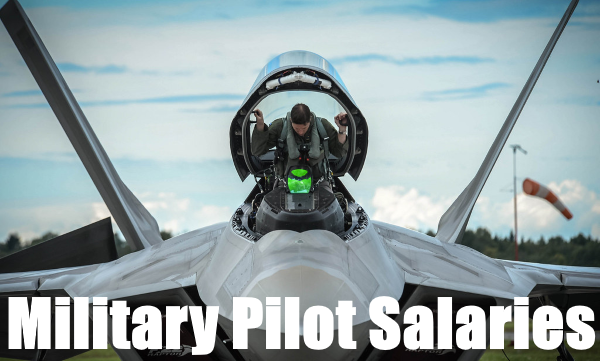