What is the military pistol used in each service branch?

The answer depends on the time period and other factors.

However, in the past, the arsenal of military pistols was much more diverse and varied by branch.

Learn more about what pistol each military branch uses (past and present).

What Military Pistol Each Branch Uses?

The U.S. Armed Forces uses pistols (handguns), shotguns, rifles, and machine guns as part of its arsenal of firearms.

The military pistol is life-saving in many situations where it may become a last resort for a solider.

Furthermore, handguns provide service members with a practical means to defend themselves.

Often, assault rifles and machine guns are only necessary in combat roles.

For this reason, there is a long history regarding the military pistol (more information, below).

Currently, the U.S. Armed Forces primarily defines the Sig Sauer M17 as its sidearm of choice.

However, in the past, various other military pistols have been used by the different service branches, including:

Since 2017, the Department of Defense (DoD) has distributed more than 100,000 Sig Sauer M17 and M18 handguns to military personnel.

However, it’s merely the latest chapter in the legendary history of the military pistol.

In fact, the iconic history of these sidearms traces its roots back to the American Revolution.

History of the Military Pistol

The military pistol has made a long and historic journey with the Armed Forces that begins with the original, Continental Army.

The Continental Army first incorporated Flintlock pistols into warfare against the Redcoats during the American Revolutionary War.

Most of these weapons were privately owned by members of the militia while Officers could afford more expensive, reliable versions.

Accordingly, the array of Flintlocks varied considerably in caliber and quality.

For this reason, the Continental Congress designated the Model 1760 Flintlock as its standard-issue military pistol.

The Model 1760 was a direct replica of the British model and featured versions like the .62-caliber smooth bore single-shot flintlock.

It would remain the U.S. Army standard-issue military pistol for more than 50 years.

Then, the Colt revolvers took over for much of the 19th century.

These powerful handguns revolutionized warfare by discharging six bullets without the need to reload.

Moreover, the precision caps on the pistols allowed shooters to perform well in any weather condition.

The Colt 1947, or “The Walker”, was the first mass-produced military pistol designed for service.

It assisted soldiers during the Mexican-American War as well as the American Civil War.

The most popular Colt revolver – the Colt 1860 – was produced until the late 19th century.

Nevertheless, by the beginning of the 20th century, it was time for the M19 to take over.

The single-action, semi-automatic military pistol was designed by John Browning.

The Colt M1911 was capable of unloading 7 rounds from a magazine and was issued to all branches of the U.S. military.

First and Second World War service members depended on it along with those that were stationed in Korea and Vietnam.

The military pistol was still reliable for troops during the Grenada Invasion of 1983.

However, the handgun was replaced a couple of years later by the Beretta M9.

The small, lightweight M9 pistol was adopted into all military branches and had a decent 30 year run.

Ultimately, the Department of Defense settled with the Sig Sauer M17 and M18 as its next standard-issue military pistol.

Learn more about what each service branch uses as its current military pistol (as well as previous versions), below:

The U.S. Army currently utilizes the Sig Sauer M17 and M18 as its standard-issue sidearm.

The Army was the first military branch to adopt the M17 and M18 into its arsenal.

Later, the U.S. Air Force and Marine Corps would follow the same direction in 2019.

It’s reported that the Pentagon plans to purchase more than 400,000 of the modern handgun.

Additionally, there is a shorter-length carry model (98 mm) available referred to as the M18 military pistol.

The M17 and M18 handguns officially replaced the Beretta M9 as the standard-issue pistol of the U.S. Army in 2017.

It is also much more effective in close-quarters combat compared to the M9 pistol.

The United States Air Force also elected to designate the M17 as its standard-issue military pistol.

However, the M9 handgun is still used in a limited capacity.

Previously, the Air Force preferred the Beretta M9 for its lightweight design and 15 round magazine.

It saw combat during the Gulf Wars as well as War on Terror in Afghanistan.

Notwithstanding, the M9 was not sufficient in many close-combat situations and also notorious for being unreliable.

Still, the interchangeable parts and accuracy from 50 yards made the M9 popular in Air Force Recruit Training.

Today, few enlisted members of the Air Force are required to carry a military pistol (even in combat).

The Coast Guard (USCG) is the only military branch that has a different standard-issue handgun from the M17.

Instead, the USCG prefers the Sig Sauer P229 DAK pistol.

The reason for this is the Coast Guard belongs to the Department of Homeland Security, not the DoD like the other military branches.

Therefore, the Coast Guard prefers a different military pistol based on the operations and situations the service branch encounters.

The P229 DAK is a compact, double-action pistol that only weighs 6.5 lbs.

Another notable feature of the sidearm is the ability to quickly disassemble for cleaning purposes.

Furthermore, you may see these pistols also used in the U.S. Coast Guard:

The P11 is especially unique with the capabilities to fire rocket-propelled darts underwater.

The Marine Corps (USMC) followed the Army and Air Force into adopting the M18 pistol in 2019.

Previously, the military branch had relied on the Beretta M9 pistol.

Additionally, the Marine Corps was also a fan of the Colt M19 (which is still used in limited capacity).

The U.S. Navy has followed the tradition of other military branches in regards to a standard-issue sidearm.

The military pistol is magazine-fed, recoil-operated, and single-action.

There are other instances where the shorter length M18 is assigned on ships.

The U.S. Space Force is still very new and much is unknown about the direction of the military branch.

For now, Space Force largely follows the same procedure and guidelines as the U.S. Air Force.

Did you know that in combat it’s the tradition that only officers carry handguns?

However, there are 2 exceptions:

Special Ops rely on sidearms in a variety of situations, including close combat.

For this reason, some of the most popular military pistols are the Sig Sauer P226, Glock 19, Makarov PM, and CZ 75.

Moreover, some operators prefer the Beretta 92 or Colt M1911.

You may also find these military pistols in limited service:

Learn about the weapons and gear of Delta Force.

The Sig Sauer M17 has evolved into the standard-issue sidearm of the U.S. Armed Forces.

The M17 performed well in competitions designed to promote the next generation military pistol of the Armed Forces.

As a result, the M17 and M18 pistols have largely replaced the Beretta M9.

Previously, the M9 and Colt M1911 were popular handguns among military personnel.

The history of military pistols originates with the Continental Army which utilized the sidearms in victories over the Redcoats.

It’s interesting to discover how military weapons have transformed over the decades, including what each military branch prefers.

In general, the Sig Sauer M17 is the standard-issue of each branch outside the Coast Guard.

The U.S. Coast Guard (managed by the Department of Homeland Security) designates the P229 DAK pistol its standard-issue sidearm. 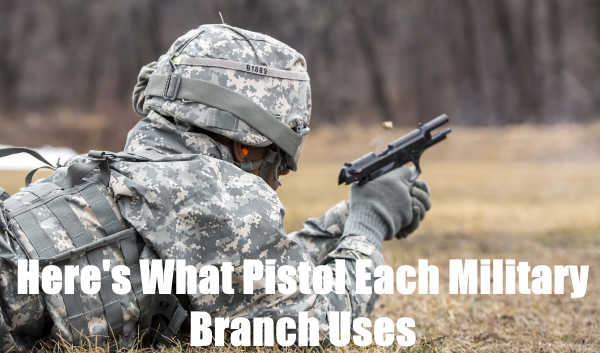 The military pistol each service branch uses depends on the era. Review some of the most iconic sidearms in U.S. Forces history.