The United States Air Force Basic Training is eight and a half weeks of physical and mental preparation for those who enlist to become an airman.

The training takes place at Lackland Air Force Base in San Antonio, Texas.

This write-up will give you a detailed explanation of the Air Force Basic Training Schedule, and what happens on a week by week basis.

If you are someone who is planning on enlisting in the Air Force or in the Delayed Entry Program (DEP) and waiting for your time to ship out, this is something you want to pay attention to.

If you are the parent or spouse of an enlistee, you’ll get a good idea of what they’ll go through during their time at BMT.

In either case, keep reading.

As you embark on a journey becoming one of the countless men and women in the United States Air Force, it’s good to know a few things ahead of time.

Related Article – What To Bring To Air Force Boot Camp

Unlike the Army and Marines basic training, the Air Force doesn’t have phases. But what they do have is what is known as “Zero Week”.

We’ll be taking a look at what happens during this week so you know what to do when you’re settling in.

This part is pretty self-explanatory. In-processing is the part of BMT where you undergo a drug test.

Even the slightest evidence of drug use will be detected on a urinalysis.

If you fail the test, you will be discharged from the Air Force without the ability to return in the future.

During this processing phase, you will be issued a Military ID card and the necessary paperwork that will formally allow you to enlist in the United States Air Force.

At the same time, you’ll also receive immunization shots to protect you from various diseases and illnesses.

Also, you’ll need to fill out paperwork ensuring that you receive pay while you are in basic training.

Be sure it’s tied to an account that you’ll be able to use. At some point, you’ll need to purchase basic items from the commissary or base exchange (BX).

Males will receive haircuts for sanitary purposes. Keep in mind that your hair will grow out during the rest of your basic training.

But let’s just say there’s a good chance you might get down and dirty during your physical portions of BMT.

Lastly, you will be issued basic military clothing.

These include your clothes for PT and other in-field activities such as basic drills and marching.

One last thing, you will learn the Basic Code of Conduct during your in-processing.

Your training instructor (TI) will also go over any legal information that you will need to abide by in accordance with the Universal Code of Military Justice (UCMJ).

There are other things that the new trainees will be able to do such as call home to let their family know they’ve made it, mentally preparing themselves for the weeks ahead, and quickly get to know the members of their flight.

As part of zero week, you’ll be assigned a flight and a dormitory.

Once you have settled in, your TI will go over basic marching and drill movements.

You will need to pay attention and follow along when instructed.

You will learn marches such as “forward march”, “mark time”, and orders such as “halt”.

One thing you want to remember is all your marches start with your left foot (no wonder why you hear “left…left…left, right, left all the time).

Drill movements will need to be executed by specific commands.

For example, you’ll learn things like “parade rest”, “about face”, and other basic drills.

These will be used for ceremonies, parades, and all throughout your time in BMT.

Now that Zero Week has passed, this is where things get to step up a notch. In this week of the Air Force Basic Training schedule, you’ll be able to receive your initial medical and dental examinations.

You’ll also learn the basics of reporting and saluting.

You’ll also learn entry control procedures. This will come in handy if you are responsible for determining who enters the dormitory and who is not allowed.

Typically an MTI will request entry into the dormitory and you as an entry controller must recite the procedure such as requesting the proper identification.

Once identification is verified, you will grant entry to the authorized individuals such as your TIs and flight members.

For more information on these procedures, refer to the video below on how to properly follow them:

You’ll also learn basic individual drills, recognition of Air Force ranks and insignia, be issued your weapon and learn how to maintain it.

You will also undergo your first round of physical training or PT.

During this week, you’ll be delving into a lot of the learning aspect of the United States Air Force.

You’ll be able to learn about the history of the USAF, career guidance, basic situational awareness, and how the Air Force is organized among all other things.

It may sound overwhelming at first (and a lot to cram in), but you’ll have the whole week to learn so much.

Of course, some of the tasks will be the same every week including physical training and drill practice.

Also, you’ll learn how to keep a professional appearance while you are in uniform.

The United States Air Force expects nothing less than perfection (or any branch for that matter). You are to be well-groomed, clean, and organized in the way you present yourself.

In week three, you’ll learn about self-aid and buddy care.

This will show you the basics of first aid and medical emergencies in the event if they happen to you or someone in your flight.

You will learn life-saving techniques that will come in handy at any given moment.

You will also undergo personal interviews based on what your plans are while in the Air Force and what could be your life outside of it.

You’ll also learn mental preparations for combat, leadership skills, take part in a formal retreat, and be part of flight pictures (which is kind of like the class pictures you had in school).

You will also be issued a second set of uniforms.

Specifically, you’ll be issued your dress blues. This is the uniform you will be wearing during your graduation from BMT.

This is where the real fun begins. Week four will introduce you to none other than the BMT Obstacle Course.

This is where you get to put your physical and mental skills to the test.

You will also learn basics regarding anti-terrorism and force protection.

This will come in handy in the event of any terroristic activity or any acts of violence against members of the military occurring on base.

You’ll also learn security training and also be trained in what you need to do in the event of any nuclear, biological, and chemical weapons attacks.

Also, you’ll also be immersing yourself into more classes regarding financial readiness, how to report incidents of rape and sexual assault, and other need to know skills.

Week five will show you how to mentally prep for combat. Speaking of combat, you’ll also learn how to use your rifle to your advantage.

That’s because you’ll be shooting off rounds at targets to improve your marksmanship.

Other than that, you’ll continue to work on your marching and ceremonial drills. There will be progress checks throughout your time in BMT.

And this is one of those weeks where it will happen.

So be sure to brush up and stay sharp on basic drills and marching. A TI will not be happy if you mess up in the slightest.

Make sure everything is on point so you can perform the drill on command.

Six down, two to go. You’ll be briefed on MREs (or Meals Ready To Eat).

They may not be the best, but they will certainly nourish you whenever you are out in the field.

You’ll also go through the tactical assault course. This course is designed to put your defensive skills to the test using your weapon.

This is one of the closest that you can get to some real combat training.

You will also watch a video on the Code of Conduct so you get a basic understanding and go a little deeper on how it works.

You will be following this all throughout your time in the military.

Next, there is deployment processing which will let you know where you will be once you have finished your training.

This includes your tech school and your first base assignment.

Lastly, you will be issued more equipment that will be used throughout the final stretch of BMT.

Your final classes will include military citizenship and ethics.

The Air Force is a big believer in integrity and they will make sure you are ethical and model yourself as a true citizen in the United States Military.

You will also learn about the history and the organization of the Air Force. For the physical part of the training, you will be evaluated one last time.

And you’ll also learn about how to properly use your 9mm pistol for self-defense purposes.

You’ll also learn about combat stress recovery and how to handle stress after a combat situation.

Lastly, environmental awareness will teach you the environmental impacts of your service in the military and ensuring that you perform your tasks while abiding by the laws and regulations set forth by the United States government related to the environment.

The final week. You will receive your Airman’s coin and be briefed on your tech school.

You’ll also get a departing brief from the Commander of Lackland AFB.

You’ll also receive a Town Pass briefing, which allows you to explore the San Antonio area with your fellow airmen and even members of your family.

And last but not least, the graduation ceremony itself.

Air Force BMT will be a challenge both physically and mentally.

But it will mold you into becoming one of the many Airmen that serve this country every day.

Now that you have the full schedule in your mind, you’ll know exactly what to expect during your time there.

In the meantime, do your best to stay in top physical and mental condition so you are prepared to take on the challenges ahead. 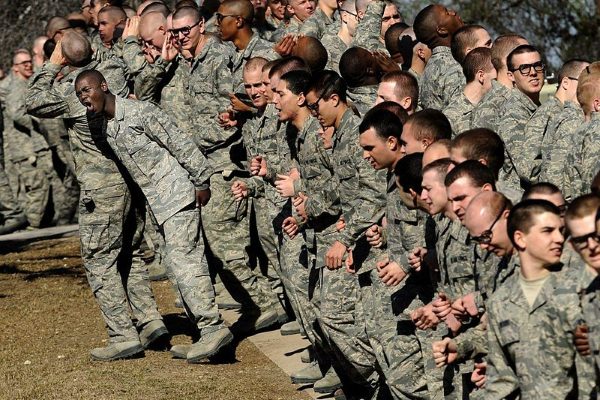 Get the details for US Air Force Basic training schedule, including what happens on a week-to-week and day-to-day basis.