While there are not many military schools in Maryland compared to other states it is still home to one of the most famous – the United States Naval Academy.

The location of the U.S. Naval Academy in Annapolis helps make Maryland one of the more desirable places to attend military school.

The United States Naval Academy is part of the federal services academies which also includes one at West Point (for the U.S. Army) and Colorado Springs (for the U.S. Air Force).

Additionally, the state has a few limited options when searching for military prep schools.

While the acclaimed Forestville Military Academy closed its doors in 2016, young students still have the option of applying for Leonard Hall Junior Naval Academy.

Learn more about the best military schools in Maryland based on prestige, reputation, academics, and military culture.

Related Article – How To Get Into The US Naval Academy: 5 Challenging Steps

The United States Naval Academy (USNA) is one of most prestigious institutions for higher learning in the country.

As a result, it clearly represents one of the best military schools in Maryland based on its leading education.

The U.S. Naval Academy exists in Annapolis and is the second oldest of the 5 U.S. service academies.

Along with offering one of the most challenging curriculum in the nation, the United States Naval Academy also commissions officers for the Navy and Marine Corps.

The United States Naval Academy is based on a historic 338-acre campus along the confluence of the Severn River and Chesapeake Bay.

The campus exists on the former location of Fort Severn which was critical in obtaining victory during the American Revolutionary War.

All in all, the entire campus is registered as a National Historic Landmark and known affectionately as “The Yard” to Midshipmen.

It is conveniently located less than 35 miles east of Washington, D.C. and even closer to Baltimore.

There is tremendous competition to receive admission to Annapolis, just like the other service academies.

In fact, candidates for admission must not only meet a series of qualifications but also earn a nomination from a member of the U.S. Congress.

For this reason, the academy is extremely selective as the entire enrollment on campus is less than 5,000 students with very personal classroom sizes (8:1 student to faculty ratio).

The United States Naval Academy (USNA) is one of the most desirable and competitive schools in the nation.

It is easily the most recognizable among the military schools in Maryland with an outstanding history that dates back more than 175 years.

Every year, the institution reviews thousands of applicants that must meet a series of obligations for serious consideration.

Those with a congressional nomination are among the 1,200 “plebes” that begin training the summer before freshman year.

Plebe Summer is a rigorous program that immediately disqualifies individuals that are unable to survive the academy’s version of basic training.

Consequently, only about 1,000 Midshipmen graduate from the university each year.

Students are officers-in-training with the U.S. Navy and Marine Corps until they graduate and earn the rank of Midshipman.

One of the amazing features of the U.S. Naval Academy is that tuition is free in exchange for a service obligation following graduation.

Therefore, students at the Naval Academy in Annapolis receive one of the finest educations in the nation for the cost of nothing!

Graduates generally join the U.S. Navy as commissioned ensigns or second lieutenants in the Marine Corps.

Moreover, the academy sends a select number of Midshipmen each year to get cross-commissioned as officers in other federal services and with allied nations.

In addition to receive a free education at the U.S. Naval Academy, graduates also report some of the highest paid starting salaries.

There are approximately 500 faculty members that work at the U.S. Naval Academy full-time.

The faculty is divided between civilian professors and military instructors with experience in the field.

The Naval Academy at Annapolis grants a bachelor of science degree that revolves around a curriculum of broad academic performance and military leadership.

Midshipmen are required to participate in competitive athletics like other federal military academies.

Academic departments at the U.S. Naval Academy are structured into 3 divisions:

In addition to academic achievement, the Naval Academy promotes moral and ethical development in all aspects of life.

The Officer Development Program is integrated all 4 years in the education of a student.

Additionally, the military institution teaches the moral values of respecting human dignity, honesty, and property of others.

The U.S. Naval Academy is slightly different from other military institutions in that Midshipmen are allowed to confront someone they notice violating the honor code without formally reporting it.

The military school believes that this method is a more appropriate way for developing honor and personal accountability among Midshipmen.

The United States Navy Academy (USNA) accepts candidates between the ages of 17-23.

Additionally, you cannot be married or with children and must demonstrate strong moral character.

Those that are interested in attending the military academy must go through the standard process of applying and performing well on standardized testing.

There are many other requirements for enrolling in a military academy so it’s important to start planning as early as your freshman/sophomore year of high school.

Furthermore, candidates for admission at the U.S. Naval Academy must complete a physical aptitude test.

It is possible to receive a medical waiver for many conditions so do not be afraid to ask.

The U.S. Naval Academy is a full-time boarding school where students reside and dine on campus.

Moreover, there is no tuition to attend the Naval Academy.

The federal government covers 100% of your education, including room and board, so long as you graduate and complete 5 years of active-duty service following graduation.

It is mandatory that all Midshipmen participate in athletics, even those that are not on scholarship for varsity sports.

The campus offers a wide range of intramural and club sports.

Additionally, students may pursue Brigade Support Activities such as the YP Squadron as a substitute for intramural sports.

The annual Army-Navy college football game is historically one of the most important events each year on the campus.

Navy has recently held a strong advantage over its West Point rival, having won 14 straight against Army leading up to the 2015 season.

Every year, the Commander-in-Chief Trophy is awarded to the service academy (Army, Navy, Air Force) that defeats the other two teams in a college football season.

Midshipmen also have the opportunity to engage in a wide range of other extracurricular activities such as musical performing groups, religious organizations, academic honor societies, and theater.

The intercollegiate debate team is especially esteemed at the Naval Academy.

The U.S. Naval Academy was ranked the #1 public liberal arts college in America during the 2016 edition of U.S. News & World Report.

It is clearly the best military school in Maryland as the Navy Academy consistently ranks among the Top 25 overall in the nation for “America’s Top Colleges”.

It is clearly one of the best military schools in Maryland partly because of small class sizes (6:1 student to teacher ratio) that allows room for personal interaction.

The military preparatory school has over a century of experience which is important in terms of college placement.

As a result, you are far more likely to get noticed receiving your education at a terrific military school like Leonard Hall Junior Naval Academy.

The military school enables an excellent atmosphere for students as they also train to become better leaders.

The discipline and structure of Leonard Hall Junior Naval Academy prepares graduates for the nearby federal academy in Annapolis, or whatever other direction the student decides to pursue.

Young Midshipmen graduate with unparalleled preparation and training for any challenges of adulthood.

Leonard Hall Junior Naval Academy fosters a learning environment that prides itself on being a family.

Students get to know their educators that are genuinely invested in their future.

Leonard Hall Junior Naval Academy is extremely small with a student enrollment of only 35 students.

Consequently, the tiny military school in Maryland generally accepts only a handful of students for each grade level.

Students get the rare opportunity of learning in an atmosphere that usually only includes 5-6 students per educator.

The junior Naval academy specializes in supporting a family atmosphere where students, families, and faculty are closely connected.

The military based curriculum offers many advantages over a standard public education in Maryland.

Furthermore, it can help give you an edge toward receiving admittance to the local Navy Academy in Annapolis.

However, attendance at military prep school is not mandatory to qualify for the federal military academy (instead, focus on grades, community service, and getting a congressional recommendation).

Leonard Hall Junior Naval Academy is the only military prep school in Maryland following the closure of Forestville Military Academy in 2016.

Those that are interested in attending Leonard Hall Junior Naval Academy should contact the school directly for more information.

There is an information packet available along with tuition assistance for families that need to apply for a low-interest loan. 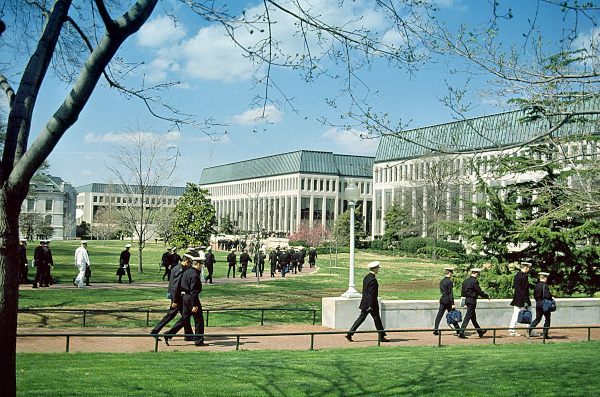 Learn more about the only 2 military school in Maryland, the United States Naval Academy and Leonard Hall Junior Naval Academy.