If you are looking into military schools in New York, there are several fine institutions for consideration.

Military schools have a unique ability to not only focus on academics, but they create a culture of routine and self-discipline that helps students become successful.

The New York Military Academy began as a boy’s school, but the academy became co-ed in 1975.

This option for military schools in New York is a residential school with tuition fees.

Also, there is financial assistance available for those in need.

The mission of the New York Military Academy is to guide cadets into competent members of society.

This is accomplished by focusing on the whole student, not just academics.

Academics are critical. However, there is also a focus on athletics, leadership, and character development.

The academy also has an early college program, so students earn college credits in the last two years of High School.

Before applying, an in-person visit is recommended, but not necessary.

Once the application review is over, the student is invited for an interview before an official acceptance.

There is no minimum GPA necessary for admission, but the New York Military Academy looks for students with leadership qualities, and academic success is considered.

The number of students each year fluctuates, but the school has an impressively low student to teacher ratio.

This ratio means teachers are better able to meet the unique needs of their students.

Also, the graduation rate is 100%, and all students attend either college or go on to the military.

However, far more students go to college instead of joining the service despite being a military school.

The La Salle Institute is a Catholic school preparatory school for both boys and girls. However, the institute just recently opened to girls.

The institute works with students from grades six to their final year of high school, and the institute is a day school and not a boarding school.

La Salle Institute wants students to feel supported and cared for while learning.

There is an understanding that academics are only one part of a student’s growth.

Because the class sizes are small, this is much more possible, so students have a more straightforward academic success path.

The success rate of the graduating students is stellar at the La Salle Institute.

Because the students are college-ready, 100 percent of the graduates receive acceptance to college. Also, many students earn scholarships based on academic merits.

Also, clubs and community service are essential at this option for military schools in New York.

The first step in applying is to visit the school. Next, an application is necessary.

The La Salle Institute does not use an entrance exam for consideration. Instead, the institute looks at how the potential student does academically.

Also, they consider leadership qualities and potential as well as behavior.

However, there is a scholarship exam for students who wish to take it, but it is not required.

Christian Brothers Academy is a college preparatory school that provides a Catholic education for boys.

The academy is a Lasallian institute, which has four principles.

First, a Lasallian school is committed to faith, which is expressed through service to the community.

Also, the education itself is committed to being rigorous with academics.

Furthermore, students’ needs come first, and the community and culture are helpful and kind while meeting those needs.

Lastly, Lasallian tradition means the Christian Brothers Academy is inclusive. This means all sorts of students with a wide range of personal and religious backgrounds are welcome.

The Christian Brothers Academy has a 100 percent graduation rate and enrollment into either a college or university.

Also, over 70 percent of college-bound students who recently graduated receive a scholarship based on their academic success.

Furthermore, the average SAT score for students at the Christian Brothers Academy is 1275.

The steps for admission include an entrance exam.

After the exam, an online application is necessary.

You must also have a letter of recommendation from a middle school teacher as well as any transcripts and standardized test scores from middle school.

This option of military schools in New York is a tuition-based school. However, there is a scholarship program.

When the school opened, most girls’ schools focused on charm and beauty rather than academics, so Emma focused on a rigorous academic program instead.

These days, the Emma Willard School continues the vision by fostering girls into being lifelong learners.

Also, the all-girls school works to build the character, morals, and leadership qualities of all students.

The academic focus at the school is multidisciplinary. Meaning, students do not learn facts in a vacuum.

Instead, they engage in critical thinking that tackles problems that require rigorous learning in more than one subject.

Furthermore, the Emma Willard School believes in instilling a sense of community and personal connection between the students and their communities.

However, the school also instills an appreciation of diversity and inclusion in students.

The Emma Willard School is both a day school and a boarding school.

Also, the graduation rate is 100 percent.

The application process is competitive. Students must apply and participate in an interview.

Also, there is an application fee and an entrance exam.

West Point Military Academy is a four-year Federal service academy committed to educating cadets for their commission into the Army.

Candidates can apply directly to West Point, although you must have a congressional nomination for consideration.

Students are called cadets, and the tuition is free in exchange for an obligation to serve in the Army after graduating.

When cadets get their commission, they are typically second lieutenants.

West Point is the oldest of military schools in New York and the rest of the country.

The academy awards Bachelor of Science degrees, and cadets must participate in competitive athletic sports.

The academy is known to produce Rhodes and Marshall scholars, presidents, and Medal of Honor recipients.

Also, West Point has a successful athletics program with collegiate level, intramurals, of club sorts. The football team, for instance, is known to win national championships.

Related Article – How To Get Into West Point Military Academy

The US Merchant Marine Academy is a federal service academy that focuses on creating leaders to serve in national security, economics, and marine transportation.

The academics at US Merchant Marine Academy are rigorous, and the degrees require more of a commitment to credit hours than other colleges.

Also, students spend a year at sea as part of their degree learning to work on military or commercial vessels.

As well as being a commissioned officer and holding a degree, graduates have a Coast Guard license.

There is no tuition at the US Merchant Marine Academy, but students have a service obligation.

The obligation comes with options, though.

Graduates might work for five years in the maritime industry along with eight years of service in any reserve unit.

The other option is five years of active duty in one of the military branches.

Merchant Marines are essential to the United States because they help with national security.

In fact, if there is a crisis, merchant ships become responsible for delivering supplies to the military at sea or overseas.

Strategically, the Merchant Marines are valuable.

Given how sought-after graduates of US Merchant Marine Academy are privately and publicly, the school is selective.

The US Merchant Marine Academy looks at a candidate’s GPA, SAT or ACT scores, and other aspects of the student’s life. The academy only accepts about 22 out of 100 applicants.

SUNY Maritime College is committed to creating educated leaders for the maritime industry.

The college has core values such as strong academics, leadership, and student-centered learning.

Also, the values of integrity and respect work to develop leaders in a global environment.

SUNY Maritime College has a graduation rate of 75 percent, which means graduating within four years.

Although the retention rate is 86 percent because some students need longer to finish their degrees, typically six years.

By comparison, the average rate for comparable colleges is 45 percent.

The acceptance rate for SUNY Maritime College is close to 70 percent. However, the school becomes more competitive year after year.

You need a strong application for consideration. This school looks at transcripts to ensure four years of English and social studies in High School.

Also, three years of science with a preference for chemistry and physics.

There is an essay portion of the application as well as a necessary letter of recommendation.

The Western New York Maritime Charter School is a public high school with a charter, and it is another military school in New York to consider.

The mission at this school is to be the school of choice for those who wish to have a military career.

Graduates often join the military, but many graduates leave high school with a commission into the military.

The NJROTC also has a mission to instill a sense of citizenship and personal responsibility into the cadets.

Also, the NJROTC works to develop discipline and leadership qualities in cadets to best prepare them for what comes after graduation.

The NJROTC is not a recruiting program, but those who want to continue with a military career have opportunities not available at other schools.

The graduation rate is above 90 percent, which is above the state average.

Before enrolling, prospective students must fill out the application first.

There are several military schools in New York to consider.

Some schools are for those who have not graduated from high school, and others are colleges.

In some cases, the schools encourage military service but do not expect a student to serve.

However, in some colleges, there is an expectation of service in exchange for a tuition-free college experience. 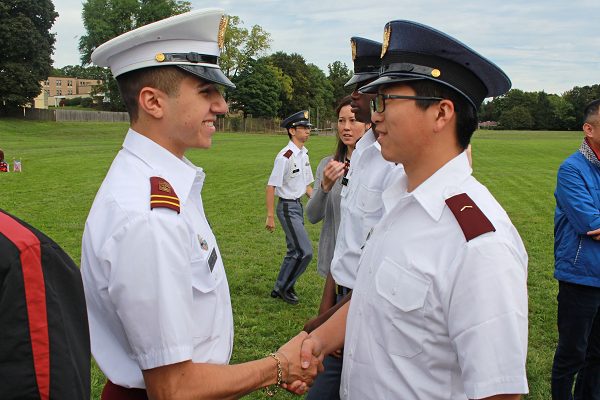 New York is home to 8 major military schools for boys and girls. Learn more about each, including its location, academics, and average yearly tuition.