There are a total of 23 military bases in New York state.

This is one of the few states that houses bases for every branch of the Armed Forces.

The bases here are some of the oldest in the country.

They are still vital in all operations that the D.O.D. does across the globe.

With the immediate access to the ocean, it is an essential location in sea operations.

This is also a training point for Army Corp of Engineers.

Originally was a station for the Nations missile defense system.

Continues to serve as a training and logistics station.

As well as a large Chaplain training and support team that serves all bases of the Army.

The base is home to Army and Navy Reserve units, as well as some active duty units.

At over 107,000 acres in size, it also happens to be the largest military base in New York.

Overall Mission: To provide the New York Area with military support for the Army National Guard and The Army Reserves.

There is a coast artillery station that here that is given the job of protecting that sector of the coast.

This is the home and training ground to 2 Infantry regiments. Because of its location in New York City, Fort Hamilton also happens to be the smallest military base in New York.

Overall Mission: To provide soldiers with the skills they need to succeed in combat.

There is an active Infantry division stationed on this base, but they do also train all branches of the government here.

It is also home to a large Intelligence sector.

Overall Mission: To train men and women to become officers in the United States Army.

Home to the Provost Marshall over the whole U.S. Army.

Not only an Infantry battalion, but also an Aviation detachment is stationed on this base.

Overall Mission: Originally designed for the War of 1812, Watervliet Arsenal is one of the smallest military bases in New York.

Now does product development, research and testing, and manufacturing.

Does multiple levels of testing, from ballistic to cyberwarfare.

This is also where the Army does a lot of nuclear power training and research.

It is an important logistical waypoint for all branches of the Armed Forces.

Overall Mission: To provide that sector of the nation with Air defense.

Also trains air rescue teams for use domestically and internationally.

Provides relief and support in time of natural disasters both abroad and at home.

Overall Mission: They support homeland defense in the training of airmen and weapon systems.

They also do research and development into new forms of weapon systems.

Mainly their focus is on weapon systems and support systems in the air.

Overall Mission: Training of Air Force Pilots and the support teams that go with them.

Also houses one of the nation’s largest troop carrier groups that services all branches of the Armed Forces.

2 Reconnaissance groups are also stationed here, give air support to the nation and its allies.

Overall Mission: They provide vital support and logistics wartime and in peace.

Airlift operations for the military and emergency civilian needs.

One of the branches largest refueling wings is stationed on this base.

Stewart Air National Guard base is also considered one of the biggest military bases in New York.

Overall Mission: This is the base for support in research into the North and South poles.

Led by the National Science Foundation.

Mostly civilian operated, it does house 2 active military units that assist and support the scientific work being done from this base.

This base is home to one the largest divisions of Marines in the country.

This is mostly used as a training and transition base.

Overall Mission: Now is the base for the United States Lighthouse Board.

After the Lighthouse Board merged into the United States Coast Guard in 1939, the USCG moved all historic items to this location.

It now serves as a museum and storage facility.

Here they train all the incoming recruits to become Merchant Marines.

It is the equivalent of the U.S. Army’s West Point Academy, that produces only top tier officers.

Overall Mission: Home to Search and Rescue unit. Has military and civilian personnel.

Also, home to a USCG Law Enforcement unit. Here, is the duty of all personnel to watch over Long Island Sound and Long Island itself.

There are eight boat units in the Long Island Sound Sector, and Montauk makes up one of these units

Overall Mission: Part of one of 8 boat units in the Long Island Sound. Their duty is to watch over the Sound and Long Island.

Houses a Search and Rescue Unit as well as a small Law Enforcement Unit. It is one of the units in the Moriches Group.

They also offer support to Marine Environmental Protection efforts in the area.

Overall Mission: Search and Rescue team is based here. As well as a small law enforcement unit.

Part of the Coast Guard Sector Long Island Sound that is responsible for the area’s overwatch and port safety, ice breaking, waterway management and much more.

Overall Mission: This base provides air and sea patrols for the Fire Island National Seashore.

They provide maritime information for any boats and aircraft in the area.

Overall Mission: They are responsible for the South Coast of the Long Island Sound and surrounding waters.

They support Marine Environmental Protection groups in the sector.

They also have Search and Rescue and Law Enforcement units.

Overall Mission: Combining all 7 individual stations, you make up the New York Sector.

Their mission is protecting the waters, ports, and people of the New York Sector. 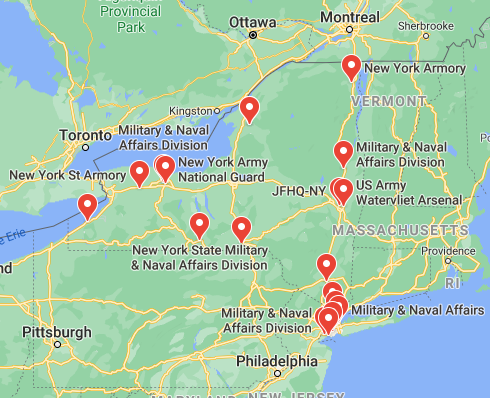 New York has a total of 23 major US military installations. Learn more about each military base in NY, including when it was founded, where it's located, and more.