South Carolina is a gorgeous location to live as well as has important heritage.

The state is renowned for its military history which makes it a fitting place to study.

There are a few top military schools in South Carolina that rival anything else the nation has to offer.

Camden Military Academy is considered one of the premier college preparatory schools in the country.

Meanwhile, The Citadel in Charleston provides a place to pursue undergraduate studies in a military structured environment.

Learn more about the best military schools in South Carolina based on reputation, academics, student to faculty ratio, and college placement success:

Related Article: How to Find a (Nearly) Free Military School

The military school is located in the heart of the South.

In fact, Camden, South Carolina, is the fourth oldest city in the United States.

For this reason, students that attend Camden Military Academy get immersed in an outstanding heritage and culture.

Most cadets that attend Camden Military Academy live and eat on campus with the option to spend 5 or 7 days per week on campus.

Camden Military Academy is open to grades 7-12 with separate dormitories for the middle and high school.

Additionally, students may wish to consider taking a post-graduate year before transitioning to another post-secondary institution.

The private military prep school exists on the campus of the former Southern Aviation School.

There were over 6,000 pilots that graduated from the aviation school, a tradition like many that is still honored at Camden Military Academy.

For this reason, classroom sizes remain very small with an average student to faculty ratio of 8:1.

Camden Military Academy is proud of its diverse student population which includes nearly 1 in 4 students of color.

The military academy is accredited by the Southern Association of Colleges and Schools (SACS).

The Corps of Cadets live on campus and participate in daily military drills and exercises.

Camden Military Academy has a strong and proud athletic tradition.

Additionally, the school is popular for its Boy Scouts of America and Civil Air Patrol organizations.

Furthermore, the Blackjacks drill team is something to consider if you are interested in the military aspect of the school.

Lastly, cadets may take part in Junior Leadership which is a terrific opportunity to develop the skills that will help you excel in life.

Camden Military Academy provides one of the most affordable boarding school tuition rates in the country.

The military school in South Carolina understands that most families need tuition assistance to cover the studies for their son.

The amount of tuition will depend on the payment plan and how quickly the family expects to pay back the amount owed.

The most affordable route (Full Payment Plan) costs nearly $27,000 per year to attend which includes tuition, room and board, and uniforms.

On the other hand, the alternative payment plans raise tuition costs slightly yet also present families with more time and flexibility paying back the education costs.

There are numerous avenues to pursue to raise funds for your child’s education from a 529 Plan to applying for private loans.

Students should consider applying in advance as the military academy is very selective.

The Citadel, The Military College of South Carolina, is usually shortened to its common name “The Citadel”.

The military college exists in legendary Charleston, South Carolina, and has origins that date all the way back to the mid-19th century.

It is 1 of 6 senior military colleges in the United States that also includes nearby Virginia Military Institute as well as Virginia Tech.

The Citadel features a diverse range of academics with nearly 20 different departments.

All in all, there are five colleges within the university that offer 23 majors and 38 minors.

The Citadel structures its academics and learning environment utilizing a military model.

For this reason, cadets pursue a bachelor’s degree while living on campus and participating in drills.

However, military participation is not mandatory and there are non-military programs on campus.

The Citadel is a phenomenal opportunity regardless of whether you decide to pursue a career in the military or not.

The Citadel separates its academics into 5 schools: Business, Education, Engineering, Humanities and Social Sciences, and Science and Mathematics.

Students may pursue majors in nearly 40 different programs as well as specialize further in a variety of minors.

The Citadel also features a graduate school with 26 different master’s programs and over 40 different concentrations.

The military school in South Carolina maintains small class sizes (student to faculty ratio of 12:1) with the vast majority of faculty holding some type of doctorate.

Cadets are required to live on campus if they plan to participate in the South Carolina Corps of Cadets.

Furthermore, The Citadel recently introduced a new veterans program that assists military retirees in returning to school to complete their degrees.

It is also not uncommon for active-duty personnel in the Marine Corps and U.S. Navy to attend classes at The Citadel while they serve the country.

The student population at The Citadel is fairly diverse with women comprises approximately 10% of the enrollment.

Moreover, nearly 1 in 4 cadets at The Citadel is a person of color.

Residents of South Carolina make up nearly half of the student population though cadets come from all over the nation and world.

There is a huge advantage to in-state residents as tuition rates are far more reasonable.

The South Carolina Corps of Cadets is one of the largest uniformed bodies in the United States.

ROTC participation is mandatory at The Citadel, however, there is no service obligation after graduation unlike the federal service academies.

Nonetheless, a substantial portion of the student population seeks commissioning.

The Corps of Cadets has approximately 2,300 members each semester, designating the ROTC program as one of the leading sources for military commission from a non-federal service academy.

The military school in South Carolina commissioned nearly 200 officers in its 2019 graduation class.

Physical challenges and military discipline are the hallmarks of The Corps of Cadets at The Citadel.

Cadets that are members of the ROTC program are the only students permitted to live on campus.

The Citadel also competes in NCAA Division I athletics in the Southern Conference.

Cadets are encouraged to participate in intramural sports as well as support the Bulldogs in varsity athletics.

The Citadel ranks among the best military schools in South Carolina, especially because the in-state tuition rates are reasonable.

Admission is granted to The Citadel based on the type of studies.

For example, there are different requirements depending on if you want to enroll in the South Carolina Corps of Cadets compared to the graduate or veterans program.

It costs money to apply to The Citadel so you’ll want to make sure the school is the right fit.

The Citadel has varying tuition rates depending on the type of student.

Those that enroll in the South Carolina Corps of Cadets encounter two different rates depending on if the student resides in-state or out-of-state.

Furthermore, the tuition rate fluctuates depending on if the student is a freshman or upperclassman.

The out-of-state tuition rate is far higher as freshman need $53,650 per year while upperclassman need to reserve $48,350.

Complete tuition rates and other budgeting considerations are available through the official website.

There are many types of financial aid available to students that need tuition assistance like any college or university.

Contact the admissions department at The Citadel for more information on financial aid and make sure you complete the FAFSA.

The institution distinguishes itself from other prestigious military schools in South Carolina because its a public offering.

Therefore, male and female students that reside in North Charleston or the nearby region qualify for admittance.

The military school is divided into two campuses: one for the middle school and one for the high school.

The public school is different from other offerings in the area in that students are expected to wear uniforms and participate in JROTC.

Additionally, the JROTC program assists in developing leadership abilities and other skills relevant to the real world.

Military Magnet Academy is considered a leadership school which distinguishes itself from the more typical discipline or boarding schools.

The Center for Advanced Studies (CAS) is a new classroom that features different tech-based studies.

Military Magnet Academy in South Carolina has a mission to achieve academic excellence, promote self-discipline, and develop citizenship in every student that attends the public school.

The graduation rate at Military Magnet Academy is incredibly high (95%) and helps close the achievement gap between struggling schools and students.

Cadets that graduate from the school have the opportunity to earn a Military Seal of Distinction.

While all cadets are required to wear uniforms there are many advantages to attending the military school in South Carolina.

For starters, there is no tuition as the Military Magnet Academy is 100% a public school.

Therefore, parents will save thousands a year compared to enrolling a son or daughter in a private military boarding school.

Students must reside within the North Charleston School District to qualify for attendance. 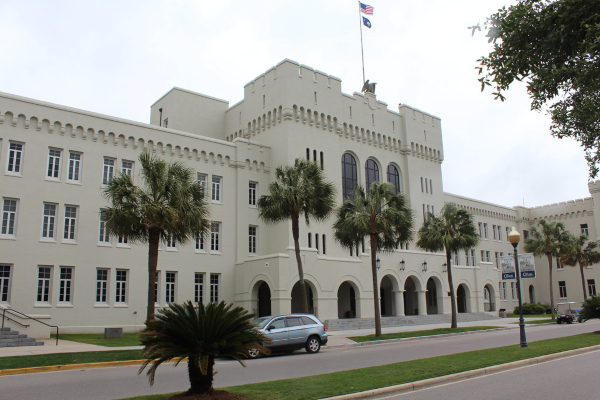