However, the Marines are organized similarly to the Army, except it has a ‘rule of three’ that follows in its organization, reflecting in the chain of command.

Also, there are two different sections in the Marine Corps chain of command that parallel one another.

Related Article – Army Vs Marines: 5 Big Differences Between Both

The service chain of command handles everything that only impacts the Marines.

The operational chain of command directs forces and missions.

In this case, there is the involvement of other military services.

The President of the United States (POTUS) is also referred to as the Commander-in-Chief.

He or she is the head of all the military branches.

The Secretary of Defense answers the President of the United States and handles its operation and administration.

Also, the Secretary of Defense is currently Christopher Miller.

However, expect this to change in January 2021 because of the incoming president-elect.

Secretary of the Navy

The Secretary of the Navy is the Honorable Kenneth J. Braithwaite.

Also, the Secretary of the Navy handles everything related to the Department of the Navy, which includes the Marine Corps.

Commandant of the Marine Corps

The Commandant of the Marine Corps is the highest-ranking officer in the Marines. Currently, General David H. Berger holds this position.

In this position, General David H. Berger reports directly to the President and the Secretary of Defense and Navy.

The Combatant Commands (COCOMs) are located all over the world. The commanders of the COCOMs handle the operations in their particular areas.

There are four categories to Marine’s organization, which is managed by the U.S. Marine Corps Headquarters.

When you consider the Marine chain of command, you start with the smallest component.

For example, you first go to the team leader in your fire team before the Sergeant of the squad.

A Fire Team in the Marines consists of three Marines with a team leader in charge.

Also, the team leader is often a Corporal.

Moreover, you will find the fire team having a rifleman, an automatic rifleman, and an assistant rifleman.

Also, all three of these members answer to their team leader.

A Sergeant leads a squad, although there are times the squad leader is a corporal, however.

Also, the squad leader plans missions and carries out orders given by the Platoon Commander.

Furthermore, there are three teams in a squad, but a squad is sometimes called a section.

In the end, the squad has three fire teams in total, and each squad goes up their chain of command starting with their team leader, then onto the squad leader.

Three squads make up a platoon, and the commander is often a Lieutenant.

If you are looking at a rifle platoon, you will see the three squads and the platoon commander.

However, often there is an addition of other teams, such as a two-person mortar team.

Therefore, the numbers in a platoon might fluctuate with the additional support.

In any case, the chain of command starts with the smallest grouping and moves up.

Three or more platoons are a company, and there are about 243 Marines in a platoon.

Again, that number fluctuates with support teams and Company and Platoon needs.

Typically, a captain will command a company.

Also, there is an Executive Officer, First Sergeant, and a Gunnery Sergeant apart of the Company Headquarters chain of command.

After the Headquarters CoC, the chain of commands goes down the ranks to the highest position in charge of each grouping.

Commanded by a Lieutenant Colonel, there are, on average, three companies in each battalion.

However, depending on the need or situation, there could be up to five.

No matter the size, the chain of command goes up from the smallest part of the organization on its way up to the battalion’s commander.

A regiment in the Marines is commanded by a Colonel and includes three battalions.

The colonel is often assisted by a lieutenant colonel, a major, and several staff officers that make up regimental headquarters.

Also, a regiment is also called a brigade, and there are approximately 2,187 Marines in the regiment.

However, the size depends on a lot of factors, as already discussed.

The Marine regiments fall into the following:

A Marine Division is comprised of three regiments.

However, the total size of a division varies because not all brigade sizes are the same.

Also, with a Major General as a commander, there are four divisions in the United States Marines.

Each division has a commander, an assistant commander, a Sergeant Major, and a Commander Master Chief as part of the chain of command.

All of these Marine Divisions come together at the top of the Marine chain of command.

At the top of the chain of command is General David H. Berger, who reports to the Secretary of the Navy.

There are two exceptions to the basic unit of the Marine Corps.

The Marines also have their aviation section. The commands here are squads, groups, and wings. 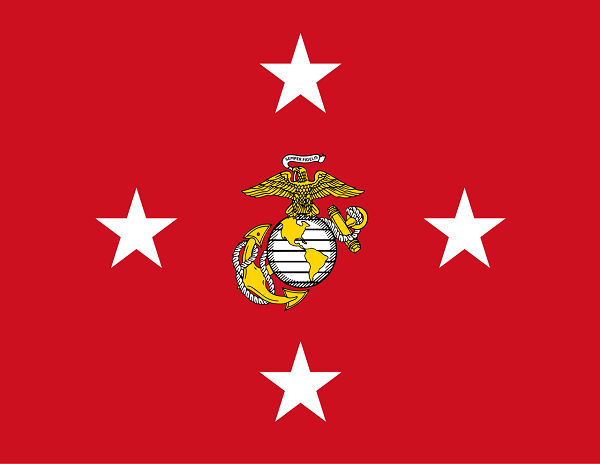 Learn more about the chain of command and organization structure of the United States Marine Corps. Includes a brief description of every link in the chain.

One Reply to “Marine Chain of Command”