Also, while there are several similarities between the different military wedding traditions, there are differences.

Also, there are several benefits to having a military wedding, but you have to ensure you understand some of the nuances before you start planning.

The Army has the Arch of Sabers, which is a salute to a new couple.

Usually, the arch happens outside the church or other locations of the wedding.

This military tradition happens outside the venue because any weapon is not allowed in places of worship, even if the weapon is ceremonial.

For this tradition, wedding guests leave the venue first so they can observe the tradition.

Often, ushers carry out this tradition, and the ushers are often service members and are allowed to perform the ritual.

The head usher will call out ‘arch sabers’ before the newly married couple emerges from the venue. The sabers raise up with tips touching and sharp side up. The new couple walks out and under the drawn sabers.

This tradition is to symbolizes a safe passage into their new lives.

Then, the head usher calls out, ‘return swords,’ and they re-sheath their sabers.

Next, the ushers escort bridesmaids.

This tradition could be inside if the venue is not a place of worship.

If this is the case, the ushers line up with the bridal party at the front while facing one another.

With sabers raised, the couple pass under the arch.

A playful addition to this tradition is when the last two men of the arch lower swords briefly hold the couple.

Then, the second to the last usher lowers the sword and gently swats the bride, unless she is a member in the Army, on the rear while saying, ‘Welcome to the Army.’

Most Army bases have chapels, and these chapels are available for weddings.

However, every chapel has its own standard operating procedure for weddings.

However, you can expect many of the same rules.

The wedding party is responsible for the cleaning of the chapel.

For instance, any item taken in must be removed.

Also, the newly married couple is responsible for returning any floral arrangements or décor to its original location.

Usually, service members can use the chapels for free, but donations are accepted and consider common courtesy.

Furthermore, there are usually prohibited items such as birdseed or the use of nails or tacks.

The Navy and Marines have similar traditions, especially regarding the sword arch.

Where the Army and Air Force refer to the arch as a saber arch, the Navy and Marines call it the Arch of Swords.

Also, this tradition relates to an English and American custom, which symbolizes loyalty from the military branch to the couple.

Ushers can perform the Arch of Swords, and it takes six to eight people to perform the arch.

Usually. the performers face each other at the bottom of the venue’s stairs or outside the door,

The person most senior in rank is furthest from the door.

However, it is important to note the swords are sheathed until it is time to perform the arch.

The command is “Officers, Draw Swords,” and the swords are drawn and raised. Then, the command ‘invert swords’ leads to the shape side of the swords turning upwards.

Once the couple passes through the arch, the words are sheathed again.

The Air Force follows similar traditions as the Army.

For instance, the Arch of Aabers is the same, with a couple of notable differences.

One notable difference is that the saber bearers cannot be in the ceremony as ushers as they can in the Army.

The saber bearers are the head of the processional line of the wedding. The chaplain or other officiant is at the venue’s front, and the saber bearers form two lines in front of the officiant.

Then, they turn to face one another before turning again to face the guests.

At this point, they can see the couple coming towards them, and as the couple passes, the saber bearers turn towards one another.

Once this process is over, the sabers go back into their sheaths.

Those who serve in the military and attend a military wedding traditionally wear their dress uniform instead of a suit or tux.

However, it is essential to remember your involvement in the military does not obligate you to have a military wedding.

For instance, being a soldier does not mean you must forgo a white dress for your military dress uniform.

However, if you decide to take the military wedding traditions route, those in uniform cannot wear a boutonniere.

Military decorations take the place of flowers because you cannot add anything outside of military regulation to your uniform.

Lastly, keep in mind, if you wear your military dress uniform, you must comply with your behavior while in uniform.

Essentially, watch your alcohol intake for the evening or change before the reception.

Where are military weddings held?

As mentioned, you can have your military wedding anywhere.

Some couples prefer to use on-base chapels, while others choose a venue off base.

Military weddings are no longer than civilian weddings.

Essentially, the ceremony itself runs in accordance with religious beliefs, If any.

For instance, if the soon-to-be newlyweds are catholic and opt for the whole mass with communion, the wedding might be longer than expected.

If the wedding couple prefers, a military chaplain can officiate a military for free. However, it is customary to donate to the chapel.

However, if you use a military chaplain, know that they may expect a premarital counseling session to give relationship advice and go over the ceremony’s expectations.

Are there different seating arrangements?

If the guestlist for the wedding has a lot of distinguished guests, it is vital to ensure you are mindful about rank when doing the seating arrangements.

Also, military personnel might all sit together near the table of honor.

However, the highest-ranking military members receive the best seating arrangements at the reception and the wedding ceremony itself.

How do guests get on base for the wedding?

If your wedding is on-base, you need to gather all the guests’ names and the last four of their social security numbers.

Each installation has its own process for handling those who come on base for the wedding, so be sure to communicate with the installation’s Protocol Office and the Visitor’s Center for specifics.

While different military branches have different traditions, you are likely to see many similarities.

One common tradition is the saber or sword arch.

Often, military members wear their dress blues at the ceremony.

However, it is common to change before the reception, because moderating alcohol intake during the reception is expected when in uniform.

Also, many couples choose to have their ceremony on base with a military chaplain officiating.

However, this is a personal preference, and you are free to make your wedding your own. 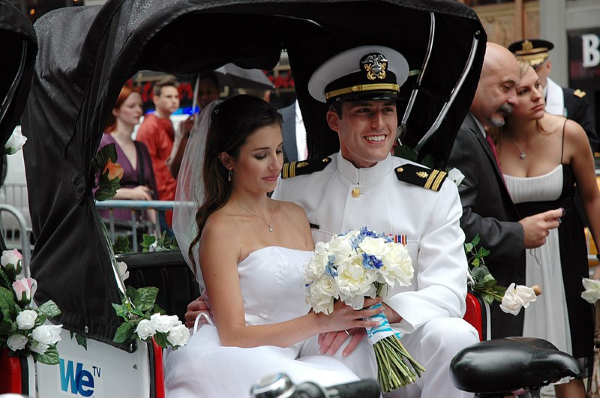 Learn more about the wedding traditions for the US Army, Navy, Air Force, and Marine Corps. These traditions have been carried on since the inception of the US Armed Forces.