If you serve or are about to head off for boot camp, you may notice that those in the military seem to speak a foreign language.

For instance, you might hear the military term NODS and wonder what it means.

The term NODS is an acronym that stands for a piece of military equipment necessary to see in low-light conditions.

AKA night-vision.  Learn more about the term below, including what it stands for, its history, and more.

Related Article – What Is A POG In The Military?

What does NODS stand for in the Military?

The term NODS is an acronym for Night Observation Devises, although sometimes it stands in for Night Optical Devise.

A common NODS military devise for the Navy is the AN/AVS-6 vision goggle.

More recently, the Army is looking at the L3Harris ENVG-B, which mounts to a helmet and is a dual waveband night goggle.

There are several more type of NODS as well, including:

No matter which brand, they tend to have some overlapping features.

Also, the use of Night Observation Goggles is commonly used by the US Military during operations.

For instance, SEAL Team 6 (aka DEVGRU) wore NODS when they raided Osama Bin Laden’s compound in 2011.

Also, the Persian Gulf War in the 1990’s was most fought during the night.

Therefore, the United States military utilized NODS to ensure their campaigns were a success.

For a long time, the United States military dominated with night-time fighting partially because of technology.

However, these days plenty of our adversaries utilize the same technology.

Night vision and low-light devices go way back to the late 1930’s. The Germans started experimenting with infrared night vision on tanks.

Around the same time, the United States began to work on its own technology to make seeing possible for snipers and other troops in low-visibility situations.

By the 1960’s, the United States was using NODS during the Vietnam War.

Since the beginning, subsequent versions of NODs that have allowed troops to see in low-light conditions have continued to improve.

These days, NODS include technology such as sensors, thermal optics, image intensifiers, wireless connectivity, and even the ability to switch their views.

Why are they called NODs?

This holds true for several other military items, like the ones below.

Related Article – What Is A Navy Squid? 11 Slang Nicknames For Navy Sailors

Other Sayings for Military Equipment

There is a never-ending flow of military slang, terms, and jargon to explore. We gathered up a few.

An IED is an Improvised Explosive Devise. Essentially, it’s a homemade bomb.

The Navy spends a lot of time on the water, so water training is necessary.

The SEALs have a closed-circuit breathing device called the Full range Oxygen Gas System or FROGS.

Anyone spending any time out in the field knows the giant water tank, often on a trailer, contains potable water. Got to fill the canteens somewhere.

Those who carry the .50 caliber machine gun may refer to the M2 as a ‘fitty’ as a play of the caliber size.

While military issue eyeglasses are not top on the list of military equipment, they deserve mention.

When recruits go to basic training, they see an optometrist if they wear prescription eyeglasses.

Since the military values uniformity, everyone gets the same style of glasses.

Recruits refer to these glasses and Birth Control Glasses, or BCGs because they pretty much guarantee abstinence.

BCBs evolved a while ago to a more updated frame, but they still are nothing to write home about.

These devices help our military personnel see in low light conditions such as night-time, smoke, or even dust.

There are several different types of NODS between all the military branches.

The history of NODS goes back to World War II, although it is safe to say the technology has evolved exponentially since then.

If you have any questions on any of the above, feel free to leave a comment below. 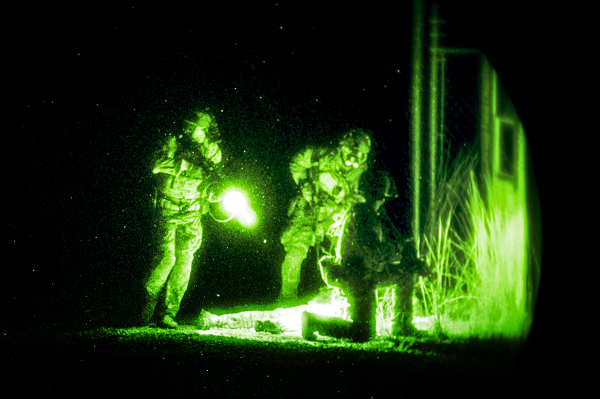