The military is constantly evolving when it comes to innovations in equipment and gear for its troops.

One of the most significant of these innovations is the poncho liner, also affectionately known to service members as the military “woobie” blanket.

Poncho liners came into use during the Vietnam era, and they continue to be issued to troops deployed in the field as a means of protection and even comfort.

Here are 7 things you should know about this useful, versatile, and beloved military woobie blanket.

1. What Is A Military Woobie Blanket?

A military woobie blanket is a nickname given to the official military gear called the liner, wet weather, poncho.

This poncho liner is made up of two layers of nylon that surround a filling made of polyester batting.

The liners are sewn and quilted such that they become a resilient and durable piece of military equipment.

They are like a blanket in their efficiency of keeping body heat in and cold temperatures out.

The poncho liner was created in response to the needs of troops fighting in the Vietnam War during the 1960s.

The wet, tropical climate of Vietnam called for something lightweight to keep soldiers dry and provide warmth on cool nights.

Since then, military woobie blankets have been an essential standard of gear and source of comfort for many service members.

2. History Of The Military Woobie

The history of the military woobie originates with the use of ponchos as standard field equipment issued by the U.S. Armed Forces.

Ponchos were put to use by the U.S. military in the mid-nineteenth century as a form of waterproof protection for forces assigned to the Western Plains.

During the American Civil War, ponchos were issued as field gear for soldiers to use as sheets on the ground for sleeping and uniform protection during wet weather.

Across the next few decades, ponchos were issued to troops off and on depending on the environment in which they were serving.

By World War II, ponchos had been improved in their design and material and were used by most U.S. troops as protection from the elements in the field.

It wasn’t until the early 1960s that poncho liners were allocated to special forces troops in Vietnam.

These liners were an effective replacement for the standard Army wool blanket.

They were light, made from quick-dry material, and could be packed into very small spaces.

This was unlike Army blankets which were cumbersome and nearly useless in the tropical climate of Vietnam.

Eventually, poncho liners were supplied to other troops during the Vietnam conflict.

They were appreciated for providing warmth at night, convenient storage during the day, and especially for their quick-drying material.

Though the label “woobie” seems strange to apply to a piece of military equipment, no one knows for certain why or how this poncho liner came to be known by this title.

Some theorize that the term originated with a 1983 movie called “Mr. Mom,” starring Michael Keaton.

In the movie, the youngest boy is devoted to his security blanket which he calls his “woobie.”

You can see the scene where it’s referenced below:

The prevalence of the term woobie in the military took root in the 1990s, a few years after “Mr. Mom” debuted.

Others theorize that the poncho liner came to be known as a “woobie” due to the phrase “you would be cold without it.”

In this case, “would be” may have been shortened to “woobie” which may then have been applied as a fond nickname for the poncho liner.

4. How Are Military Woobies Used?

Since their inception, most service members consider the woobie to be among the most important, versatile, and useful of all standard issue military gear.

In the field and on deployment, service members use military woobies in many ways, including as:

5. Why Are Military Woobies Beloved?

Military woobies are beloved for many reasons.

Some troops go so far as to refer to their woobies as security blankets.

However, it is the remarkable usefulness, reliability, and practicality of the military poncho liner that makes it such a beloved gear item.

The military woobie is resilient in situations of extreme heat and cold.

It dries quickly after getting wet and can preserve a person’s body heat even when wet.

In addition, it takes up almost no room when packed and weighs almost nothing.

This is significant considering most troop rucksacks weigh in the vicinity of 100 pounds.

Military woobies are also beloved due to their history as symbols of military innovation, tradition, lineage, and sacrifice in the name of service.

In fact, many poncho liners used in Vietnam were made from recycled camouflage parachute material that was left from World War II.

The legacy of the camouflage pattern for poncho liners continued long after the military stopped using recycled parachutes for material.

6. What Happens To Military Woobie Blankets?

Most equipment issued by the military is happily returned by personnel at the end of their service.

However, many veterans decide to keep their woobies once they leave the Armed Forces.

This attachment to the poncho liner may reflect what it comes to represent for so many soldiers, sailors, airmen, and Marines when deployed or in the field.

Woobies provide dry, warm, and soft comfort in environments and situations where a sense of safety or the security of home may be far away.

In addition, there is a tradition among many veterans of passing down their woobies to their children as a memory of their service.

A significant number of troops deployed in the past few decades report that they have their fathers’ Vietnam woobies with them.

Of course, there are practical uses as well for woobies outside of the military.

This may explain why some veterans hang on to them.

However, it appears that sentiment is an important factor in what happens to military woobie blankets.

7. What About Civilian Woobie Blankets?

A simple Google search for “woobie blankets” reveals that civilians can also purchase and benefit from this military innovation.

Many versions of the woobie are sold online, varying in fabric, color, quality, and price.

Civilian woobie blankets are marketed to hunters, campers, and other outdoor enthusiasts as protection during cold and/or wet weather.

Other suggested woobie uses for civilians are as outdoor blankets for picnics or stadium events or indoor blankets on your bed, couch, or even floor. 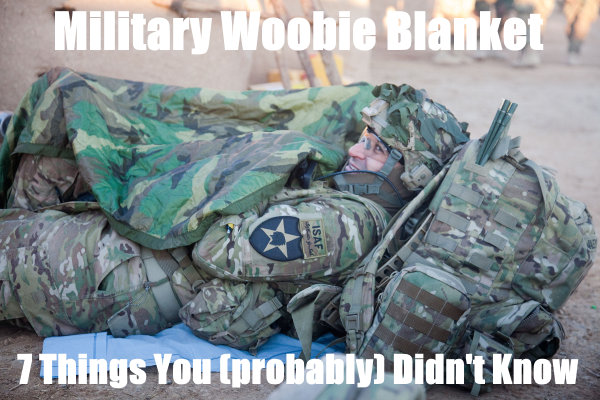 Learn more about the military woobie blanket, including what it is, its history, why it's called that, and more.