Military call signs are a rite of passage for many who serve in the Armed Forces.

Call signs are unique names used to identify one another during radio communications.

Sometimes the call signs are random, and the moniker results from cobbling shortened names, abbreviations, and nicknames.

Sometimes a call sign reflects an unusual experience or embarrassing moment witnessed by those who decide call signs.

However, in some situations, call signs are assigned daily to positions and used during radio communications.

The personal call signs, which are nicknames, are used extensively in most military branches.

Typically, a person does not choose their military call signs.

Instead, your friends choose one on your behalf.

We searched and discussed putting together some of the best military call signs ever.

One pilot had the unfortunate experience of taxing his aircraft into a wall instead of navigating his turn.

His ‘buddies’ refer to him as Berlin as in the Berlin Wall.

The Air Force has a heavy bomber, the B1, called ‘Bone’ because when you look at ‘B-one,’ it looks like ‘bone’ when spelled out.

Another guy’s last name is Sanchez.

Therefore, his call sign became ‘Dirty.’ We’re going to set that one down right here and let you figure out what it means.

Col. Douglas Demaio has incredible luck with the last name ‘Demaio,’ which sounds a lot like ‘de mayo.’

This leads to the obvious call sign of ‘Cinco.’

One thing you can say about the south is it is too hot to move very fast.

However, if you are from the south and talk slow, you might also earn the call sign of ‘Coma.’

A lieutenant has the last name of ‘Love.’

One soldier reports his squadron’s call sign in ‘Ghost.’

Therefore, the chaplain has the call sign of ‘Holy Ghost.’

A female pilot with noticeable red hair has the call sign of ‘SHOCK,’ which stands for Strawberry Headed Ovulating Commie Killer.

Incidentally, her husband’s call sign is ‘Mach,’ and the running joke is SHOCK comes before Mach.

A solder with the last name of Plaisier earned the fantastic call sign of ‘Oral.’

It is worth mentioning you pronounce his last name ‘pleasure.’

One particular soldier had a difficult time remaining upright after a night of drinking.

He missed a curb and fell on his face, which earned him the call sign of ‘lawn dart.’

While not an actual call sign, the term Phantom refers to the 9th Armored Division during World War II.

During the Battle of the Bulge, the 9th had a talent for materializing everywhere along the front lines like a phantom.

During the Iraq war, the 3rd battalion, 27th Field Artillery Regiment, would release their Multiple Launch Rocket System that sent a rocket out that would explode into a bunch of smaller little bombs.

The Iraq soldiers would call the little bombs ‘steel rain.’

Therefore, the 27th Field Artillery Regiment took on the nickname.

If you have the unfortunate problem of an unpronounceable name with a whole lot of letters, expect your military call sign to be ‘Alphabet.’

A soldier with the last name of ‘Dude’ received the call sign of ‘The.’

He became The Dude or His Dudeness, or El Duderino in his spare time.

A soldier reports his company name is ‘The Nasty,’ and he operates an excavator known as the ‘Hoe.’

Put it together, and you have ‘Nasty Hoe.’

However, Major Gonzalez scored the moniker after shooting as his evaluator during training.

Mad Dog refers to an AIM-120 advanced missile that does not have a target in mind. It just takes down whatever it finds, even if it’s friendly.

A pilot during training unfortunately blacked out. The instructor had a heyday with it.

Like one particular soldier, if your last name is Ding, do not be surprised if your call sign is ‘Dong.’

A pilot crashes an SR-10 trainer, and his only comment in the chaos is ‘ouch.’

A few weeks after D-Day in Normandy, the 28th Infantry Division landed on the beach.

The 28th earned a reputation because of their fighting skills when they could reclaim the beach in Normandy.

The Germans called the 28th Infantry Division ‘Bloody Bucket’ because of the red insignia on their uniforms.

What is a POG in the Military?

What Does Oscar Mike Mean? 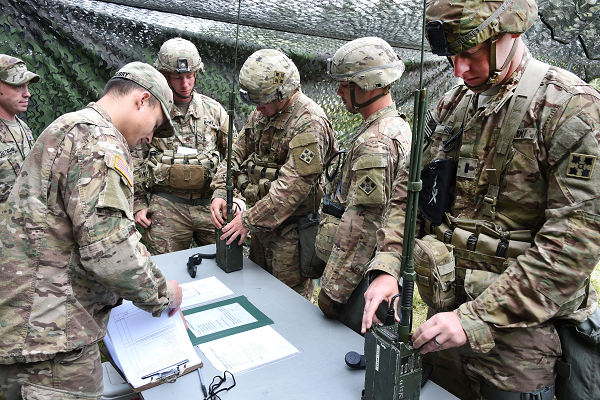 See a list of the 20 most cool, badass sounding call signs ever. They include callsigns such as G-Force, Bloody Bucket, Mad Dog, and many more.