Join the Navy! See the world!

In the age of the aircraft carrier, naval aviation is one of the key missions of the United States Navy.

All of those aircraft need control and guidance from the ground to fly safely.

This is why the Navy Air Traffic Controller is such a vital part of the Navy’s force.

What is a Navy Air Traffic Controller?

In simple terms, a Navy Air Traffic Controller, or AC, monitors and directs aircraft during takeoffs and landings.

This job in the Navy is anything but simple.

In the Navy, air traffic controllers have the added challenge of doing all of this at-sea onboard a ship, often in support of combat operations.

Those stationed ashore at Naval Air Stations are juggling 24 hour operations, with flights coming and going at all hours to support the Navy’s mission.

Being a Navy Air Traffic Controller comes with a lot of responsibility and the qualifications to apply to the program go beyond what is expected of others enlisting in the Navy.

Anyone choosing a specialty in the Navy, called a rate, is required to score at a certain level on the Armed Services Vocational Aptitude Batter, or ASVAB.

This is one of the higher testing requirements in the Navy.

According to the Navy’s guidance for those interested in becoming an AC, a good candidate will enjoy working in a team environment.

They will also be detail-oriented and have a good memory. They will also need to be comfortable working with mental math, computers, and maps or charts.

Many jobs, or rates, in the Navy require advanced training.

This means that new recruits who are approved to pursue that career are sent to A-school after they complete basic training or when they are selected for the program.

They will study the fundamentals of air traffic control, radar technology, and communicating by radio.

All of these are essential skills they will need on the job. They will participate in group instruction and simulations.

They are also required to pass a written test before being allowed to control aircraft.

After they graduate from A-school, new air traffic controllers are still required to complete on-the-job training, or OJT.

This includes hands-on training opportunities, lectures, and individual training provided by experienced leaders in the field, and is typical of all Navy jobs.

Navy Air Traffic Controllers enjoy similar pay and benefits to others in the military, with basic pay, housing allowances (BAH), and subsistence allowances (BAS) based on their rank and time in service.

Those with dependent family members on their official record receive higher housing and subsistence allowances. 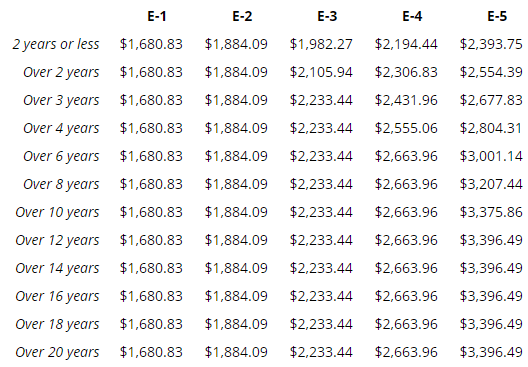 An E-4, or Petty Officer Third Class, can expect to make around $2300/month in basic pay, with housing allowance based on the cost of living in the area they are stationed.

Additional pay incentives may be available for those in particularly challenging or hazardous areas.

These include tax benefits for those serving in a designated combat zone. Sea pay is also given to those in deployable, sea-going units.

Family separation pay is provided when official Navy duties require a service member to be away from their family for a prolonged period of time.

Being a member of the military comes with full medical and dental coverage, for both the service member and their immediate family members.

This includes everything from routine exams to prenatal care, as well as treatment of injury and illness.

Add to that the college tuition benefits available to those serving 90 or more days on active duty through the GI-bill—the financial benefits of a military career can make it a great choice.

So where do ACs work?

The answer is all over the world.

Most ACs spend at least some of their career on ships, in support of aircraft operations at-sea.

However, the majority of a Navy air traffic controller’s career is spent ashore. “During a 20-year period in the Navy, AC’s spend approximately 30 percent of their time assigned to fleet units and 70 percent to shore stations; many of the shore stations may be located overseas,” says the official info card on the AC rating.

Navy Air Traffic Controllers will be assigned to shore stations that have a flight facility, such as an air station.

Related Article – List Of Navy Bases In The US

Working as an AC will mean detail-oriented mental work. “ACs usually work in clean, office-like environments at naval air stations and on-board aircraft carriers,” reads the Navy info sheet. “They work closely with others, are closely supervised, and do mostly mental work.”

Navy Air Traffic Controllers have a lot of responsibility and must adhere to strict safety standards.

This includes showing up to work on time, maintaining qualifications, completing required training, and adhering to high military standards.

Those working in the field often cite the challenges to family life as one of their biggest challenges with a career as a Navy air traffic controller.

Deployments, long hours, and time away from home mean that the military lifestyle is not for everyone.

The benefits that many of those same reviewers had included the skills that they learned and how applicable they are to a civilian career, great pay and benefits, and opportunities for advancement.

Life After The Military

One of the biggest benefits of working as a Navy air traffic controller is the opportunity for an exciting career after the military.

Civilian air traffic controllers can expect to make a median salary of $124,540 per year, according to the Bureau of Labor Statistics.

Combined with the training completed (and paid for) in the military, this means a great job opportunity.

The field is expected to grow by 3% by 2026, which is less than the average across all occupations.

However, the BLS noted that “those with military experience as an air traffic controller may have an advantage” during the hiring process.

The Navy COOL program also provides information on applicable credentials through civilian agencies that a military member may be able to apply for.

Navy ACs are eligible to apply for the Federal Aviation Administration’s Air Traffic Control Tower Operator and Aircraft Dispatcher certifications, based on their years of experience and passing written tests.

Civilian apprenticeship certifications may also be awarded, based on experience and work completed in the Navy, through the United States Military Apprenticeship Program, or USMAP.

All of these programs help military air traffic controllers transition to civilian careers with competitive resumes, for free.

There are a lot of benefits and challenges to working as a Navy air traffic controller.

Becoming a Navy air traffic controller is no easy task. It requires high qualifications and advanced training. But the stimulating work and high job prospects in the civilian sector make it a great option for those interested in a career in aviation. 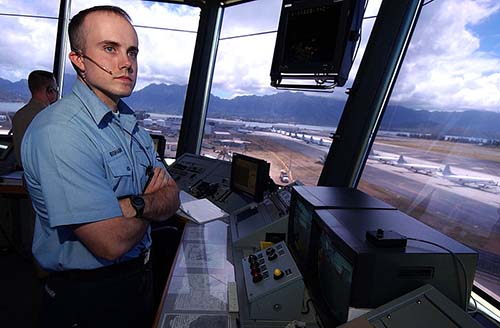 Learn more about what it takes to become an Air Traffic Controller in the Navy, including the requirements, training, pay, and more.